SPORTS Participation in winter activities snowballing as Beijing Games near

Participation in winter activities snowballing as Beijing Games near

"Ready, set, ski!" declares Li Shengda as he enthusiastically launches himself down a ski slope in Sichuan province. 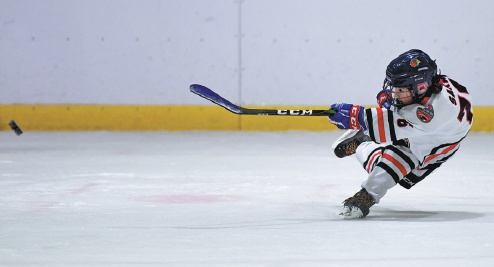 A kid lets fly with a shot during an under-8 tournament as part of the Beijing Junior Ice Hockey Club League on Sunday. The league has attracted over 3,000 children, playing for 213 teams from 24 clubs. WEI XIAOHAO/CHINA DAILY

"I love the high altitude and the soft snow here. The feeling of skiing is so great, just like riding a motorcycle," the 27-year-old said. "I am totally enchanted by skiing."

According to Chen Wei, marketing manager of the resort, there were few professional ski clubs in Sichuan back in 2013 when he first went into the business. Now there are five clubs, boasting over 3,000 members.

"People in the south have a fascination with snow, and everyone knows the 2022 Winter Olympics are approaching," Chen said.

Winter sports were once deemed a foreign and unaffordable pastime in China, but now skiers like Li, who can carve gracefully down beginner runs, are increasingly common on the country's slopes.

Chinese people are picking up skis and snowboards in record numbers, with the 2022 Olympics igniting unparalleled enthusiasm for winter sports in the world's most populous nation. In 2019, more than 13 million Chinese experienced skiing, of which 72 percent were first-timers, according to an industry white paper.

By 2022, the ski market is expected to be worth 26 billion yuan (about $4 billion), a near fivefold increase from 2015 when Beijing won the bid to host the Winter Olympics.

A research report showed that 150 million Chinese participated in ice and snow sports last winter, halfway to the country's participation target in the buildup to 2022.By then, the country will boast 650 skating rinks and 800 ski resorts.

Massive investment is driving the booming industry, with key areas such as Chongli, a mountainous district in Zhangjiakou, Hebei province, now linked by high-speed railway to downtown Beijing.

After several attempts, 10-year-old Wang Jiangrong finally pulls off a backside turn on her snowboard at the end of a lesson in northwest China's Xinjiang Uygur autonomous region.

The little girl signed up for a five-day boot camp for rookies during her winter holiday. "To build up my body, my mom recommended the snowboarding course," said Wang. "The course is not easy, but it was a lot of fun."

More Chinese kids are enjoying ski resorts and ice rinks, as some 2,000 primary and secondary schools had included winter sports in their curricula by the end of 2020.

Although the lack of snowfall is an issue across large swathes of China, the mushrooming facilities mean winter sports are no longer a luxury for people in the freezing northeastern provinces.

Even in places such as Shanghai in the east and Shenzhen in the south, people have regular access to training sessions for skating, ice hockey and other winter sports.

East China's Jiangsu province has built 42 venues for ice and snow sports, and aims to encourage over 300,000 students at 1,000 schools to engage in ice and snow sports by 2024, according to the Jiangsu Ice and Snow Sports Association.

Every winter since 2014, Yanqing district in northwest Beijing has offered skiing courses for around 3,000 local students.

"Most students in my school come from rural areas. They had no chance to participate in winter sports in the past. Skiing can keep their body and mind strong and ignite their passion," said Zhang Wenxue, a primary-school teacher in Yanqing.