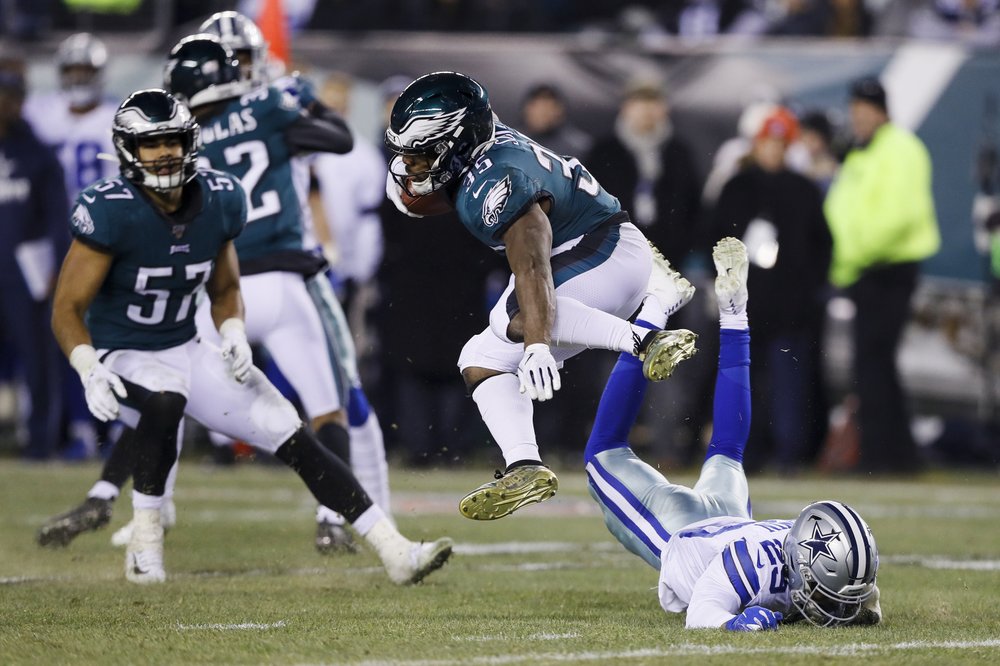 Of all the teams already in the playoffs and the ones that might make it, there’s one that exemplifies all that can be right about sports.

So as we look ahead to the final week of the NFL season, it’s proper to throw some love at the team from the City of Brotherly Love.

The Eagles (8-7) have won three in a row despite a roster that sometimes resembles what teams throw on the field in summer exhibitions. Their gritty win over Dallas on Sunday to take the NFC East lead followed just as plucky performances in edging the Giants and Redskins. If they win at the New Jersey Meadowlands next Sunday, they not only make the postseason for the third straight year under resourceful and imaginative coach Doug Pederson, but they rescue some dignity for the division Dallas has thrown away.

``Obviously, yeah, you don’t want it to come down to the month of December,” says Pederson, who led Philly to its first NFL championship since 1960 by beating New England in February 2018′s Super Bowl. ``You’d like to play a little better September, October, November. But I just think the guys — this is the team that when their back is against the wall, they come out swinging and fighting. Whatever it takes. Sometimes it’s not pretty and it doesn’t have to be. Just put some plays together, score more points than our opponents, hold our opponents down, and play great team football.″

Are the Eagles a great team? Probably not. Even completely healthy, they might not match up with the Ravens, who have been the class of the NFL in 2019. Nor with some other top contenders.

Dismissing them, however, would be a dangerous proposition. They’ve proven it the last three weeks.

“We’re excited. That’s one of the first things that I was feeling in there,” quarterback Carson Wentz said after the victory Sunday. ``Obviously everyone’s excited about this win, but hey, we have one more. We have to go win one more. We’ve won nothing yet, but we’re excited for the opportunity. It’s in our own hands to go take it, and we’re excited for it.”

NFL executives must be excited by the makeup of the postseason field, regardless of who gets the last AFC berth.

Get this: 2019 makes a 30th consecutive season with at least 30% of the playoff field new from the previous year. Buffalo, San Francisco, Green Bay and Minnesota all fell short last season. In each of those 30 years, at least four teams managed the feat, and Pittsburgh or Tennessee could make it five.

The most impressive of those climbs is by the 49ers, who were 4-12 in 2018 — without their starting quarterback, Jimmy Garoppolo, for much of that season. In his third year as Niners coach, Kyle Shanahan has seen his team turn into a gutsy group that often is at its best in tight games. Saturday night’s victory over the Rams is emblematic of that, and it’s a wonderful trait to own heading into the postseason.

Only the Packers made a coaching change of the clubs who have made the quick turnaround, and the change in philosophy to working the free agent market to fill holes has been a major factor for the improved defense. The emergence of Aaron Jones as a Pro Bowl running back, and the solid dynamic on offense of Aaron Rodgers in charge of new coach Matt LaFleur’s schemes has the Packers in position for the conference’s top seed heading into Monday night’s showdown at Minnesota.

Buffalo’s rise under Sean McDermott after an ignominious 17-season absence from the playoffs has been built on defense, pluck and, now, the development of Josh Allen at quarterback. While the Bills might not be ready for a charge to the Super Bowl, they figure to be a tough out in January.

The surprise about the Vikings is more that they fell short of the postseason last winter than that they returned this year. Of all the possible division winners, they are the most mercurial, but also one of the most talented.

Of the teams falling short of a repeat turn in the playoffs, the Bears and Chargers top that list of disappointments. Both have taken significant steps backward — at least Chicago has done so but still could have a break-even record, and it plays in a much tougher division than does Los Angeles.

The Chargers play lots of close games. They also lose a lot of close games. Philip Rivers had had a weak season by his high standards and at times looks ready for retirement. The defense makes too many errors of omission and commission. Maybe they’ll have a brighter outlook when they move out of their soccer stadium and into the palace Rams owner Stan Kroenke is building in Inglewood.

The Titans are at Houston, which beat them last week to take charge of the AFC South, and the Steelers have the unenviable task of visiting the Ravens to finish out the schedule. Barring something really weird — and it has been a bizarre season in many ways — one of them will hold off Oakland for the final AFC wild card.

Tennessee and Pittsburgh should take a look at what the Eagles have done and try to emulate it.