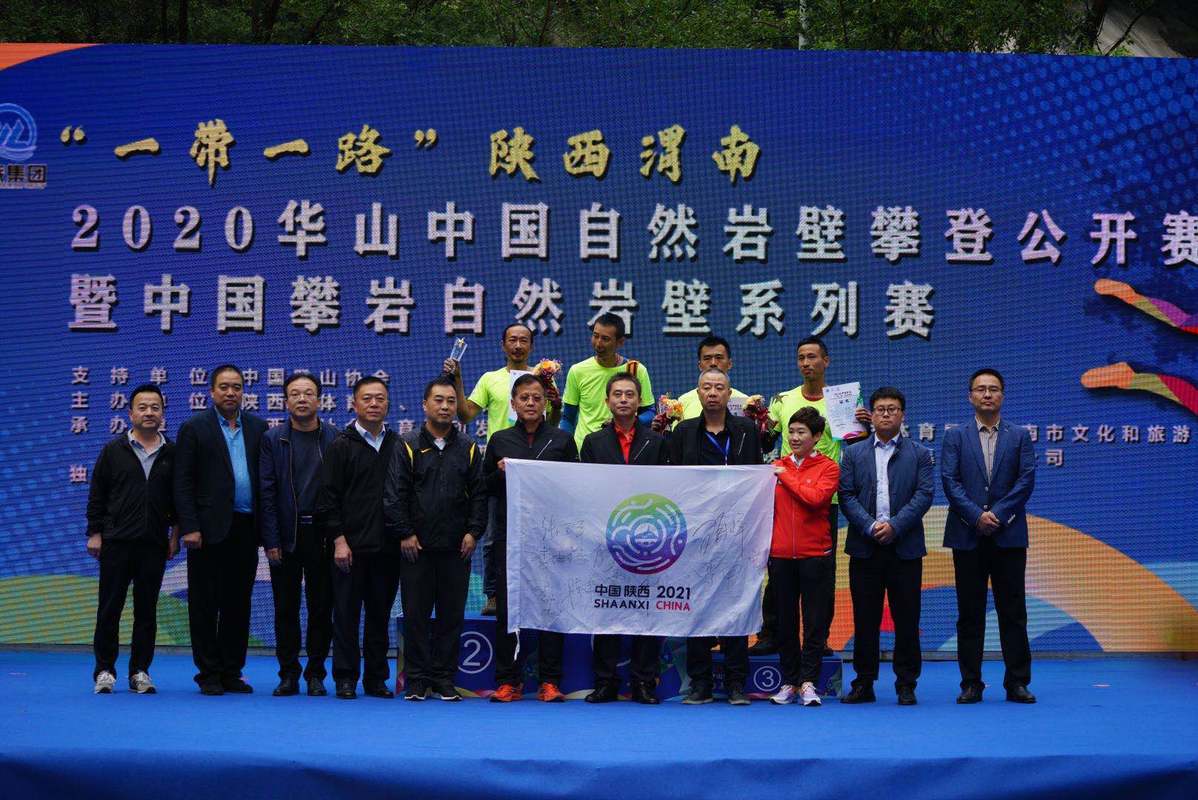 The Chinese Rock Climbing Series is the sport's only national level event that features a natural rock face. The tournament locations are all picturesque mountain areas which are also famous tourist attractions.

"With such an event, the public can become aware that this location is not just a beautiful tourist area but that it can also stage a major rock climbing tournament. The organizers hope the event's renown and influence can continue to grow," said Wang Yongfeng, vice-president of the Chinese Mountaineering Association.

Huashan Mountain boasts a sheer granite peak, with its steep hillsides, sharp ridges and unique scenery making it ideal for a rock climbing event. Huashan Mountain has a giant rock face of over 1,000 meters, which provides athletes with a great location to test their skills, courage and perseverance. 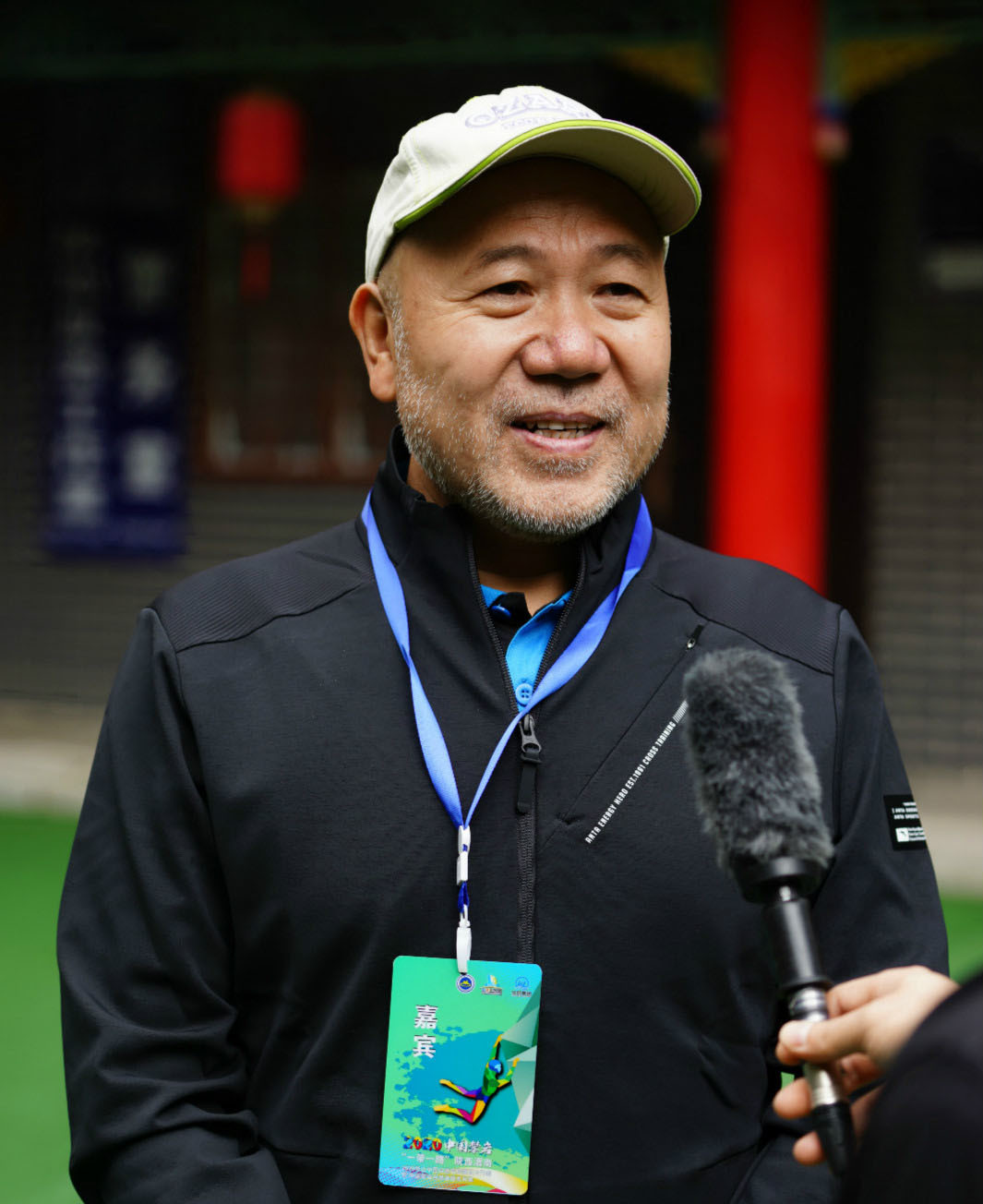 The most special aspect of this event was the natural rock face, and this was the first time in the tournament's history that athletes attempted to conquer it in a team. Experienced quartet Xie Weicheng, Wang Zhiming, Qiu Jiang and Zhao Zhongjum – who were selected by the Chinese Mountaineering Association - were the brave souls who took on the challenge.

Their goal was to reach the top of the Baiyun peak of Huashan Mountain in two days. Compared with traditional rock climbing, athletes need to carry more professional equipment and supplies in order to complete this ascent, which usually takes more than 24 hours. With a vertical route of over 600 meters, the ascent is a stern test of athletes' skills, body strength, endurance and willpower.

"If traditional rock climbing is like a sprint, or some longer ones are like marathons for the athletes, this challenge was like crossing a 'no-go zone' for us," said Zhao, who was in charge of the team's filming and live broadcast during the challenge.

"The difficulty is much higher than short-distance indoor competitions. We faced many uncertainties. If we get injured during the event, we should choose to quit. But, if you are on the rock face, returning to the ground after being injured would also be very tough."

Huashan Mountain is imbued with special meaning for rock climbing enthusiasts in China. Wang explained that conquering Huashan is a dream of many Chinese climbers. The uniqueness of the mountain makes it a great location for the sport, while broadcasting the event from such a scenic area is also a great way to promote the sport to more people. 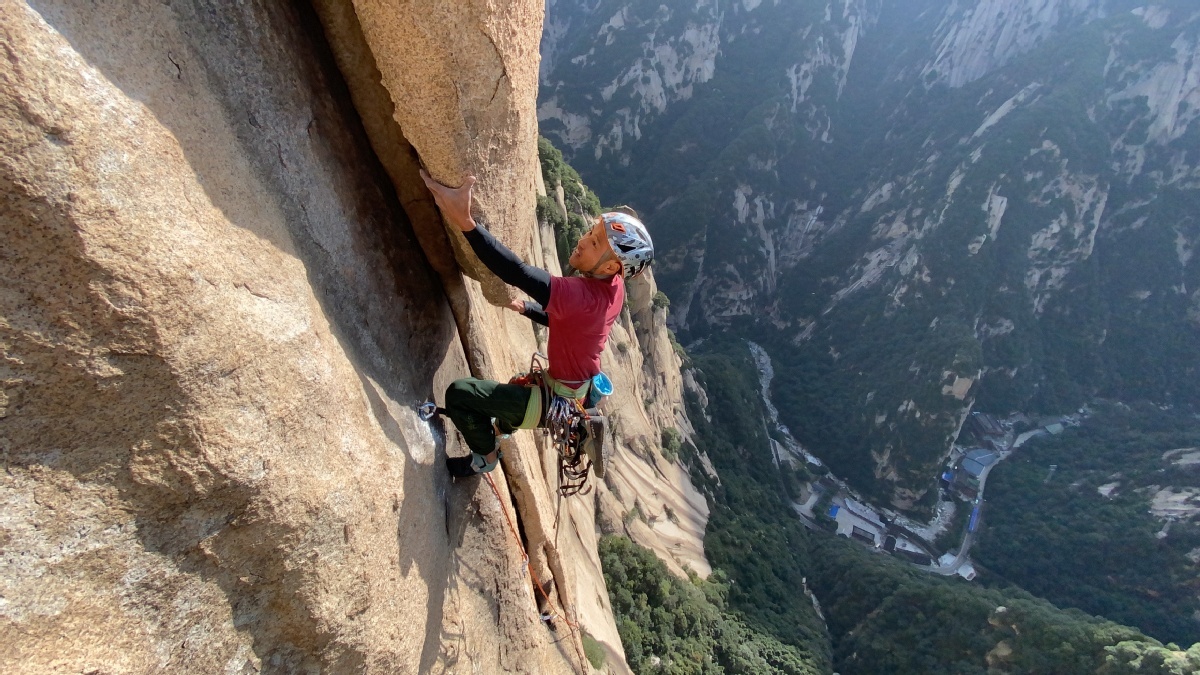 A rocker climber is in the competition during the "Belt and Road" 2020 Huashan Mountain Chinese Rock Climbing Open.

Because the athletes spent a night on the rock face, they needed to take extra food and water. Each athlete required at least three kilograms of water per day – at least 34kg in total for the team.

"This was a big undertaking and everything needed to be planned well. For example, we could not put the most useful things at the bottom of our bags," said Qiu.

They needed to set special tents on the rock face and fasten their bodies to the rock face before sleeping. Zhang said that they used each others' feet as pillows. The four also carried a metal box, which contained a notebook and a pencil in it. After they finished the challenge, they signed their names on the notebook and left the metal box on the mountain peak.

It's common for climbers across the world to leave their names and additional messages on mountaintops. Xie recalled that he once found a metal box at the top of a mountain in his hometown, which contained a QQ code.

Moreover, a more important reason why the four climbers were so determined to complete the challenge was to help ease the public's apprehension about the sport.

They cite the award-winning documentary "Free Solo" as accentuating these fears and failing to convey a positive message about climbing. Instead, they believe, it could leave people with the impression that climbing regularly results in death, thereby harming the sport's image.

"We want more people to know about rock climbing, and know the positivity of the sport," said Zhao. "First of all, this is a safe sport. Second, it's not an unattainable sport for people. It's like all other sports.

"China boasts great conditions for climbing, but the public has an inadequate understanding of the sport. Through such an event, we hope to make rock climbing an everyday sport for more people, especially in places like Huashan Mountain."

The quartet hope they can be good ambassadors for the sport and help newcomers to the sport correctly learn and understand climbing. And they believe changing the public's understanding of the sport will be vital for rock climbing's future development in China.