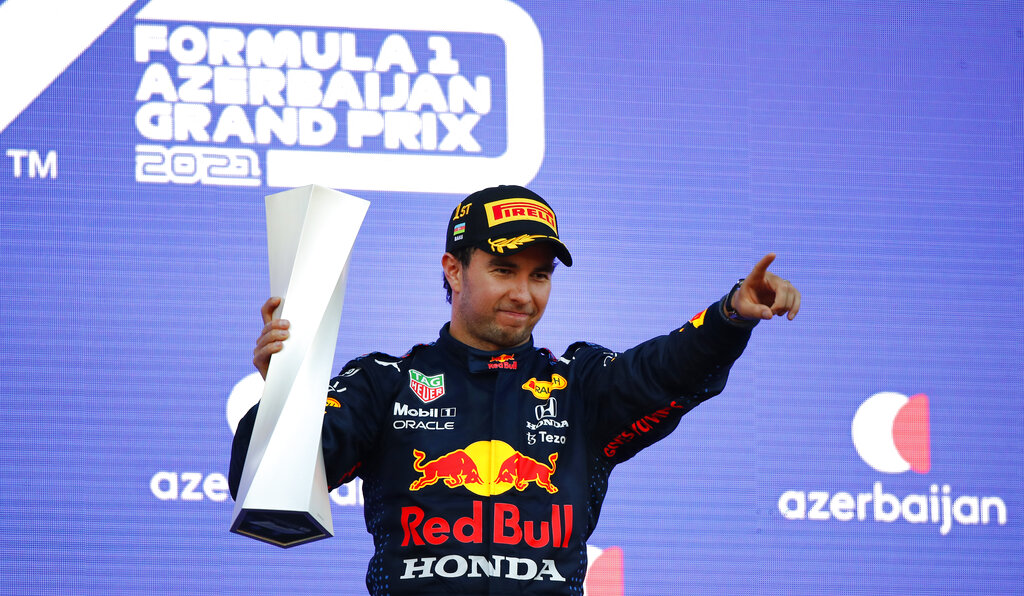 Red Bull driver Sergio Perez of Mexico celebrates on the podium after winning the Formula One Grand Prix at the Baku Formula One city circuit in Baku, Azerbaijan, Sunday, June 6, 2021. (Photo: AP)

BEIJING, June 6 (Xinhua) -- Sergio Perez won his first race for Red Bull in an extraordinary Formula One Azerbaijan Grand Prix on Sunday after teammate and long-time race leader Max Verstappen crashed after a tire failure and Mercedes' Lewis Hamilton finished out of the points after botching a late restart.

Having taken the lead from Hamilton after the first round of pitstops on lap 14, Verstappen had been set for a comfortable win until his left-rear tire blew spectacularly on the start-finish straight on lap 47 of 51.

The debris from Verstappen's crash caused the race to be red-flagged on lap 49 while the track was cleared, paving the way for a standing restart and a two-lap dash to the finish.

At the restart, Hamilton seemed to edge ahead of Perez, but the Briton crucially misjudged his braking point and missed the first corner entirely, dropping him to the back of the field and out of contention for points.

Following Hamilton's mishap, Perez was able to see out the remaining two laps of the race to take his first win since moving to Red Bull this year - despite being told by his team to park his RB16B just after the finish with an apparent mechanical issue.

"I'm so happy for today. Normally Baku is pretty crazy and it would have been good for the team to get a 1-2 but the win is a fantastic result," said Perez, who is the first driver other than Verstappen to win a race for Red Bull since Daniel Ricciardo took victory at the 2018 Monaco Grand Prix.

"We were lucky to finish the race and it was quite difficult to get to the end. [Hamilton] had very strong pace throughout the race, he pushed me every lap onwards from the pit stop."

"At the restart, I had a poor getaway and Hamilton got alongside me but I made the car as wide as possible and he didn't make the corner."

"This is definitely a strong boost of confidence for myself and the team."

Behind Perez, Vettel overtook several cars with his strategy to run long into the race before pitting, and the German was rewarded with a fine second place for Aston Martin's first-ever podium finish.

"It's a big deal for the team. We had a good start, made some positions, looked after our tires and that was the secret to the pace we had."

"It was a great day overall. I'm over the moon for myself and for the team, it was great. A podium - we really didn't expect that."

AlphaTauri's Pierre Gasly rounded out the podium places with a richly-deserved third place after the Frenchman had looked strong all weekend.

"Incredible, honestly I don't know what to say," said Gasly. "It was such an insane race and an intense last two laps. It feels incredible to get that podium."

"We've got some really good points, done a really good race, and have done a fantastic job."

Behind the top three, Ferrari's Charles Leclerc led the field away from pole position but faded to finish fourth, ahead of McLaren's Lando Norris. Fernando Alonso took sixth in his Alpine, and Gasly's teammate Yuki Tsunoda scored his best ever result with seventh.

Leclerc's teammate Carlos Sainz took eighth ahead of Daniel Ricciardo's McLaren, with Kimi Raikkonen scoring his and Alfa Romeo's first points of the season in tenth.

Verstappen's puncture came after Lance Stroll's Aston Martin had suffered a similar blowout on lap 31, raising questions over the pressures and compounds being used by tire supplier Pirelli.

Other drivers who failed to finish included Alonso's teammate Esteban Ocon, who retired early on with a power unit issue, while Williams' George Russell pulled in to retire in the last couple of laps.

Hamilton's teammate Valtteri Bottas looked out of sorts all weekend long and finished out of the points in a lackluster drive, marking the first time Mercedes has failed to score since the 2018 Austrian Grand Prix.

In the drivers' championship, Verstappen and Hamilton remain first and second with 105 and 101 points respectively, with Perez moving up to third on 69 points.

In the constructors' standings, Red Bull have stretched their lead and now have 174 points, ahead of Mercedes on 148. Ferrari vaulted McLaren to sit third with 94 points.

The seventh round of the 2021 Formula One season is the French Grand Prix at Paul Ricard on June 20th.