A controversial 63rd minute penalty by Cristiano Ronaldo put Portugal on the way to a 3-2 win over Ghana, with all the goals coming in the last half hour. 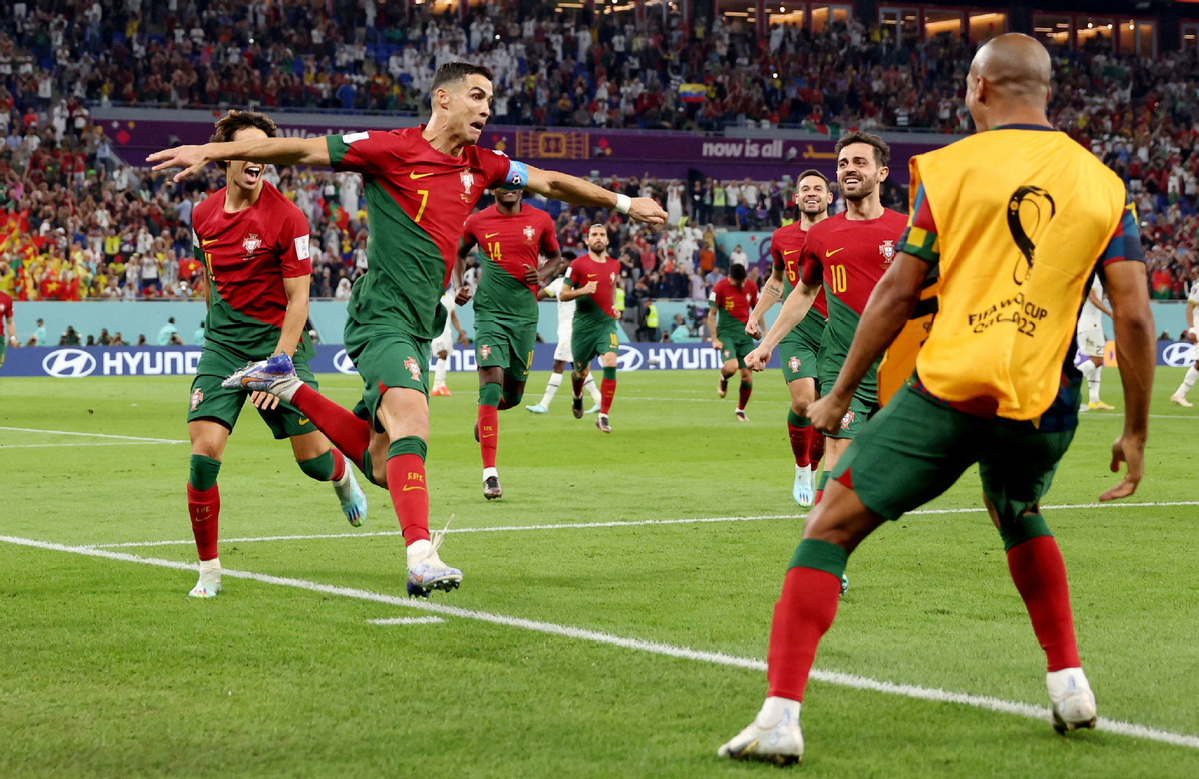 There seemed to be minimal contact between the striker and Ghana defender Mohammed Salisu in the box in the 62nd minute. The striker went straight to ground and the referee pointed to the penalty spot, to the fury of the Ghana team.

Although Ghana drew level through Andrew Ayew 10 minutes later, quick-fire goals from Joao Felix after 78 minutes and Rafael Leao two minutes later assured the win for Portugal before Osman Bukari pulled a goal back for Ghana in the 89th minute to produce a frantic finale.

After the events of recent days, the now club-less Ronaldo was always going to be the center of attention and he was in action in the opening minutes: first after Mohamed Kudos' poor control allowed him through on goal, but his first touch was kept out by Lawrence Ati-Zigi's brave block.

Ronaldo then rose well to meet a cross to the left, but with the goal seemingly gaping, he sent his header well wide.

He had the ball in the net in the 31st minute, but the referee had already blown for a push on Alidu Seidu.

Moments earlier, Felix wasted another good chance when he sent a left-foot shot well over when unmarked close to the penalty spot.

Meanwhile, Ghana were dropping deeper and deeper, leaving striker Inaki Williams to fight a lone battle in attack. An isolated moment of magic came from Kudos, who picked up a booking in the 45th minute for a high foot.

Otavio clipped the ball over the Ghana bar in the closing moments of the first half, but for all of their pressure and possession and over 350 passes completed, Ronaldo's early effort was the only time Ghana keeper Ati-Zigi had been forced into action in the first 45 minutes.

Ronaldo had another chance in the 54th minute after Thomas Partey carelessly lost the ball, but despite receiving in space, he took too long cutting inside and his effort was blocked, while at the end, Kudos went close after a powerful run through the middle.

The game sprang to live with Joan Felix and Seidu went head-to-head in the middle of the park after Seidu's challenge on the forward, with both players maybe lucky not to be given further punishment.

Ronaldo's controversial penalty put Portugal ahead, but 10 minutes later, Ghana was level, with Kudos again showing his ability near the goal-line to set up Andrew Ayew's goal from close range.

Ghana's joy didn't last long as a bad error from left back Baba Rahman saw him fail to cut out a through ball and Joao Tomas had an easy finish one-on-one with Ati-Zigi.

A quick break two minutes later saw Leao, who had just come on, receive a pass from Bruno Fernandes to slide the ball across Ati-Zigi into the far corner of the net.

Williams then crossed for Bukari to give Ghana hope in the 89th minute and Williams almost poached an equalizer when he robbed Portugal keeper Diogo Costa in the closing seconds, only to slip when he looked certain to level the score.