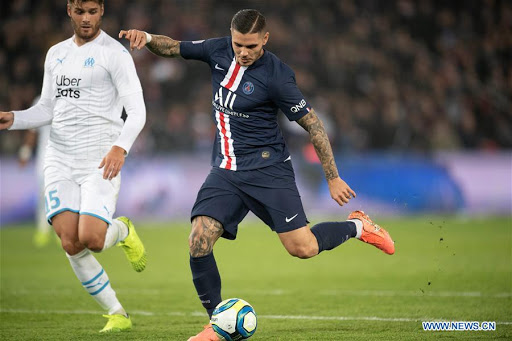 Mauro Icardi (R) of Paris Saint-Germain competes during the Ligue 1 match against Olympique of Marseille at the Parc des Princes in Paris, France on Oct. 27, 2019. (Photos: Xinhua)

The Argentine forward, who arrived at the Parc des Princes on loan in the summer of 2019, penned a four-year contract which will keep him at the capital-based club until 2024.

"Paris Saint-Germain are pleased to announce the exercise of Mauro Icardi's purchase option. The 27-year-old striker was loaned in 2019-2020 by Inter Milan," an official statement from PSG said.

The Rosario-born Icardi has contributed 20 goals and four assists in 31 appearances in the 2019-2020 season at PSG, which established himself as the second most productive player, behind only French striker Kylian Mbappe.

The current Ligue 1 season was abandoned on April 30, following the French government's decision to call off all professional sports events until September at the earliest, and PSG was awarded the league title for the third consecutive year.