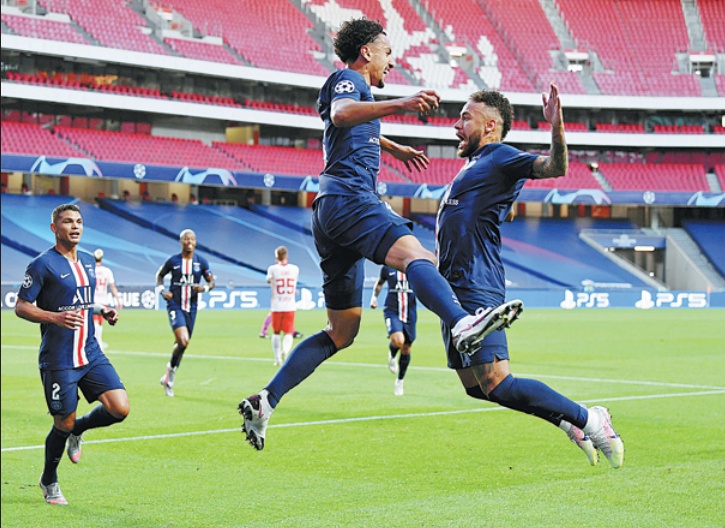 The wait is finally over for Paris Saint-Germain.

After 110 Champions League matches, the Qatar-owned French powerhouse has made it to the final of Europe's top club competition.

No other club to reach the final had to wait longer, with Arsenal holding the previous record by going 90 matches from 1971-2006 before being able to play for the title.

And there was no need for late drama for PSG this time as Angel Di Maria scored a goal and set up two others in a comfortable 3-0 win over Leipzig in the semifinals on Tuesday. PSG had needed two late goals to come back against Atalanta in the quarterfinals last week.

"We're very happy. It's a first for the club," Di María said. "We worked hard and played a great game. We want to make history for the club. We succeeded tonight and we're in the final, that's very important. We have to continue like tonight to make our dream come true."

PSG became the first French club to reach the Champions League final since Monaco in 2004, and it can become the second French team to win the title after Marseille in 1993.

Marquinhos and Juan Bernat also scored as PSG moved a win away from finally capturing an elusive European crown.

Neymar, who set up one of the goals with a neat backheel flick, is also a step closer to fulfilling his goal of winning the Champions League away from former club Barcelona.

The Brazilian and his teammates celebrated on the pitch after the match, chanting and dancing. Back in Paris, PSG supporters poured onto the Champs-Elysees, lighting up the iconic avenue with flares in raucous scenes before police eventually intervened.

The result ended a surprising run for Leipzig, the young German club that was making only its second Champions League appearance. The last time PSG reached the Champions League semifinals was in 1995, 14 years before RB Leipzig even came into existence.

"The ticket for the final for Paris is well deserved," said 33-year-old Leipzig coach Julian Nagelsmann. "In the first 10 to 12 minutes we did well and had good situations. It was hard to come back into the game after the second goal because Paris have a lot of quality. It's hard to accept but football is like this."

PSG looked in control from the start at Benfica's Stadium of Light, with Marquinhos and Di Maria scoring in the first half and Bernat adding to the lead in the second.

Leipzig, which eliminated Atletico Madrid in the quarterfinals, was trying to make its mark in Europe under energy drink company Red Bull, which in 2009 bought the license rights from fifth-tier club SSV Markranstaedt and financed the new team's steady promotion through the lower leagues in Germany.

PSG has scored in its last 34 Champions League games, matching the record set by Real Madrid from 2011-2014.