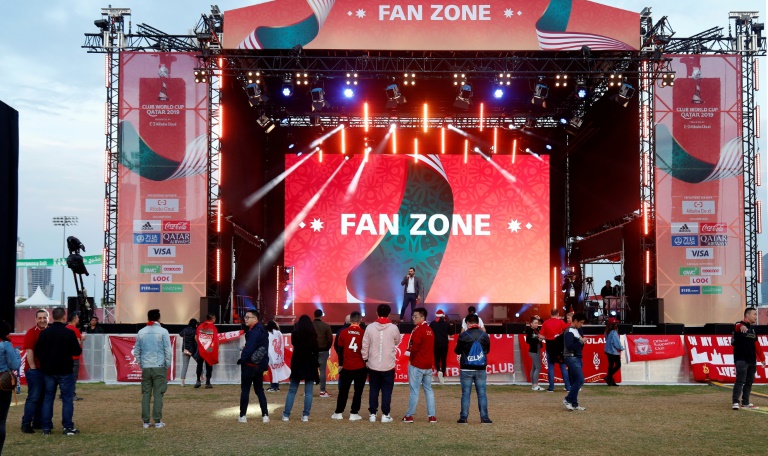 "We've got the cheapest beer in Qatar," boasts a seller of vouchers for $6.90 pints at the Club World Cup fan zone in Doha.

Several bars in Doha charge in excess of $16 (14.39 euros) for a bottle of beer and the Qatari World Cup organisers have said they are "looking into" how to bring prices down ahead of 2022.

The fan zone's bars, located behind Doha's golf club about 12 kilometres (seven miles) north of the Khalifa stadium hosting the rump of the tournament, did a brisk trade in Heineken and Stella Artois.

"It's first class. I've been to loads of fan zones, including Madrid in June," said Scottish car salesman Craig Brown, 48, as he enjoyed several beers with his son ahead of Liverpool's semi-final clash with Mexico's Monterrey Wednesday.

Alcohol pricing and availability have been a recurring concern since the conservative Muslim emirate was named host of the 2022 tournament in 2010.

The Secretary General of the Supreme Committee for Delivery and Legacy Hassan al-Thawadi said last week that "alcohol is not part of our culture, but hospitality is".

"There will be places and there are places that serve alcohol and people can enjoy a pint."

Brown, who had a Liverpool FC tattoo on his calf muscle, said he had "no complaints".

"It's friendlier than Dubai. It's better than the fan zone outside the Stade de France at the opening game of the 1998 World Cup," he added of Scotland's 2-1 defeat at the hands of Brazil.

"Tell me ma we're in Qatar," read one red banner as two Englishmen wearing shorts and socks fought heavy wind to strap it to the fan zone stage.

A cover act played "Sunny Afternoon" by the Kinks as the sun broke through heavy cloud ahead of Liverpool's kick-off against Monterrey.

"Sitting here, sipping at my ice cold beer," sang the crowd at the free event.

"Beer is super expensive," said Liverpool fan Yuan Fei who, like about one-fifth of those in the fan zone, had travelled from China to cheer the Reds.

"I'm not happy, but for a match you have to," added the financier from Chengdu as he and three friends lined up seven pints, adding that one would cost just $2 back home.

"It's not like they need it," said one fan of gas-rich Qatar's famously high "sin taxes" levied on alcohol.

'We love you Liverpool'

A paramedic told AFP no visitors had yet required treatment for alcohol poisoning, though several needed medical attention after falling following too much to drink "later at night".

There were also reports of a handful of fans breaking plastic chairs in a bank of tiered seating earlier in the tournament.

"It's a great place to gather people together before the game. I think it's probably a little bit expensive, but I think it's great Qatar have gone out of their way to make the facility available," said Suzanne Dixon, 57, a British expat based in Doha with family in Liverpool.

She then lowered an inflatable plastic zorb over her top half and joined a game of "balloon ball" with other visiting football fans.

A remote-controlled police surveillance robot patrolled the fan zone's airport-style checkpoint to the amusement of fans.

But the security and police presence was low-key and a festival atmosphere took hold as the crowd grew.

The fan zone, capable of holding 5,000 supporters, got steadily busier as match time approached but relatively cold conditions and rain may have deterred some.

Officials estimate that some 5,000 Liverpool fans travelled to Doha for the Club World Cup.

"We love you Liverpool, we do!" sang one of Merseyside's favourite sons, artist Jamie Webster, as fans began to file out for buses bound for the stadium.