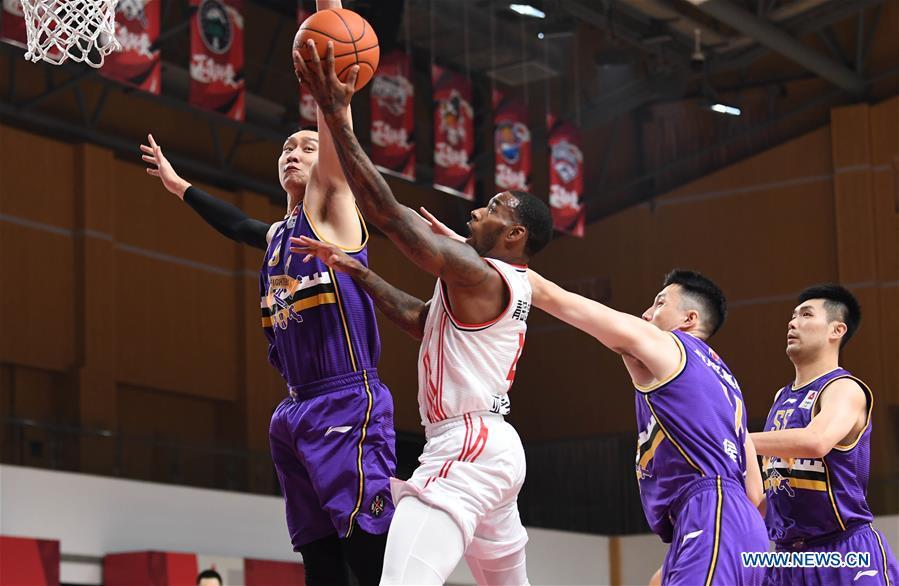 Darius Adams (2nd L) of Qingdao Eagles goes up for a basket during the 4th round match between Qingdao Eagles and Beijing Royal Fighters at the 2020-2021 season of the Chinese Basketball Association (CBA) league in Zhuji, east China's Zhejiang Province, Oct. 26, 2020.(Photo: Xinhua)

The Qingdao Eagles crushed the Beijing Royal Fighters 127-95, while the Xinjiang Flying Tigers eased past the Nanjing Monkey Kings 116-94 in the 2020-21 Chinese Basketball Association (CBA) on Monday.

Beijing suffered a heavy loss due to the injury of three key players, Yu Changdong, Sun Yue and Wang Shaojie.

The lead seesawed in the first quarter and Qingdao managed to have a three-point lead before the period ended. The Eagles expanded the advantage to double-digits in the following quarter, as Adams and captain Zhang Chengyu combined for 23 points in the first half.

Qingdao enlarged the gap to as many as 20 points in the second half, extending their winning streak to four games.

"Our opponents played aggressively and played really fast. And it was my job to get these guys to play better. They're not playing as hard as I would like to be, but we'll get there," said Beijing head coach Stephon Marbury.

Elsewhere in the match between Xinjiang and Nanjing, as Zhou Qi was limited by foul trouble, Tang Caiyu scored first five points as Xinjiang raced to a 15-6 lead.

With a 30-16 lead into the second, Xinjiang then interspersed precision with transition opportunities to enlarge the advantage to 20, capped by outside shooter Liu Lipeng's 3-pointer.

Nanjing trimmed it to 72-63 midway through the third on a 12-1 run, but Liang Yingqi hit a three-point play and pocketed Lutpulla for another down the stretch.

Nanjing clawed back and cut the deficit to seven again in the final period. However, unstoppable Zhou responded with 13 points in a row from inside while Xinjiang pushed for the win.

"They matched up physically with us and it's hard to play, we did well most of the time but had a poor performance in the third," said Xinjiang coach Adiljan.

According to the follow-up schedule, the Sichuan Blue Whales are to play the Guangdong Southern Tigers, while the Fujian Sturgeons will meet the Shanghai Sharks on Tuesday.