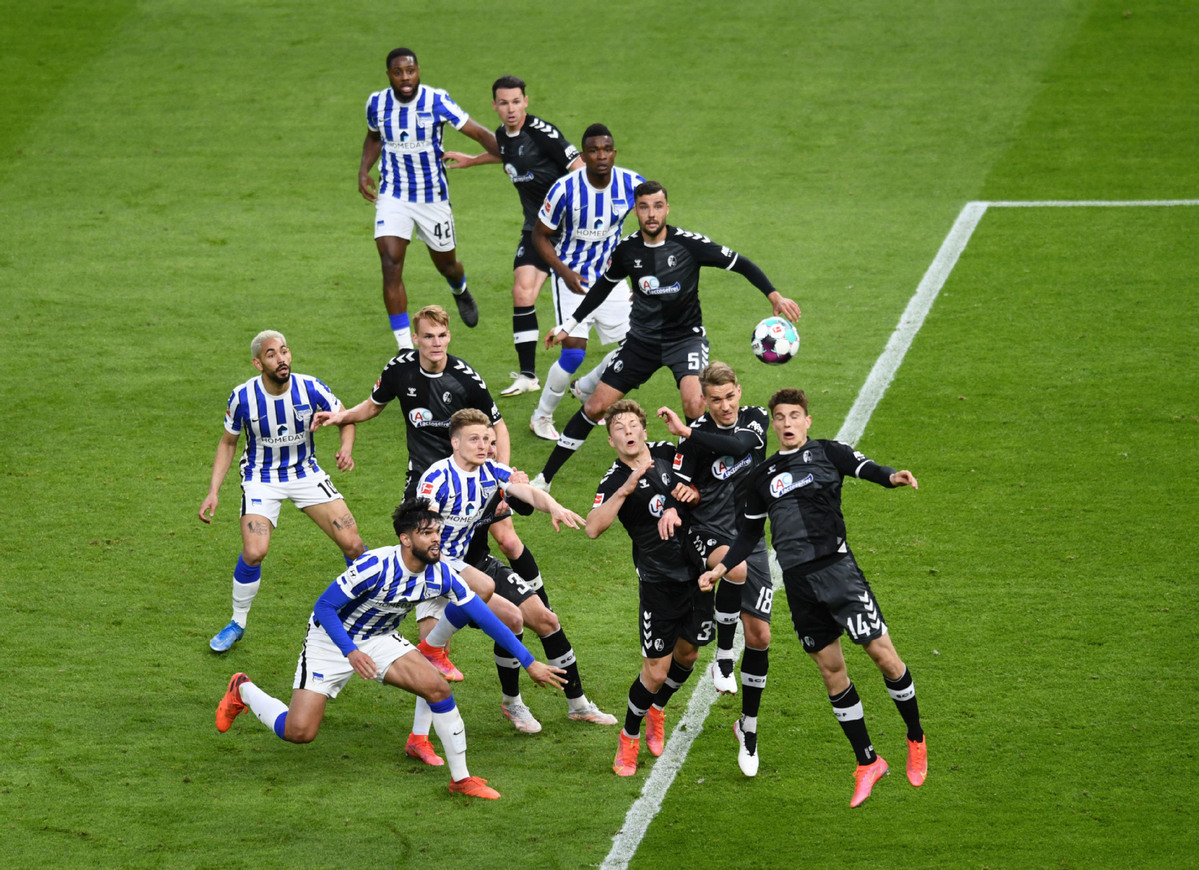 SC Freiburg's Nils Petersen and Guus Til in action in Berlin, Germany, on May 6, 2021. [Photo/Agencies]

Hertha Berlin reaped crucial points in the relegation battle after cruising 3-0 past Freiburg courtesy of goals from Krzysztof Piatek, Peter Pekarik, and Nemanja Radonjic in the rearranged fixture of the 30th round in Bundesliga on Thursday.

The visitors from Freiburg took the reins from the starting whistle but for all that Lucas Holer failed to overcome Berlin goalkeeper Alexander Schwolow following a one-on-one in the 7th minute.

Hertha suddenly sparked to life and shocked Freiburg with the opener six minutes later after Mainz custodian Florian Muller blocked Jordan Torunarigha's long-range effort into the path of Piatek, who made no mistake and broke the deadlock from a tight angle.

Freiburg was shocked while the hosts gained momentum and made it two in the 22nd minute when Radonjic's cross into the box allowed Pekarik to head home from very close range.

The visitors took a two-goal deficit into half-time but Christian Streich's men started powerfully into the second half as Nicolas Hofler and Holer created half-chances in the early stages.

However, as the match progressed, the Old Lady took over and posed a threat on fast breaks as substitute Matheus Cunha rattled first the side netting in the 70th minute before he hit the post from 18 meters four minutes later.

Freiburg responded but lacked in accuracy as Nils Petersen wasted a promising chance after pulling over the target from close range minutes later.

The visitor's resilience was broken in the 85th minute when Radonjic danced through Freiburg's defense before finishing off the job with a well-placed shot past Muller.

With the result, Hertha Berlin climbs out of the bottom three and into the 14th position meanwhile Freiburg stays in 9th place for now.

"I am satisfied with the team's performance and the result. I think it is a deserved win. We played very well, especially in the first half, very disciplined and compact. I am really happy with the three points," said Hertha head coach Pal Dardai.

On Wednesday, Hertha clashes with bottom side Schalke in the last rearranged fixture.