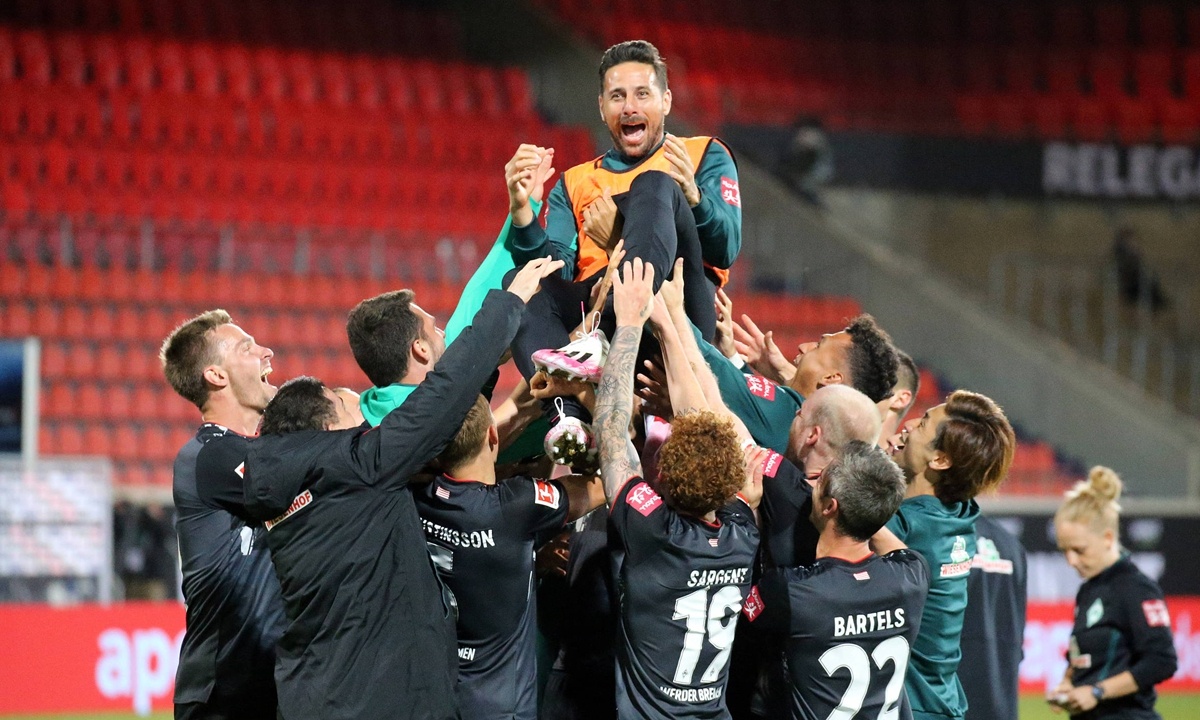 Relieved Werder Bremen sealed their Bundesliga survival for next season on away goals after a dramatic 2-2 draw at second-division Heidenheim in Monday's nerve-­racking relegation/promotion playoff, second leg with the crucial second goal scored in added time.

"I'm just happy and glad that we made it after all that," said Bremen coach Florian Kohfeldt as the playoff finished in a 2-2 draw on aggregate.

"We were dead so many times this year, we always came back," he added after Bremen had only qualified for the relegation playoff on the last day of the season.

Bremen, who won the last of their four German league ­titles in 2003-04, preserve their record of the most seasons spent in the Bundesliga by any club while Heidenheim ­remain in the second tier.

"We had a great chance, we are mega disappointed," said Heidenheim coach Frank Schmidt, whose side blew their chance of playing in the Bundesliga after a goalless draw at Bremen in Thursday's first leg.

After Heidenheim conceded an own goal within just three minutes, their striker Tim Kleindienst equalized on 85 minutes to keep the hosts' hopes alive.

However, Bremen's survival was confirmed four minutes into added time.

Replacement forward Fin Bartels beat the defense and set up Swedish defender Ludwig Augustinsson to fire home his first goal of the season and his team's crucial second.

In the dying stages, Bremen defender Theodor Gebre Selassie then conceded a penalty when he fouled Heidenheim midfielder Tobias Mohr in the box.

Kleindienst fired home the resulting penalty in the eighth minute of added time, but it was too late.

Bremen made a flying start when Heidenheim center back Norman Theuerkauf gifted his former club an own goal after just three minutes.

With 10 minutes gone, a long-range shot by Bremen forward Milot Rashica had to be tipped over the crossbar by the Heidenheim goalkeeper.

It was 1-0 at the break, but Heidenheim flew out of the blocks in the second half and had Bremen under pressure before forcing the equalizer.

With clock ticking down, Heidenheim drew level on 85 minutes when midfielder Tobias Mohr clattered the crossbar and Kleindienst tapped home the rebound before both teams scored in the dramatic closing stages.

Fans are not allowed in German grounds since the league restarted in mid-May after a two-month hiatus due to the coronavirus pandemic.

However, there were curious scenes midway through the second half when a group of young people appeared briefly in the main stand before quickly being ushered away.