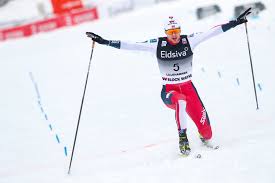 Riiber's teammate Jens Luras Oftebro returned to the podium on position two and Franz-Josef Rehrl claimed the first individual podium of the season for team Austria as the third.

Oftebro won the ski jump competition with a beautiful, clean jump to 137.5 meters. Riiber won the second ranking in the ski jump by collecting 146.4 points. Oftebro wrestled the jumping win over Riiber with a total 148.4 points. Two points less for Riiber meant a delay of eight seconds at the start line of cross country race.

The most impressive cross country skier was Franz-Josef Rehrl from Austria. As the third best in jumping, he tried to close the gap to the two leaders. Finally, Riiber showed his muscles and left the other two behind to claim an undisputed eighth season victory.

Oftebro and Rehrl kept fighting but on the final stretch, Rehrl had to concede to the fact that he had used a lot of power in the first two laps of the race. Oftebro returned to the podium after his early season successes in Ruka to claim a career-best second place. Rehrl took his first World Cup podium this season.

Behind the leading athletes, Joergen Graabak from Norway stormed to the fourth position and collected valuable points for the overall second position in the World Cup standings.