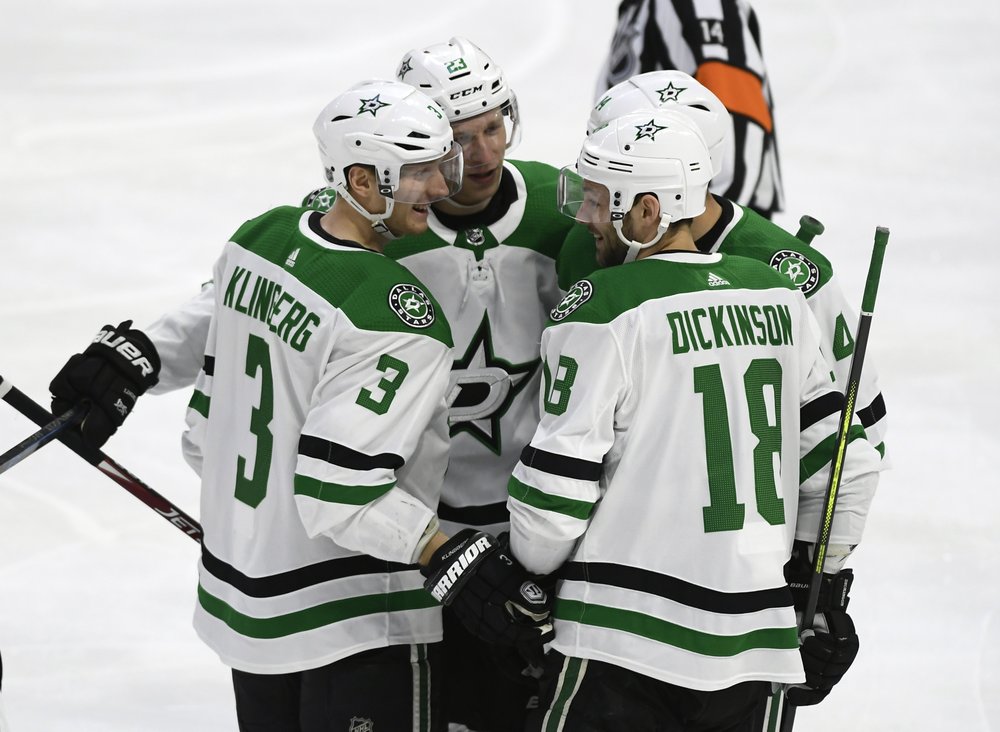 Jason Dickinson encountered quite a few bumps in the road on his route to the NHL. Good thing for his trusty truck.

Dickinson was up and down between the Dallas Stars and their American Hockey League affiliate, the Texas Stars, a total of 17 times during the 2017-18 season.

Sometimes, the forward would join the team from the road. And sometimes, he would make that 183.5-mile trek along the interstate in his truck.

That’s a rather easy call-up commute by league standards: From rink to rink, the average distance between NHL teams and their AHL partners is roughly 460 miles (740.3 kilometers).

Currently, there are a half-dozen NHL teams that have affiliates located more than 1,200 miles (1,931.2 kilometers) away.

The longest jaunt? From the Utica Comets in New York to the Vancouver Canucks, which is a 2,918-mile (4,696 kilometers) coast-to-coast expedition.

The shortest? A tie between the San Jose Sharks/San Jose Barracudas and the Winnipeg Jets/Manitoba Moose. That’s simply a short walk down the hallway thanks to shared arenas.

Over the past few seasons, a few teams have moved their minor league affiliates closer to base camp. The Colorado Avalanche relocated their farm team from San Antonio, Texas, to Loveland, Colorado, in 2018 and Ottawa a year earlier moved its from Binghamton, New York, to Belleville, Ontario.

The Vegas Golden Knights recently announced their purchase of an AHL franchise from Spurs Sports & Entertainment, operators of the San Antonio Rampage. The plan is to relocate the team from Texas to Henderson, Nevada, and begin play at the Orleans Arena next season.

It makes sense having players nearby for practical (emergency call-up) and logistical (easier for executives to catch games) purposes.

Avalanche assistant general manager Craig Billington lives in Denver but spends about 80% of his time working with the Eagles in Loveland, which is about 50 miles (80.5 kilometers) away.

“When you take into account the viewing and the communication that goes on, it really benefits from a geographical proximity,” Billington explained. “Information travels quite quickly and enables us to feel connected — the coaching staff, all the players, the trainers, the benefit of doctors and the medical support.”

Eagles forward Jayson Megna is no stranger to making various NHL/AHL treks. He has taken that long flight from Utica to Vancouver while with the Canucks. He’s gone from Wilkes-Barre/Scranton Penguins to the Pittsburgh Penguins (264 miles, 424.9 kilometers). He knows the trip from the Hartford Wolf Pack to the New York Rangers (115 miles, 185 kilometers).

The current commute, from Loveland to Denver, is more than manageable for a player who’s been added, recalled or returned on loan five times this season. Theoretically, he could be back at home in Fort Collins that night after a game.

“Super easy,” said the 30-year-old Megna, who has played in 121 NHL games. “There’s not any issues with travel plans. You still feel good and prepared for a game.”

Not that players mind the travel — any sort of travel.

“I mean, when you get called up to the NHL you have a certain amount of adrenaline,” Megna said. “Guys just make it happen.”

Take goaltender Calvin Pickard, for instance: He played in weekend games for the Grand Rapids Griffins last month, before getting a quick call to join the Detroit Red Wings to make a start.

Speaking of gear, that can be quite an ordeal for players who must take a flight to join their teams.

That’s why Dickinson preferred to make the drive from Cedar Park, Texas, to Dallas in his truck.

As an added bonus to driving, he had his own transportation while in town.

“It sucks when you’re stuck in your city and you have to beg guys to pick you up at the hotel,” said Dickinson, who has eight goals and 10 assists in 55 games for Dallas this season. “It makes it easy to feel a part of the area. You don’t feel like you’re coming into a whole new city and trying to figure things out.”

GAME OF THE WEEK

Alex Ovechkin continues his quest to reach the 700-goal mark on Thursday when the Washington Capitals host Montreal. Ovechkin has been held without a goal over his last five games. He remains on 698 goals as he tries to become the eighth NHL player to score 700 goals.