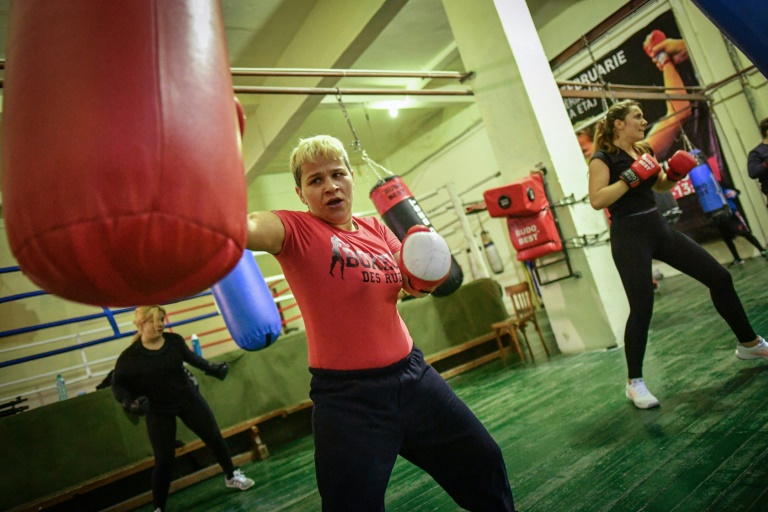 Steluta Duta says becoming a boxer 'was my only chance, my gamble' during a break from her training at the gym in Buzau.(Photo: AFP)

Steluta Duta was a teenaged orphan living on the streets when, one cold January day in 2002, she stepped through the door of a boxing gym in the town of Buzau and embarked on her unlikely path to becoming an elite athlete.

Duta, whose first name means "little star", has fought for almost two decades in the ring, with every punch thrown bringing her closer to what she calls "a normal life, away from misery" and becoming an inspiration for others like her.

Romania is one of the poorest in the European Union, with 38 percent of children at risk of social exclusion and poverty, according to Eurostat.

Becoming a boxer "was my only chance, my gamble", Duta, a short woman with cropped hair dyed blond, tells AFP during a break from her training at the gym in Buzau, a town in southeastern Romania.

"If it wasn't for that day she entered the gym, she would now be another one of those living under a bridge and sniffing glue," says a tearful Constantin Voicilas, 69, who has been Duta's coach and mentor throughout her career and has been training promising boxers for more than four decades.

When Duta left her orphanage aged 17, she initially became homeless and even thought about suicide.

"Back then I lied to (Voicilas) and said I had a place to sleep so he would let me box," Duta recalls.

When Voicilas learned the truth he converted part of the gym into a bedroom to make sure she had somewhere to sleep.

Sport as a lifeline

A Save the Children report released in late 2019 cited a host of threats to child welfare, particularly in rural areas: high education dropout rates, limited access to healthcare and a prevalence of physical and emotional abuse as a form of discipline.

Duta is now helping the next generation to fight those obstacles in the ring.

At the Buzau boxing gym, she often spars with Bianca Lacatusu, a shy teenager 20 years her junior.

Lacatusu also had a tough childhood.

Her parents died when she was seven months old, when she was placed with a foster family who later handed her over to an orphanage.

"I like to fight... I don't know how the Master found me, but I'm glad he did," Bianca tells AFP, using Voicilas's nickname.

Lacatusu says that Duta has been an inspiration to her -- and that she dreams of one day defeating her in the ring.

Adrian Lacatus, the national boxing team coach who has worked closely with Duta, says that girls from tough backgrounds often display this will to succeed.

"Children from poor families are used to difficulties, they don't throw in the towel at the first hurdle," he says.

He says with confidence that among the girls he is currently coaching in Bucharest, "many will write history".

One of them is already well on her way.

But at 17 she has already won a silver medal at the European Championships and is now training with Lacatus for future competitions.

For her part, Duta is preparing for two national competitions later this year and is determined to fight on for two more years until the age of 40.

After that, she wants to focus on coaching and her personal life.

"I want to be healthy and to have a family. To be a good mother, first of all," she says.

"Without parental love, it's all in vain."

Amateur boxing is not lucrative, so Duta's finances have not matched her success in the ring.

The champion still pays rent for a two-room apartment in Buzau that she hopes to buy someday.

When asked if she feels that the Romanian state supports her, Duta points towards her coach, joking: "You're my state!"

"Yes, the Republic of Voicilas", he replies.

But Duta has used her meagre savings to renovate the house where her biological mother lives with two of her younger siblings -- despite the fact she gave Duta up right after she was born.

"I hold no grudge," Duta says.