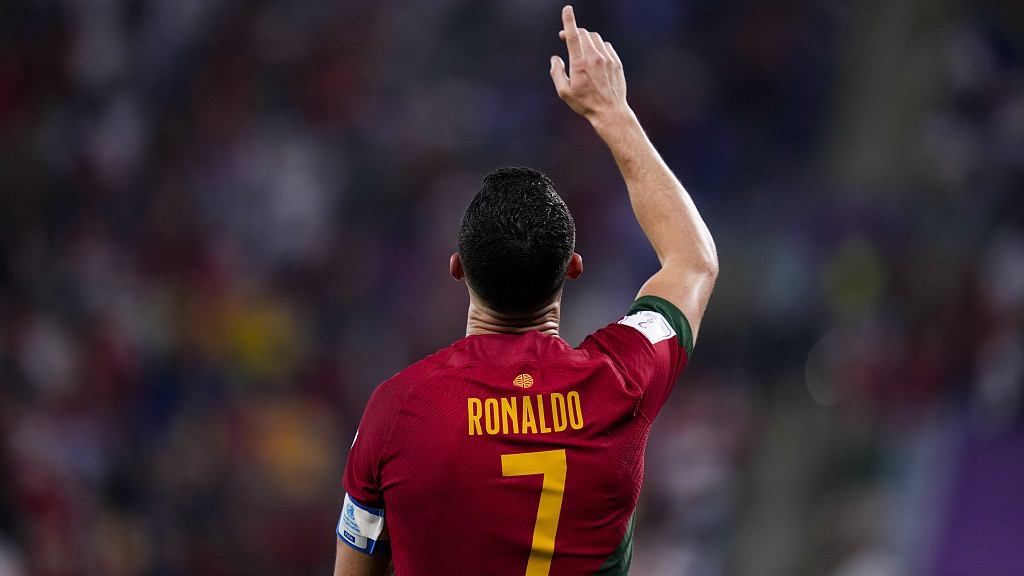 Portugal's Cristiano Ronaldo reacts after scoring from the penalty spot during their World Cup group clash with Ghana at the Stadium 974 in Doha, Qatar, November 24, 2022. (Photo: CFP)

Whether you recoil from Cristiano Ronaldo's histrionics and oversized ego, or stand in awe of his maniacal drive that makes him one of the finest footballers in the game's history, you just can not take your eyes off him.

To some cynics, the five-time Ballon d'Or winner, who has freshly ended his acrimonious relationship with Manchester United, would do whatever he could to impress potential suitors and rebuild a damaged reputation. To others, he is a national hero and only cares about lifting the one trophy that has eluded him and Portugal so far — the World Cup.

As Fernando Santos' side kicked off their Qatar campaign against Ghana on Thursday, there was only one player many of the 42,600 boisterous fans in the Stadium 974 came to see, and the indisputable protagonist, albeit in his dwindling state, duly delivered. 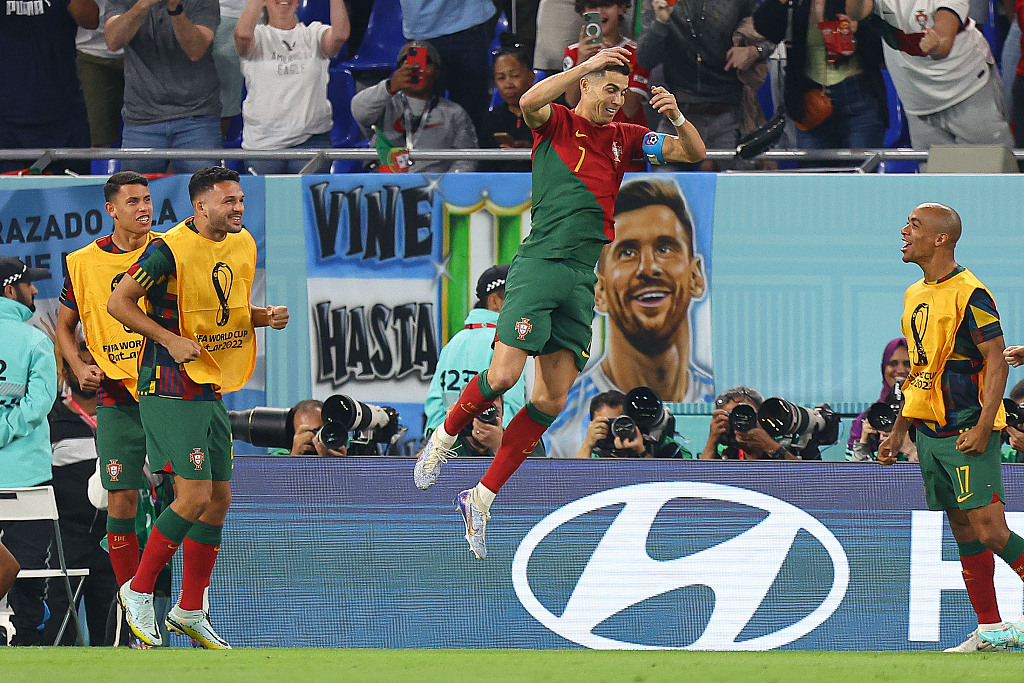 Cristiano Ronaldo of Portugal celebrates his historic goal during their World Cup group clash with Ghana at the Stadium 974 in Doha, Qatar, November 24, 2022. (Photo: CFP)

Ronaldo's big moment came when he fell in the box after feeling minimal contact from Mohammed Salisu. Video replays suggested the Ghana defender may have got a touch on the ball, but the referee Ismail Elfath deemed it a foul.

The veteran talisman, who was on the verge of tears during Portugal's national anthem, drilled home the resulting penalty and wrote his name in the record books to become the first ever male footballer to score in five different World Cups.

Portugal went on to win 3-2 as goals from Joao Felix and Rafael Leao helped the Euro 2016 champions hold out against two late efforts from Ghana. The hard-earned triumph will be a welcome distraction from the off-field soap opera that has dogged Ronaldo and his team's build-up to the tournament. 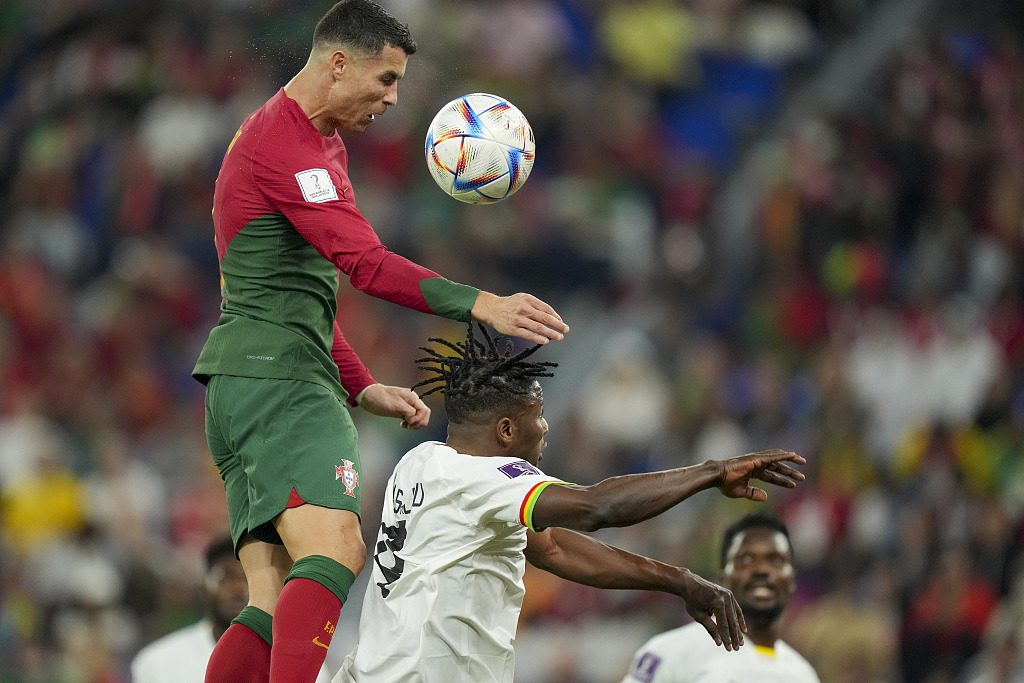 Cristiano Ronaldo of Portugal leapd hight to head the ball during their World Cup group clash with Ghana at the Stadium 974 in Doha, Qatar, November 24, 2022. (Photo: CFP)

"Cristiano is special because he's one of the best of all time, playing in his fifth World Cup, and he's still able to help us a lot," beamed Ronaldo's teammate Bernardo Silva. "He proved it again today and we are very happy we can still count on him. Not just the goal but he worked a lot for the team."

Santos also lavished his captain with praise after the game. "Cristiano Ronaldo is a phenomenon, a legend like many who have come and gone before," he told a press conference. "In 50 years' time, we will continue to speak about him."

Ghana coach Otto Addo, however, was less impressed. "If somebody scores a goal, congratulations. But this was really a gift. A special gift from the referee," fumed Addo in reference to Ronaldo's penalty. "I don't know whether VAR [video assistant referee] was paying attention... If you look at the replay, we played the ball. It was actually a foul against us." 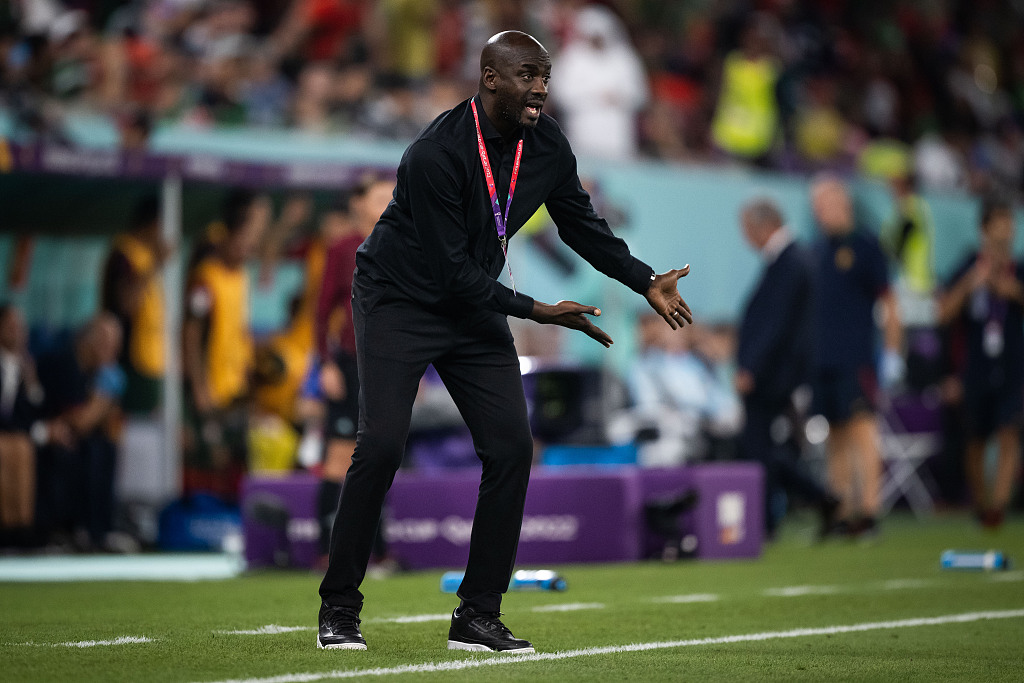 "The referee gave a penalty which was not a penalty, and everyone saw that. Why? I tried and asked some people from FIFA if I could speak to the referee in a calm and quiet way. They said he was in a meeting and not possible."

When asked whether the penalty would have been given for another player other than Ronaldo, Addo said, "You have to ask the referee. I have no proof of that a different decision would have been made for someone else..."

Out on the pitch, Ronaldo's name was chanted by the fans, who were delirious with joy after witnessing another piece of history in a blaze of glory and ageless magic. This will likely be Ronaldo's final show on the world stage. Yet time passes and his superpowers have not began to wane. 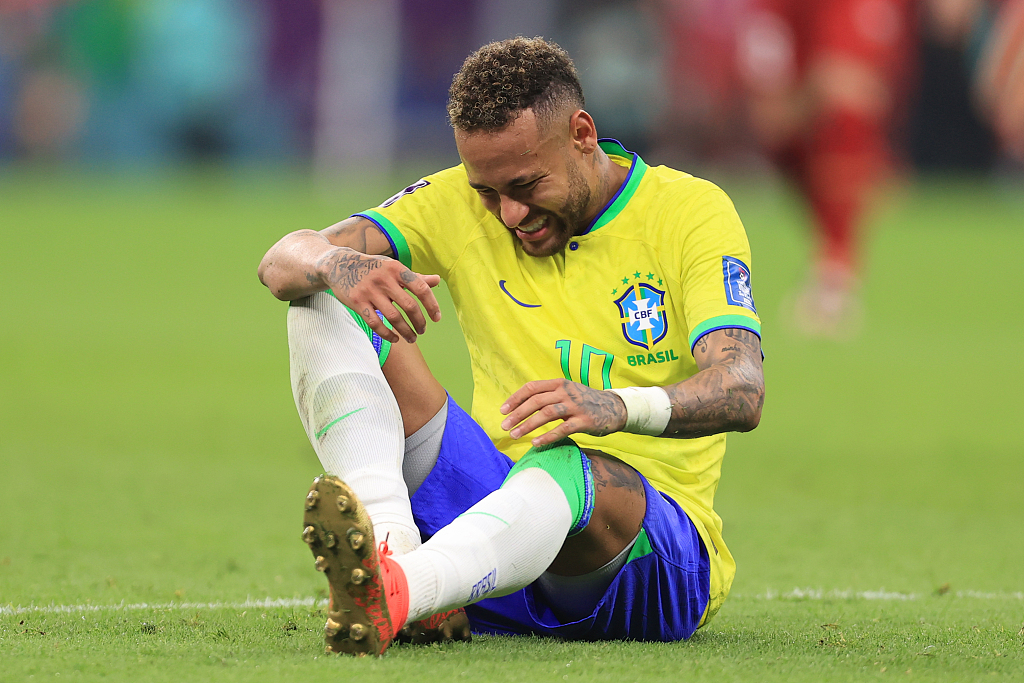 Neymar of Brazil hits the floor with an injury during their World Cup group clash with Serbia at Lusail Stadium in Doha, Qatar, November 24, 2022. (Photo: CFP)

Later in the day, Richarlison netted twice as five-time winners Brazil outclassed an organized Serbian side 2-0 in their opener. The Tottenham striker turned home a close-range finish on the hour mark before adding an acrobatic second that lit up the Lusail Iconic Stadium.

While Brazil have laid down a World Cup marker, there was the worrying sight of their captain Neymar going off after suffering a heavy knock. The Paris Saint-Germain superstar was seen limping heavily after the game as photos of his swollen ankle went viral.

The ashen-faced Neymar, who was constantly fouled by the Serbian defenders throughout the contest, declined to speak to journalists afterwards. Brazil doctor Rodrigo Lasmar told a press briefing that it remains to be seen if he'll miss Brazil's next game against Switzerland, who narrowly edged Cameroon 1-0 thanks to Breel Embolo's wonder strike. 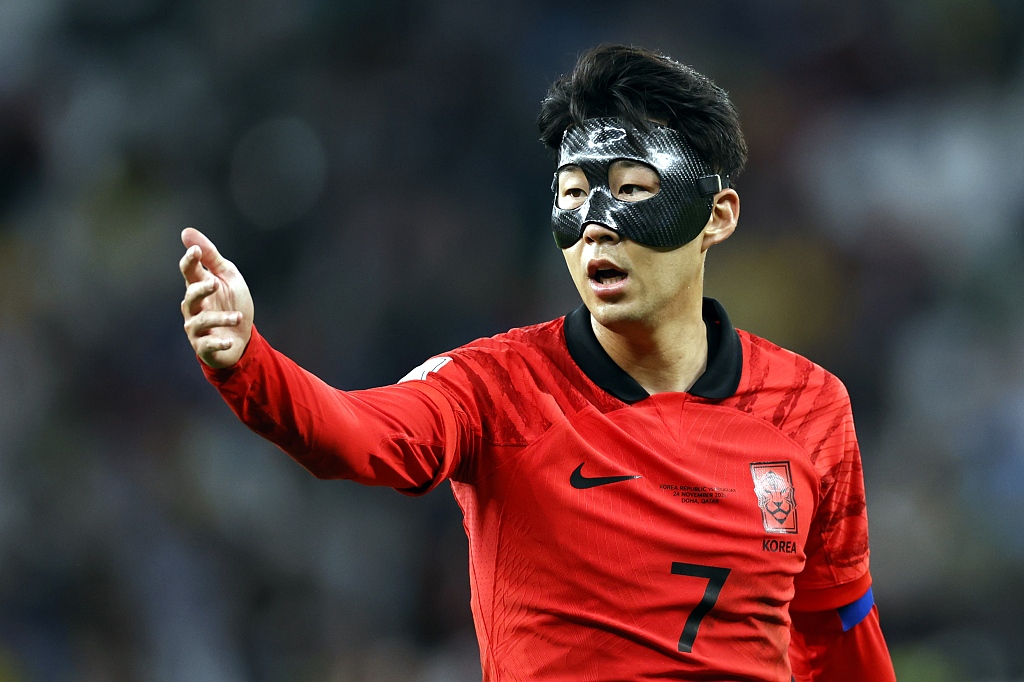 "We need to wait 24 to 48 hours to have a better assessment," he said. "We have not scheduled any MRI and tomorrow we'll have a new assessment. We need to wait, we cannot make any premature comments about his evolution."

Elsewhere, South Korea held Uruguay to a goalless draw at the Education City Stadium. Son Heung-min, who suffered a nasty collision while playing for Premier League giants Spurs earlier this month, started the game with a protective mask, but failed to make an impact for the Taegeuk Warriors.