Cristiano Ronaldo said on Sunday "there's no point in reacting in the heat of the moment," as he responded to Portugal's World Cup elimination. 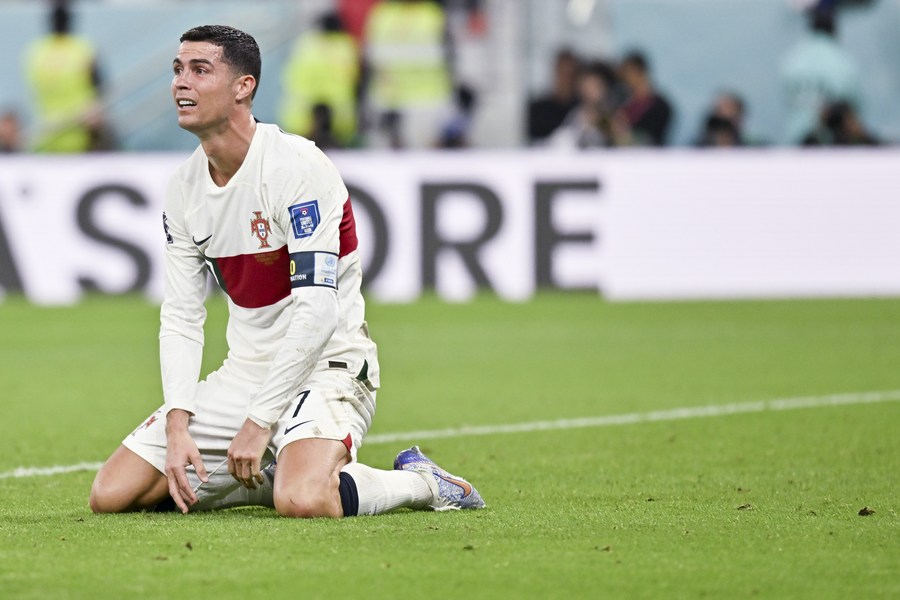 Cristiano Ronaldo of Portugal reacts during the Quarterfinal between Morocco and Portugal of the 2022 FIFA World Cup at Al Thumama Stadium in Doha, Qatar, Dec. 10, 2022. (Photo: Xinhua)

Ronaldo stayed in Qatar as many of the Portugal squad returned home and landed in Lisbon on Sunday afternoon.

"To win a World Cup for Portugal was the biggest and most ambitious dream of my career. Fortunately, I won many titles of international dimension, including for Portugal," Ronaldo wrote on Instagram.

His post did not talk about international retirement but he started Portugal's last two matches in Qatar on the bench, a decision which provoked debate in Portugal and across the football world.

"Let's hope that time will be a good counsellor and allow everyone to draw their own conclusions," he wrote.

The Instagram post was accompanied by a photo showing Ronaldo, head down, trudging off the field in Doha after the 1-0 quarter-final loss to Morocco on Saturday.

At 37, Ronaldo was playing his fifth World Cup. As soon as the final whistle blew he headed down the tunnel with tears streaming down his face.

Ronaldo is without a club after a bitter divorce with Manchester United.

According to the Portuguese press, Ronaldo threatened to leave the squad after he was dropped from the starting lineup, but that was denied by coach Fernando Santos, who will soon meet with the Portuguese Football Association to discuss his own future.

"I just want everyone to know that a lot was said, a lot was written, a lot was speculated, but my dedication to Portugal didn't change for an instant," Ronaldo added.

"I was always one more player fighting for everyone's goal and I would never turn my back on my teammates and my country."

"In the five World Cups I played, always alongside great players and supported by millions of Portuguese, I gave it my all. I left everything on the field. I never turned my back on the fight and I never gave up on this dream.

"Unfortunately, yesterday the dream ended. The dream was beautiful while it lasted."

Portugal central defender Pepe was asked about his former Real Madrid club mate, as he returned on Sunday. He said Ronaldo was "fine".

"I want to thank him, as well as all my teammates who gave their best," said Pepe.