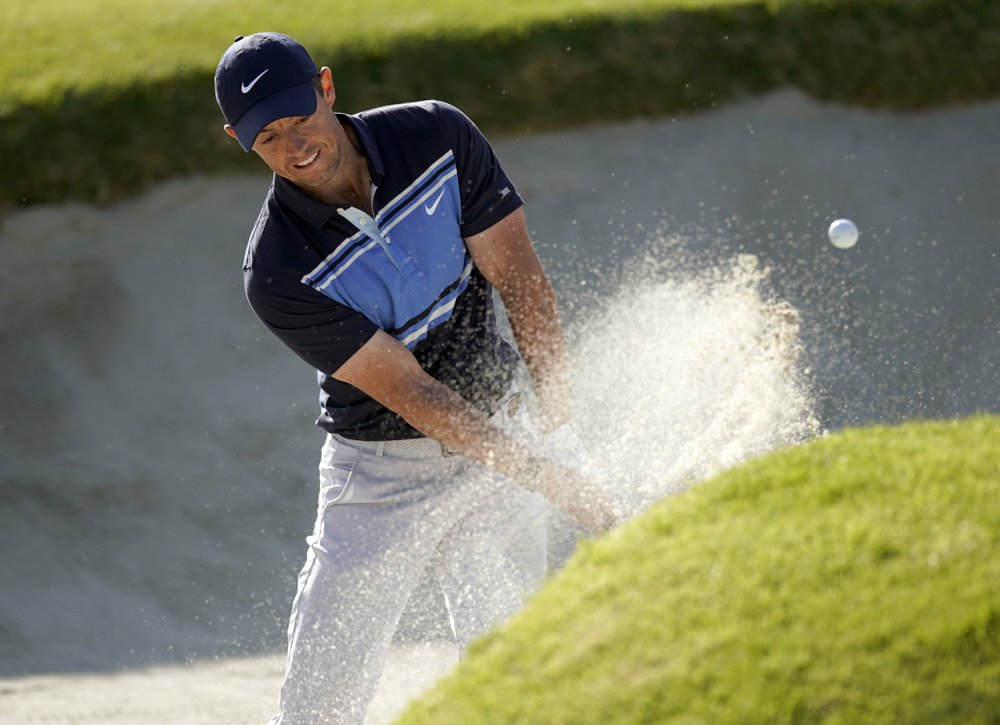 Rory McIlroy, of Northern Ireland, hits out of a bunker onto the 17th green during the final round of the Genesis Invitational golf tournament at Riviera Country Club, Sunday, Feb. 16, 2020, in the Pacific Palisades area of Los Angeles. (Photo: AP)

Rory McIlroy became the first top player to publicly reject the idea of a proposed new tour, saying he values his choice of where to play over whatever money the Premier Golf League is promising.

“I would like to be on the right side of history on this one,” McIlroy said Wednesday at the Mexico Championship.

McIlroy said the only thing that could change his mind were if all the top players decided to join, and he doesn’t see that happening.

“I think it’s very split at the moment,” he said.

Talk of a Premier Golf League has been around for about six years and picked up momentum — along with serious funding, primarily from Saudi Arabia — in recent months. Organizers have been talking to players and agents the last few months in the Bahamas, Australia and last week in Los Angeles.

Phil Mickelson, who played with officials involved during the pro-am in the Saudi International last month, said Sunday he was not ready to announce his intentions but might be ready to state his view publicly by The Players Championship.

Tiger Woods has said only that he and his people were looking into it.

The idea of the Premier Golf League is to invigorate golf by putting together 12 four-man teams that would be required to play 18 events — 10 of them in the U.S. — that feature 54 holes, no cut and a shotgun start to fit a five-hour broadcast window. Total prize money would be $240 million, and the top player could earn as much as $50 million.

“Money is the easy part,” McIlroy said. “It shouldn’t be the driving factor. Look, for some people it is. And we’re professional golfers and we’re out here playing golf to make a living. But at the end of the day, I value my freedom and my autonomy over everything else.”

PGA Tour Commissioner Jay Monahan sent a memo to players last month that effectively said that because the tour has contracts with title sponsors for a full schedule and television partners, anyone joining the Premier Golf League would have to give up their PGA Tour memberships.

The Premier Golf League’s schedule would not include the majors. And still to be determined is if the Official World Golf Ranking board — represented by major tours and golf organizations — would allow the league to get ranking points. The world ranking is used to help determine the field for majors.

For someone like Woods — the biggest draw in golf — to play in the new league, he might be required to play as often as 22 times a year if the league has an 18-tournament schedule.

When first asked about the new league at Torrey Pines last month, McIlroy said golf was entering a new era and the Premier Golf League proposal had exploited a few areas of weakness, without detailing what they were.

While he said then he didn’t believe it was the best way to go, McIlroy suggested it could be a “catalyst for some changes on this tour that can help it grow and move forward.” As an example, he mentioned rewarding top players.

He left no doubt where he stood on Wednesday.

“The more I’ve thought about it, the more I don’t like it,” he said. “The one thing as a professional golfer in my position that I value is the fact that I have autonomy and freedom over everything that I do.”

He used the World Golf Championships in Mexico as an example. Eight players from the top 50, including Woods and Brooks Koepka, decided not to play this week.

“For me, I’m out,” he said. “My position is I’m against it until there may come a day that I can’t be against it. If everyone else goes, I might not have a choice. But at this point, I don’t like what they’re proposing.”

McIlroy referenced Arnold Palmer speaking out against Greg Norman’s proposed world tour from the 1990s, in which the top 30 players in the world would meet at locations around the world. From that uprising, the PGA Tour developed the World Golf Championships in 1999, which brought together the top players from six tours around the world.