Russia plans to compete at 2020 Tokyo Olympics under national flag 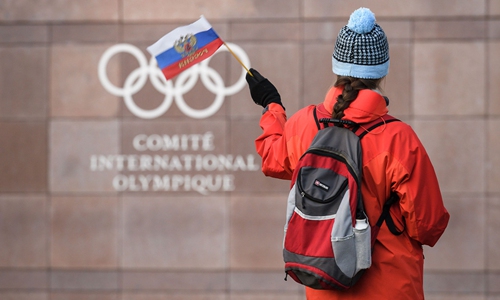 In this file photograph taken on December 5, 2017, a supporter waves a Russian flag in front of the logo of the International Olympic Committee (IOC) at their headquarters in Pully near Lausanne. (Photo: VCG)

The Russian Olympic Committee said Tuesday it expected that Russian athletes would take part in the 2020 Tokyo Olympics Games under the national flag despite a four-year doping ban.

"The Russian Olympic Committee is a rightful member of the Olympic movement," its president Stanislav Pozdnyakov told reporters after a meeting.

"Therefore we have every reason to believe that we will put together a team for Tokyo and do everything in our power for this team to perform under the Russian tricolor."

The World Anti-Doping Agency on December 10 banned Russia for four years from major global events, including the 2020 Tokyo Olympics and the 2022 World Cup in Qatar, over manipulated doping data.

WADA accused Moscow of falsifying data from a doping testing laboratory that was handed over to investigators earlier this year.

Russia has said it would contest the ban, with President Vladimir Putin slamming the sanctions as politically motivated.

Speaking on Tuesday, Pozdnyakov confirmed that the Russian Olympic Committee would support the decision of its supervisory board to defy the WADA ban.

Last week RUSADA anti-doping agency said it had "made a decision not to agree" with the four-year ban by the World Anti-Doping Agency's decision. The decision will have to be communicated to WADA before the end of the month, triggering the appeal process in the Lausanne-based Court of Arbitration for Sport.

Under the sanctions, Russian sportsmen and women will still be allowed to compete at the Olympics next year and the 2022 Beijing Winter Olympics, but only as neutrals and if they can demonstrate that they were not part of what WADA believes was a state-sponsored system of doping.