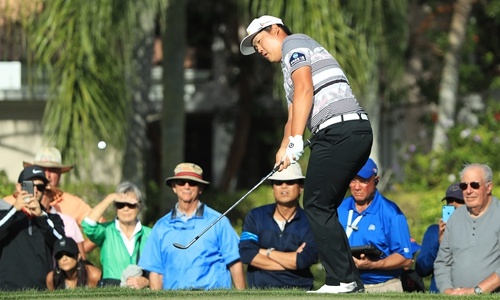 South Korean Im Sung-jae hit a series of clutch shots down the stretch to clinch his first PGA Tour victory in style, a one-shot triumph at the Honda Classic in Florida on Sunday.

Im, last year's tour rookie of the year, broke through in his 50th start by carding a four-under-par 66 at PGA National in Palm Beach Gardens.

He birdied the par-three 15th and 17th holes and then got up-and-down from a greenside bunker to par the last and finish at six-under 274 on the water-lined course, one of the hardest on tour.

Canadian Mackenzie Hughes (66) missed a 20-foot (six-meter) birdie putt at the last and had to settle for second place.

Overnight leader Tommy Fleetwood needed a birdie at the par-five 18th to force a playoff, but his hopes ended when he carved his second shot into the water after a spectator screamed out "get in the hole" during the Englishman's backswing.

A sad-faced Fleetwood (71) made bogey and finished third, two shots behind Im, who broke into a smile and hugged his caddie in the locker room when victory was assured.

"In Korea right now a lot of people are dealing with the coronavirus and it's a huge deal," said Im of the virus that is known to have infected nearly 4,000 people in his homeland.

"I'm just glad as a Korean player I could deliver some good news to my countrymen back home."

The 21-year-old, known as the tour's ironman because he plays nearly every week, has been pegged as a rising talent, and he showed why with his play down the home stretch.

Ignoring water waiting to gobble up a slightly misjudged or mis-hit shot, he took dead aim at the 15th and 17th holes, sticking his tee shot to inside eight feet both times and converting the putts with nerveless precision.

"I knew I was one [shot] back going into the last four holes," he told NBC television, speaking via his caddie who acted as interpreter.

"I wanted to get a little more aggressive rather than be tentative. I was hitting the ball really good and felt I could get at those pins.

"I've been in this spot many times. That helped me stay in the moment and I felt that experience helped, especially over the last few holes."

Runner-up Hughes almost achieved what would have been a shock victory ­after missing the cut in all of his five previous starts this year.

The world No.308 sank a 55-foot birdie putt at the 17th to keep the heat on Im, but could not add another birdie at the last.

"I was just grinding my butt off but unfortunately came up one short," he said.