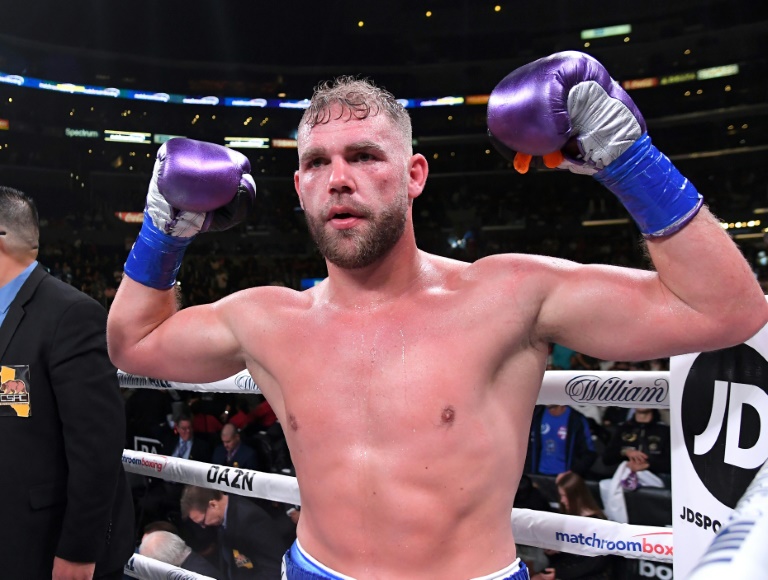 Boxing chiefs suspended WBO super-middleweight champion Billy Joe Saunders' licence on Monday after he offered men advice on how to hit their female partners during the coronavirus lockdown.

The British fighter released a video on social media using a punchbag to describe how to "hit her on the chin".

He apologised, saying he would "never condone domestic violence" and has now said he will donate £25,000 ($31,000) to domestic abuse charities.

But the British Boxing Board of Control (BBBoC) has announced the two-weight world champion's licence has been suspended, pending a hearing.

A brief statement from the governing body said: "The British Boxing Board of Control, having considered comments made by Billy Joe Saunders on social media, have suspended his boxer's licence pending a hearing under the board's misconduct regulation, at a time and venue to be confirmed as soon as possible."

Saunders, 30, told Talksport radio it was a "silly mistake".

"I didn't mean for anyone to get upset about it," he said. "There are people dying all around the world with coronavirus and I was just trying to take the heat off that a little bit.

"It clearly hasn't done. My sense of humour is not everyone's cup of tea."

Promoter Eddie Hearn said he was appalled by the "idiotic" comments.

"It's one step forward, four steps back with Billy Joe Saunders and it is frustrating," he said. "You just can't do it, especially when you're in your position."

"People who are in abusive relationships are watching that video," Hearn added. "You cannot do it, it's unacceptable."

Saunders issued an apology earlier this month after he called an airline to say a friend was displaying coronavirus symptoms. The friend was removed from the flight along with Saunders' trainer Ben Davison and stablemate Josh Taylor.

In 2018 Saunders was fined £100,000 and issued him with a severe reprimand about his future conduct by the BBBoC after video footage emerged of him appearing to offer a woman drugs.

His actions were filmed from his car and seemingly showed him offering drugs to the woman to perform a sex act, as well as asking her to punch a passer-by, which she did, before he drove off.