Scratched: Kentucky Derby now set for September due to virus 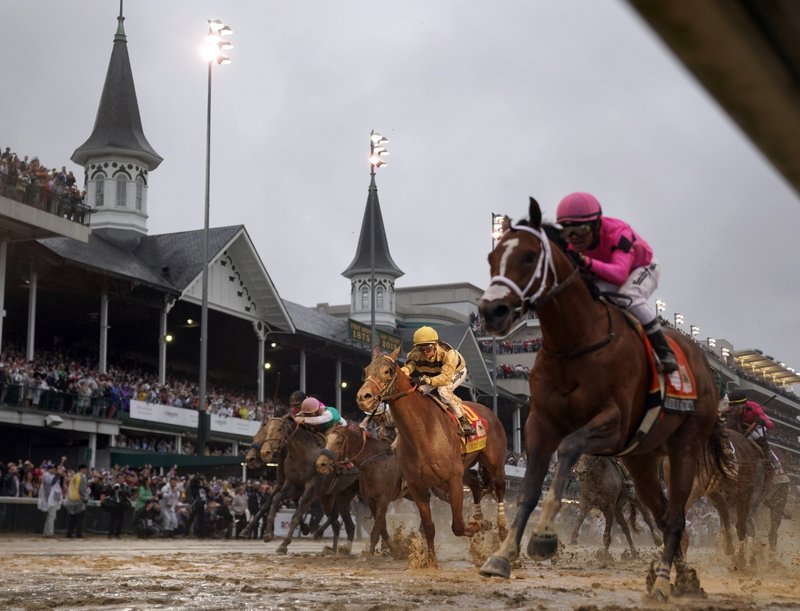 In this May 4, 2019, file photo, Luis Saez rides Maximum Security, right, across the finish line first against Flavien Prat on Country House during the 145th running of the Kentucky Derby horse race at Churchill Downs in Louisville, Ky. (Photo: AP)

The Kentucky Derby was postponed until September on Tuesday, the latest rite of spring in sports to be struck by the new coronavirus along with the Masters, March Madness and baseball season.

The Derby, America’s longest continuously held sports event, had been scheduled for May 2. It will now be run Sept. 5, kicking off Labor Day weekend.

“We’ll roll with the punches, and feel very, very good that September is the right date,” Bill Carstanjen, CEO of Churchill Downs Inc., said on a conference call.

It’s the first time the Derby won’t be held on its traditional first Saturday in May since 1945, when it was run June 9. The federal government suspended horse racing nationwide for most of the first half of the year before World War II ended in early May, but not in time to hold the first leg of the Triple Crown that month.

The date change still must be approved by the Kentucky Horse Racing Commission at its meeting Thursday. Still to be decided are the dates of the next two legs of horse racing’s showcase series — the Preakness and Belmont.

Carstanjen said the September date was chosen after talks with NBC Sports, which televises the Triple Crown races, based on the limited number of sports events that weekend and hotel availability in Louisville.

Churchill Downs clearly wasn’t interested in running the 146th Derby without fans in the stands, which is what other tracks have been doing, including Santa Anita in California, Oaklawn in Arkansas and the Fair Grounds in Louisiana.

“We feel confident we are going to run the Kentucky Derby and run it with a crowd,” Carstanjen said. “It’s a participatory event.”

The race itself lasts just two minutes, but the partying and socializing goes on throughout Derby week, with celebrity-stuffed charity galas and private house parties. Last year’s race drew 150,729 fans.

The tradition of sipping mint juleps, donning fancy hats and dress clothes, and the crowd singalong to “My Old Kentucky Home” as the horses step onto the track has always made the Derby more than just a sports event. People who pay little attention to horse racing the rest of the year typically watch the Derby and wager on it either formally or in pools set up at parties.

The Derby was first run in 1875 and has gone uninterrupted, even through the Great Depression and World Wars I and II.

In 1943, there were travel restrictions imposed by World War II and no out-of-town tickets were sold. Still, the Derby went on, with Count Fleet winning in front of 65,000. The colt won the Triple Crown that year.

The Kentucky Oaks, the race for filles held on Derby eve, is also hugely popular, especially among Louisville locals. It first began in 1875. It will be run Sept. 4.

Horses have been training and racing to earn points that translate into berths in the 20-horse Derby field even as the rest of the sports world has mostly shut down because of the virus pandemic. Horses have only one chance in their lives to compete in the Derby, Preakness and Belmont stakes, which comprise the Triple Crown for 3-year-olds.

Carstanjen said points already earned by horses would be maintained, while existing races at tracks across the country would be added to the Road to the Kentucky Derby qualifying process.

“This will be fun and give fans more time to learn about this year’s crop of 3-year-olds,” he said.

The Derby, the first leg of the Triple Crown, draws strong TV ratings. By moving it to Sept. 5, the race wouldn’t conflict with Notre Dame football, satisfying NBC Sports, which televises both. The University of Louisville has an away football game that day.

The Preakness is scheduled for May 16 at Pimlico in Baltimore, and the Maryland Jockey Club said no decision has yet been made on the second leg of the Triple Crown.

The Belmont is set for June 6 in New York. The New York Racing Association said “decisions about large-scale public events must prioritize public health and safety above all else.” NYRA added that it will update the status of the Belmont “only when that process has concluded to the satisfaction of state and local health departments.”

For most people, the new coronavirus causes only mild or moderate symptoms, such as fever and cough, with the vast majority recovering in about two weeks.

Carstanjen said Churchill Downs alerted Pimlico and Belmont Park as it got close to completing a new date with NBC Sports.

“They were receptive and had their own questions. There is time in the calendar that NBC can make available,” he said. “They just have to work it out together and I hope they do.”

NBC Sports said in a statement it appreciates the “traditional sequencing of the Triple Crown races,” but these are “uncharted waters” and the network will work with the Preakness and Belmont to “determine the most appropriate timing.”

Businesses in the Louisville area, including hotels, restaurants, gas stations, grocery and liquor stores, depend on the Derby to earn a large portion of their revenue for the year. Almost all such entities raise their prices significantly during the Thursday, Friday and Saturday of Derby week.

The Derby has an estimated economic impact of $400 million on the Louisville area.

The Kentucky Derby Festival had already postponed some of its early events until April 5. The two weeks of events leading up to the Derby, highlighted by the Thunder Over Louisville fireworks show, have a local economic impact of $127 million.

The NBA and NHL have suspended their seasons indefinitely. Major League Baseball has postponed the start of its season until mid-May at the earliest, and one of the biggest events to be called off was the NCAA basketball tournament known as March Madness that captivates the country for three weeks. Another spring fixture postponed until September was the Boston Marathon. Colleges have canceled spring sports.