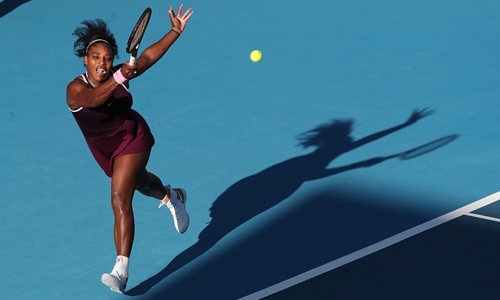 Serena Williams is ominously back to winning ways as she looks to finally complete her long quest for a record-equaling 24th Grand Slam title at the Australian Open.

The American has been on the cusp of history since 2017, when she won her 23rd Major trophy in Melbourne, but after returning from giving birth has suffered straight-sets defeats in four Slam finals.

The signs are good for the 38-year-old Williams, who broke a three-year title drought at last week's Auckland Classic - a result that will not have gone unnoticed by her younger rivals.

Australia's world number one Ashleigh Barty and defending champion Naomi Osaka are among her genuine challengers, but pressure and expectation will also pose problems for Williams as she pursues the 24 Grand Slam titles won by the Australian Margaret Court between 1960 and 1973.

"That was really important for me and I just want to build on it," Williams, now ranked ninth in the world, said after triumphing in Auckland on Sunday.

The former number one, who celebrated on court with daughter Olympia, donated her $43,000 winner's cheque to victims of the Australian bushfires.

Practice and qualifying have been disrupted in Melbourne this week because of toxic air pollution from the deadly fires, but organizers are confident the tournament will proceed as planned.

Williams has now won 73 WTA titles over four decades and although she is scaling back the number of tournaments she plays, there is no indication she plans to retire imminently.

Williams' latest Grand Slam final heartbreak came at the US Open, where she was stunned by Canadian teenager Bianca Andreescu.

Williams - the highest-paid female athlete in the world last year with earnings close to US$30 million, according to Forbes - afterwards played down her bid for Court's record.

At least she will not encounter the 19-year-old Andreescu, who is out of the Australian Open with a knee injury.

Of the challengers to Williams, Barty will also have to deal with great expectations from the Melbourne crowd.

The 23-year-old Australian, who once took time off tennis to play professional cricket, won her maiden Major at Roland Garros last year.

But Barty has had a patchy start to the year after losing her season opener last week, going down in two sets in Brisbane to American qualifier Jennifer Brady.

She dismissed afterwards the hype in Australia surrounding her.

Japan's Osaka arrives for her title defense accompanied by her fourth coach in less than a year, Belgian Wim Fissette.

The 22-year-old squandered match point in losing to Karolina Pliskova of the Czech Republic in the semifinals in Brisbane on Saturday.

The 27-year-old Pliskova goes into Melbourne under the radar but the world number two beat American Madison Keys in the final to close the gap on Barty at the top of the rankings.

However, she is yet to win a Grand Slam and her best appearance in a Major was back in 2016, when she lost the US Open final to Germany's Angelique Kerber.

There will be added interest in Denmark's Caroline Wozniacki, the former world number one who finally broke her long Grand Slam duck in Melbourne two years ago, and who will retire after the tournament at the age of 29.