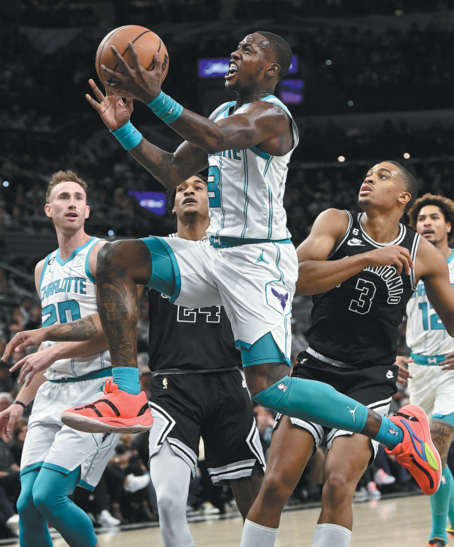 Charlotte Hornets' Terry Rozier drives to the basket during Wednesday's NBA game against the San Antonio Spurs. Rozier finished with 24 points as the Hornets routed the Spurs 129-102 in their season-opener. (Photo: AP)

SAN ANTONIO — With All-Star guard LaMelo Ball out with a sprained left ankle, Terry Rozier stepped up with 24 points and six others scored in double figures as the Charlotte Hornets routed the San Antonio Spurs 129-102 on Wednesday night.

The Spurs opened their 50th season in San Antonio inauspiciously, losing a season-opener for only the third time under Gregg Popovich.

"You start with the fact that we got thumped and you don't avoid it, you don't hide from it," Popovich said. "We got our butts kicked. And from there, you can look to improve."

This year's squad bears no resemblance to the veteran-led teams that won five NBA championships and appeared in a league-record 22 straight postseasons under Popovich.

Averaging 23.4 years, this is the youngest roster in Popovich's 27 seasons as San Antonio coach.

Charlotte took advantage of the inexperience.

The Hornets set franchise records in a season-opener for points in the first half (68) and opening quarter (38).

"If you're going to have a good year, you need a lot of good players," Charlotte coach Steve Clifford said. "So, every guy that you have is comfortable in their role and playing with confidence gives you a better chance."

And Charlotte demonstrated their comfort against San Antonio, shooting 51 percent from the field and 45 percent on 3-pointers.

Charlotte raced out to a double-digit lead in the opening five minutes as San Antonio missed its first seven 3-pointers and had more turnovers (three) than assists (one).

"They missed a lot of open 3s in the first quarter," Clifford said. "It's what I just shared with the guys: You've got to be able to watch the film and you've got to be able to say, 'What if they shot in the first quarter like they did in the third quarter?' Because you want to be able to win and make progress or lose. We did do some good things. I thought our ball pressure was good. They're hard to guard, but I was feeling, watching them play, they missed a lot of open shots, too."

San Antonio thrilled the sell-out crowd with a 13-2 run capped by Johnson's 3-pointer in closing to 76-64 with 7 minutes remaining in the third quarter.

Charlotte's lead never dipped below double figures in the second half, though.

Guard James Bouknight played 10 minutes hours after the Charlotte Mecklenburg County Police released details of his DUI arrest on Sunday morning. Bouknight was found intoxicated, unconscious and holding a gun with his vehicle in drive. Bouknight has a pending concealed carry permit, so he was not charged for possession of a gun.

Ginobili's retired jersey was updated to include the Hall of Fame designation. The sellout crowd interrupted Ginobili's speech twice with shouts of "Manu".

"If I could have played him tonight, then I would care, but he doesn't play, so screw him," Popovich said with a wry grin. "What has he done for us lately? Nothing."

Popovich is widely known as something of a sommelier, enjoying a bottle of wine while gathering with players, coaches and friends.

The menu is going to have to change this season since the Spurs have six players that are under the legal drinking age of 21.

"I was at dinner with one of my players, who will not be named, just the two of us. And I ordered a glass of wine, and he tried to order it too," Popovich said. "I said, 'Wait a minute, what is your mom and dad going to say if you went to dinner with Coach Pop and you are out there drinking? And it's illegal for you to drink. We can't do that.' He said, 'Oh, yeah. OK.' So, he had bubble water or sparkling water, whatever the hell that awful stuff is."