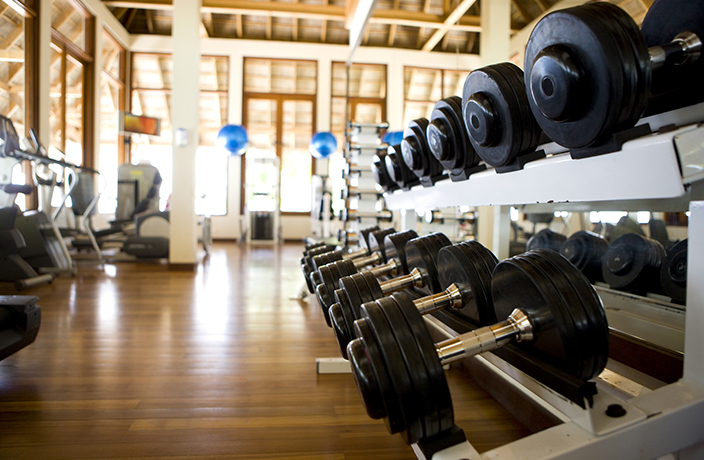 GUIYANG, China, July 27 (Xinhua) -- At around 8 p.m., Wang Xiaofen, who lives in Pancheng community, in Guiyang city, southwest China's Guizhou province, took the elevator downstairs to the first floor, where she then entered a smart gym using facial recognition. At this time, about 20 residents were using the facilities.

Wang walked straight to a leg press machine. She was working on a rehab program advised by her doctor after she underwent knee surgery in 2019 following a bicycling accident.

"I come here every night and practice for about 20 minutes every time. My doctor told me not to exercise too hard," Wang said. She originally planned to go to a commercial gym for exercise, but when she knew that a smart gym had been opened in her community, she turned to it.

"It's convenient that I live upstairs and I just need to take 3 minutes to go downstairs to the gym," she said.

The "smart gym" Wang mentioned is the first 24 hour-a-day, seven day-a-week gym opened in Guizhou, which was officially founded on July 10 this year. All of the equipment is free of charge, except the treadmill, rowing machine and electric bicycle. A professional yoga instructor was hired to teach the residents how to do yoga.

"This gym offers physical testing and monitoring services, which residents could obtain through their mobile phones to make scientific exercise plans," said Li Wei, manager of the gym's development project.

A survey, conducted by the General Administration of Sport of China in 2015, shows that most respondents valued proximity when it came to choosing their gyms. And smart gyms meet the needs of such users.

Zhang Lei, a 32-year-old resident of the community, was not in the habit of working out over the past years since he began his career. He spent most of his spare time at home with his children or playing computer games. On the opening day of the smart gym, he spent 240 yuan (about 34 U.S. dollars) to buy a 12 month fitness card. And now he exercises in the gym at least four times a week.

"The equipment here is enough for regular exercise and we do not need to go a long way to a commercial gym," Zhang said, adding that the nearest commercial gym will need 10 minutes' drive without traffic and has no parking available.

"This smart gym was reconstructed from an empty space and it provides more options for residents at their leisure and improves their quality of life," Said Su Jin, manager of the community.

According to public information, smart gyms have already been trialed and spread in many areas in China such as in Beijing, Chongqing, Zhejiang and Hunan, since 2015.

"Smart gyms are becoming more and more popular as they satisfy the exercise demands of residents in cities," Li added.

Recently, around 30 residents came to the gym for training every night, most of whom were fond of the treadmill, rowing machine among others.

It is noticeable that the manager of the gym is considering hiring coaches to provide not only exercise instruction but also security services for any unpredictable security risks, as the gym at present has only an intelligent management system, under which some residents sometimes bring their children into the gym, which may cause problems.

As planned, the second smart gym will be set up in Guiyang soon. "The gym in Pancheng community just covers 166 square meters and its space is limited," Li said, adding that he hopes to get more than 200 square meters for a new gym in the future, where he could place more equipment.