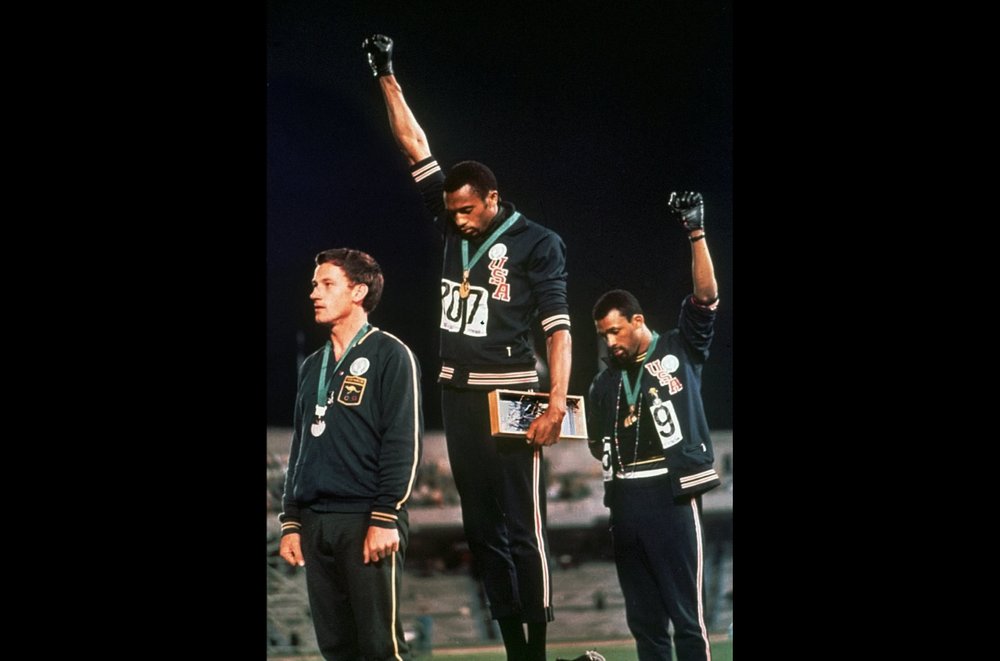 In this Oct. 16, 1968 file photo, US athletes Tommie Smith, center, and John Carlos raise their gloved fists after Smith received the gold and Carlos the bronze for the 200 meter run at the Summer Olympic Games in Mexico City. (Photo: AP)

Soccer players who defy Olympic rules by making protest gestures at the 2020 Tokyo Games will be supported by their global union.

Freedom of speech on issues like anti-discrimination and gender equality needs to be protected from “a hypocritical rule,” FIFPro general secretary Jonas Baer-Hoffmann said Wednesday at a United Nations labor agency conference.

The International Olympic Committee revived the debate on athlete rights this month by publishing details of protests in venues and medal ceremonies that can lead to disciplinary action, including being sent home from Tokyo.

Taking a knee, hand gestures with political meaning — such as raised fist salutes — and snubbing a fellow medalist on the podium are specific types of demonstrations long prohibited by Rule 50 of the Olympic Charter.

“We feel their freedom of expression overrides any other interest that may be in play here,” said Baer-Hoffmann, whose union represents 65,000 professional players.

He praised players who have fuelled “these fundamental debates” in soccer by speaking out about racism and equal pay for women.

“They are trailblazers but, on the one hand, they are being welcomed by people to take this forward and make sport appear as a change agent in society,” Baer-Hoffmann said. “And, on the other, now we have a hypocritical rule that says if you do it in our venues, we think this is a sanctionable offense.”

“This is absolutely unacceptable,” the union official said on the sidelines of an International Labor Organization conference about athlete working conditions, also attended by Olympic officials.

The IOC says political neutrality is key to keeping the Olympics a place where athletes worldwide can compete together in peace.

Political opinions can be expressed in Olympic venue interviews and on social media accounts, according to the new guidelines drafted after consultation by the IOC athletes’ commission.

The Tokyo Games soccer tournaments are a 16-team event for men and 12 for women . They kick off on July 22, two days before the opening ceremony, and end on Aug. 8.

The United States will be the women’s favorite if the team advances from a regional qualifying tournament. The team’s co-captain in qualifying is Megan Rapinoe, who has taken a strong stand speaking out on social issues.

“If the IOC decides to discipline players on this occasion, we will certainly stand by them to defend them,” Baer-Hoffmann said.

Not all of the more than 10,000 athletes in Tokyo, competing in 33 sports, have the same collective protection as soccer players.

“There is a danger you will have two classes of athletes at the Olympics,” said Brendan Schwab, executive director of the World Players Association, citing those who either have or lack resources to defend themselves.

Those who took a stand at past Olympics — including American sprinters Tommie Smith and John Carlos, and Czech gymnast Vera Caslavska at the 1968 Mexico City Games — had “suffered terribly for their protest” before being championed decades later, Schwab said.

“We believe the Olympic movement is strong enough, and in fact it is stronger,” he said, “if it provides a safe space for political protest in the course of the Olympic Games.”