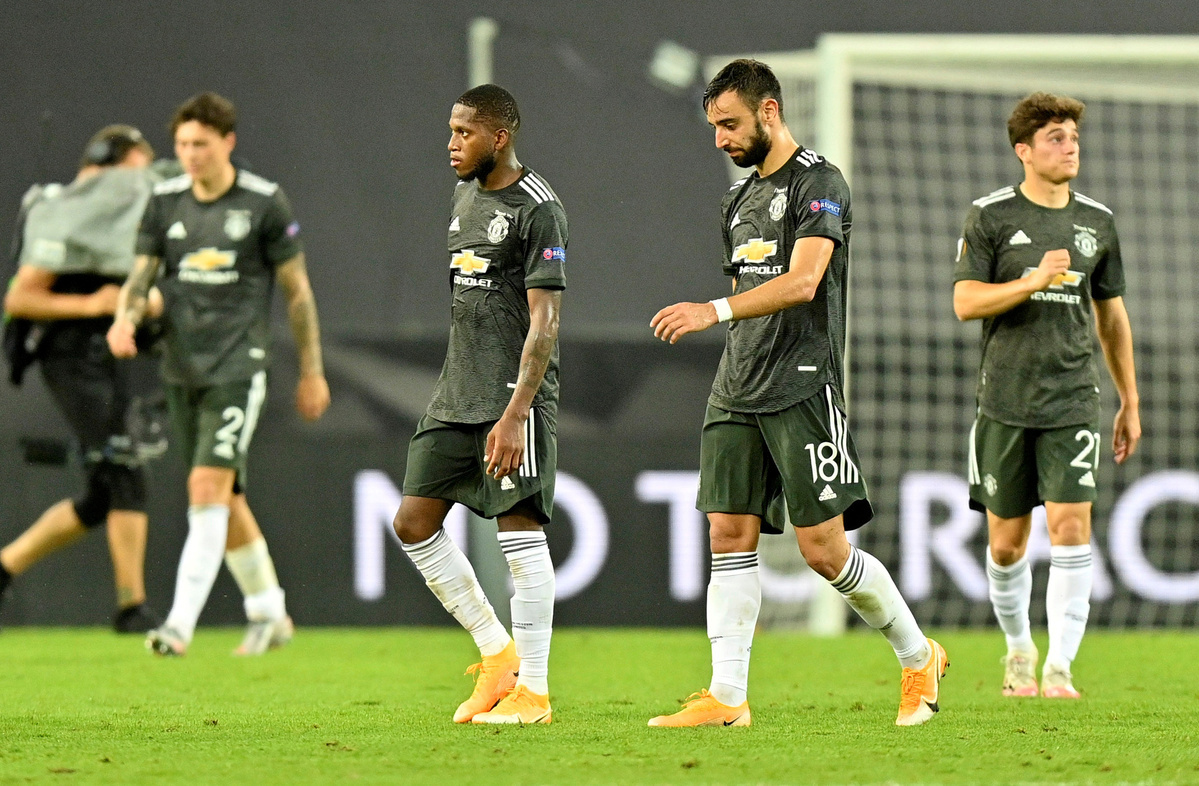 Ole Gunnar Solskjaer admitted Manchester United faces a busy few weeks in the transfer market after losing a third semifinal this season as Sevilla reached the Europa League final by coming from behind to win 2-1 in Cologne.

United was made to pay for its profligacy in front of goal after Bruno Fernandes' early penalty put the English side in front.

United had already secured its place in the Champions League next season by finishing third in England's top flight, but an over-reliance on a small core of players was again exposed as Solskjaer did not make a single substitution until three minutes from time.

United's new Premier League campaign is scheduled to begin in just over four weeks' time and initial talks over the signing of Jadon Sancho have stalled with Borussia Dortmund insisting the England international will remain in Germany next season.

"We need to strengthen the squad depth of course. It will be a long season," said Solskjaer.

"I cannot say when or if transfers are going to be done, but we are looking at it. It is a quick turnaround. We just have to be 100 percent sure when we do those deals."

Sevilla has now won 25 of its last 26 Europa League knockout ties and will believe it is destined to win the competition for a sixth time when it faces Inter Milan or Shakhtar Donetsk in Friday's final.

"This is the best Manchester United of the last few years and the form team in England so it is normal that we had to suffer," said Sevilla boss Julen Lopetegui. "We are very excited for the final, but it will be the hardest game yet and we have to prepare."

Lopetegui is enjoying a renaissance in Seville after a tough couple of years when he was fired as Spain coach on the eve of the 2018 World Cup for accepting the role as Real Madrid manager and then fired again just months into his time at the Santiago Bernabeu.

United defender Harry Maguire insisted the "best side lost" after the defeat.

"The boys are devastated. We created numerous chances. The best team lost. They punished us for missing chances. They didn't make many chances to be honest," Maguire told broadcaster BT Sport.

"We worked our socks off and deserved to win and get through. We fell short in a semifinal for the third time this year.

The defeat means United is now without a trophy in three seasons.

"We want to win silverware as soon as possible," added Maguire.

"Tonight we turned up and the best team lost. Perhaps that bit of inexperience cost us－we shouldn't have conceded that second goal."

Sevilla is now unbeaten in a club-record 20 games but was unsettled by the pace and movement of United's front four early as Marcus Rashford was wiped out by Diego Carlos after his initial effort was saved by Bono.

Portuguese playmaker Fernandes has ensured United's early season woes from the spot are long forgotten as the 25-year-old converted his eighth penalty for the club.

Sevilla grew back into the game and leveled with a fine team goal on 19 minutes.

On-loan Madrid leftback Sergio Reguilon is in demand from a host of top European clubs and his run opened up the United defense before his cross was swept home by former Liverpool winger Suso.

Despite the lack of a crowd in Cologne there was no lack of passion or tension as Sevilla were roared on by their substitutes, staff and directors, and tempers flared with both benches exchanging words.

"It is one of the curiosities of this situation (playing behind closed doors)," added Lopetegui. "The support of your teammates is important."

United rode out the Sevilla storm and had a host of chances early in the second half to go back in front but a combination of Bono, poor finishing and brave last-ditch defending kept them at bay.

Anthony Martial was the biggest culprit in terms of United's missed chances. The Frenchman was denied three times when one-on-one with second-choice stopper Bono as United began to cut through Sevilla at will.

Lopetegui responded by sacrificing top scorer Lucas Ocampos for de Jong and his changes worked to perfection as Sevilla regained its composure before landing the sucker punch.

De Jong has had a difficult first season in Spain, but went a long way to redeeming himself as he was alert to turn home a cross by former Manchester City winger Navas with the United defense sleeping, leading to a confrontation between Fernandes and his teammate Victor Lindelof.