Song goes from chillin' to thrillin' 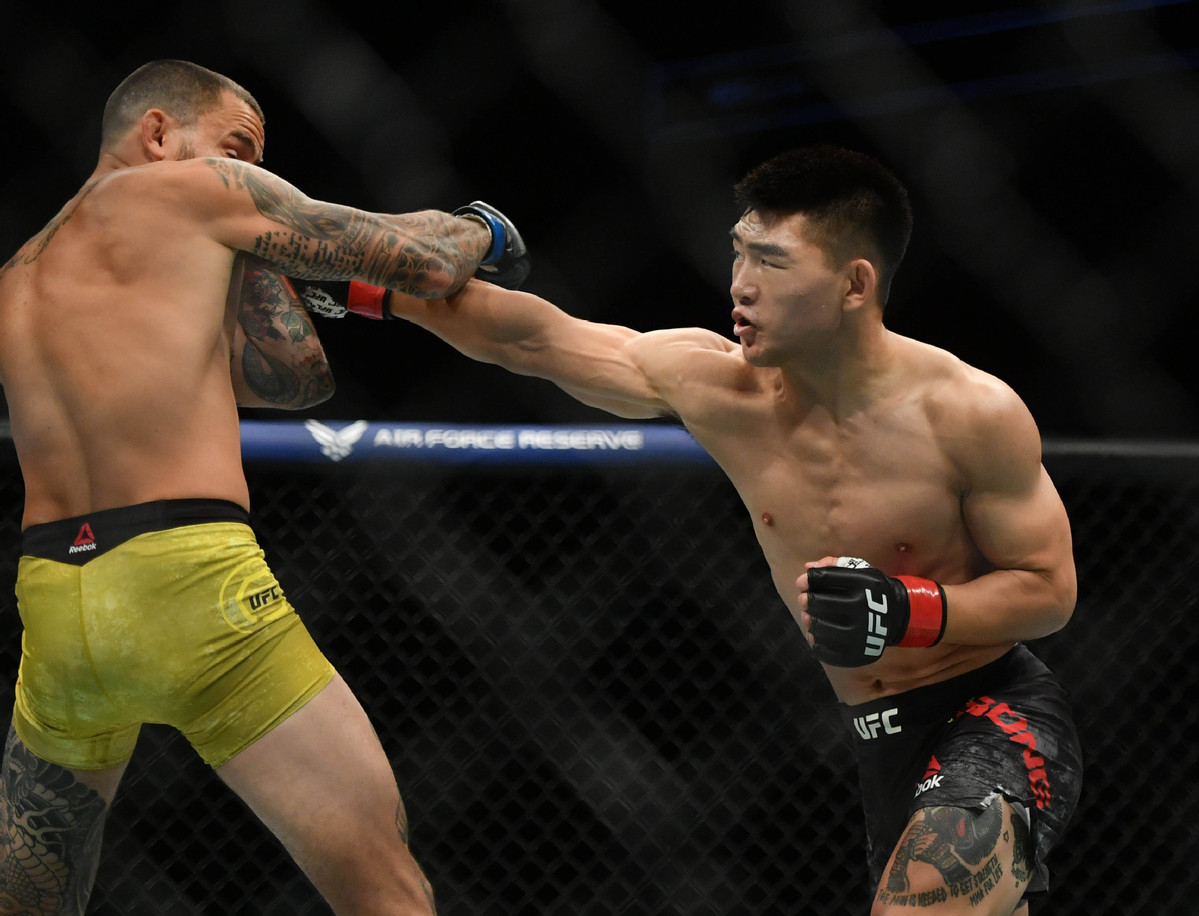 China's Song Yadong cuts through the defenses of Ecuador's Marlon Vera with a straight right during their UFC featherweight bout at VyStar Veterans Memorial Arena in Jacksonville, Florida, on Saturday. (Photo: Agencies)

Two weeks ago, Song Yadong was happy feasting on fried chicken and cola, with counting calories far from the Chinese MMA fighter's mind during the sport's coronavirus-enforced shutdown.

Now Song is celebrating his fifth Ultimate Fighting Championship victory after a brave performance on Saturday in Jacksonville, Florida, where his lack of preparations were just as intimidating as his ferocious opponent, Marlon Vera.

"It was definitely the hastiest fight I've ever faced in my career. I wasn't ready even on the eve of the fight," Song said in the Octagon after beating Ecuadorian Vera via unanimous decision in a three-rounder at an empty VyStar Veterans Memorial Arena.

"I was literally sitting at home eating fried chicken and drinking coke just over two weeks ago, worrying nothing about any fight," Song said, recalling the moment at the end of April when he first heard from UFC about the fight.

Scoring 29-28 with all three judges, Song (16-4-1) snapped the five-fight winning streak of Vera (15-6-1) and tied South Korean striker Kim Dong-hyun's record as the longest unbeaten Asian fighter (five wins and one draw) in the history of the Las Vegas-based promotion.

Both usually bantamweights (135-pound), Song and Vera agreed to fight in the featherweight (145-pound) division, realizing that dramatic weight loss could potentially make them vulnerable to infection from the coronavirus.

The 11-bout fight night, headlined by Dutch heavyweight Alistair Overeem's second-round TKO win over American southpaw Walt Harris, wrapped up a weeklong, three-card flurry for the UFC in Florida-a bold statement of the promotion's determination to resume the action despite the virus crisis ravaging the United States.

Saturday night's event was still subject to various virus-related restrictions, with only essential staff allowed access to the venue. Despite the far-from-ideal circumstances, the 22-year-old Song reckons he has learned a lot about himself over the last week or so.

"To nail down a fight unprepared and out of shape knowing that I am far from my best is really encouraging. I think I have a lot to reflect on and to learn from this fight. It will help me get stronger in the future," said Song, who has been training at the Team Alpha Male gym under the guidance of UFC Hall of Famer Urijah Faber in Sacramento since 2017.

Ranked 13th in the bantamweight division as the only Chinese man cracking the top 15 in any UFC category, Song lived up to his cage moniker the "Kungfu Monkey" on Saturday.

The native of Heilongjiang province immediately went on the attack, landing the harder and crisper punches during the first two rounds.

And although Vera scored a pair of takedowns to control the action on the canvas for a period, Song out-punched the 27-year-old Ecuadorian 101-92 in significant strikes and had the advantage in two of three rounds, according to ESPN Stats &Information research.

"I was thinking it was maybe a split decision, but when I heard it was a unanimous decision, I felt surprised," said Song.

As the one of the youngest Chinese fighters under contract with UFC, Song has gradually elevated his status as a top prospect in the division, inspired by trailblazing compatriots such as women's strawweight world champion Zhang Weili, as well as Faber's expert guidance.

"Watching Weili retain her title in such a great fight in Vegas, I felt thrilled and proud that Chinese fighters could make the world applaud for us in this sport," Song said of Zhang's split-decision victory over Joanna Jedrzejczyk of Poland in her title defense in March.

As far as his own title aspirations are concerned, Song is still refraining from making any bold predictions, preferring instead to hone his skillset and become a more well-rounded performer.

An exceptional kickboxer, Song is now focusing on his wrestling technique, helped by the Alpha Male trainers and the legendary Faber, who at 30 still fights as a pro.

"I feel that I'm on the right track, and I trust my coaches, like Faber, and he's leading me the right way," he said.