MADRID, Nov. 17 (Xinhua) -- Spain confirmed their presence in the semifinals of the UEFA Nations League with an incredible 6-0 win against Germany on Tuesday night. 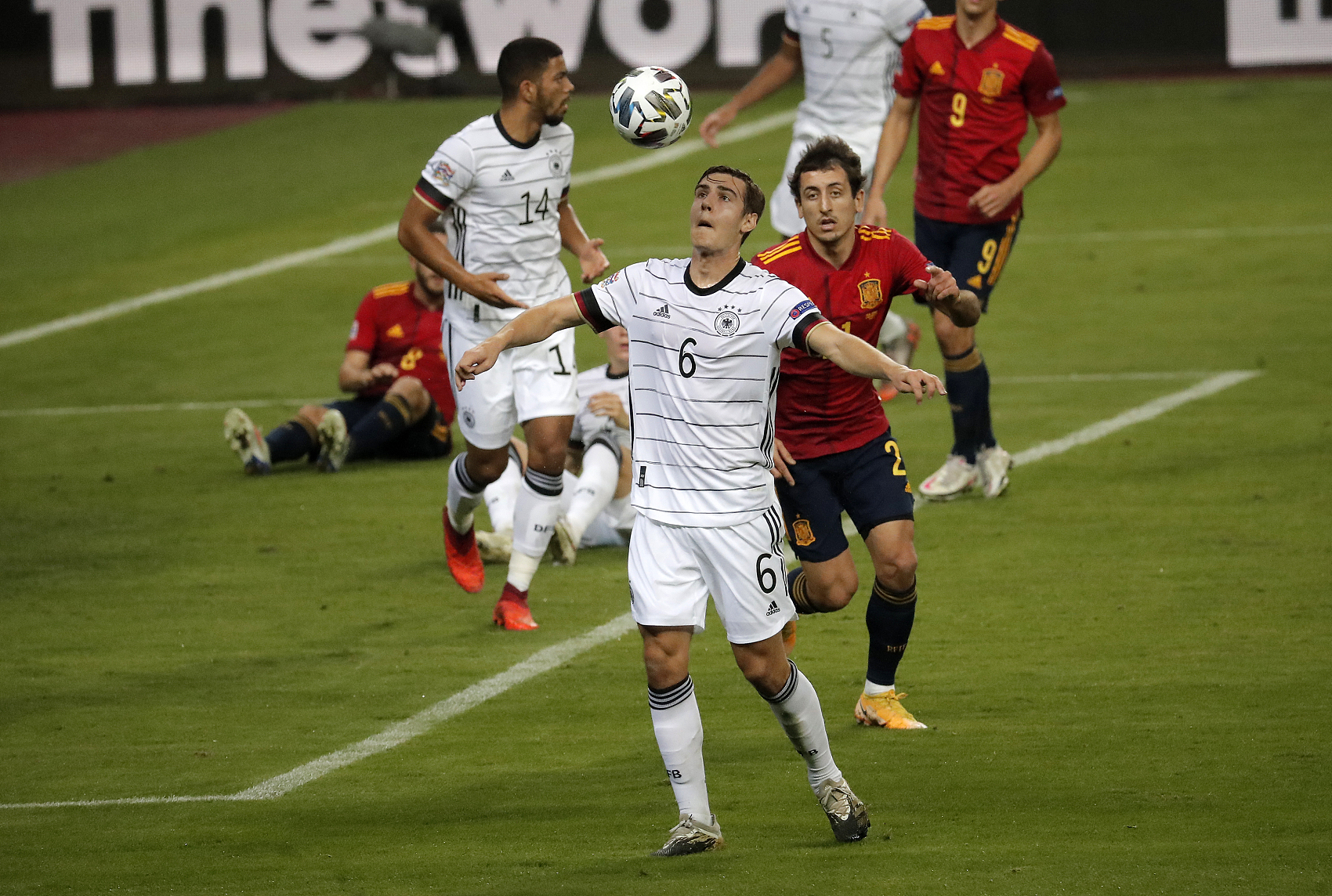 Mikel Oyarzabal (R) of Spain in action against Florian Neuhaus (6) of Germany during the UEFA Nations League Group stage League A Group 4 soccer match between Spain and Germany at La Cartuja Stadium in Seville, Spain on November 17, 2020. (Photo: CFP)

Ferran Torres became the first Spanish player to score a hat-trick against Germany and it was also the first time Spain have ever scored four goals - let alone six - against Die Mannschaft. Nevertheless, the score was a fair reflection of a game they dominated from start to finish against a rival that hardly threatened.

Spain went into the game at La Cartuja Stadium in Seville knowing they needed a win to finish ahead of Germany in their group, and coach Luis Enrique brought striker Alvaro Morata, midfielders Koke and Sergio Canales and left-back Jose Luis Gaya into his side to give more attacking options.

Canales lasted just 10 minutes before suffering a muscle injury but seven minutes later Morata opened the scoring with a powerful far-post header from a corner.

The goal gave the Spanish confidence and they began to pin the Germans back in their own half. Ferran Torres shot just wide, before Morata had the ball in the net again after a flowing move, only for the offside flag to rule his effort out.

Manuel Neuer did well to deny Torres on the half hour, but was beaten for a second time in the 33rd minute when the Manchester City forward smashed the ball home after Dani Olmo's header had bounced back off the crossbar.

Spain were rampant and Rodri added a third as the Germans again failed to defend a corner, allowing him a free header.

Sergio Ramos had to leave the game shortly before half-time after appearing to suffer a hamstring injury and was replaced by Eric Garcia.

Ramos' absence didn't seem to make any difference to Spain, as Torres netted his second and Spain's fourth of the night with a close range finish after Fabian and Gaya launched a counter-attack.

Torres made it 5-0 and completed his hat-trick in the 72nd minute with a crisp shot from outside of the area after another break involving Fabian.

Serge Gnabry hit the bar from distance for Germany, but it was their only chance of the entire game and substitute Mikel Oyarzabal added a sixth for Spain in the 89th minute after more good work from Gaya.