SPORTS Sports leagues seek return to play but with no guarantees

Sports leagues seek return to play but with no guarantees 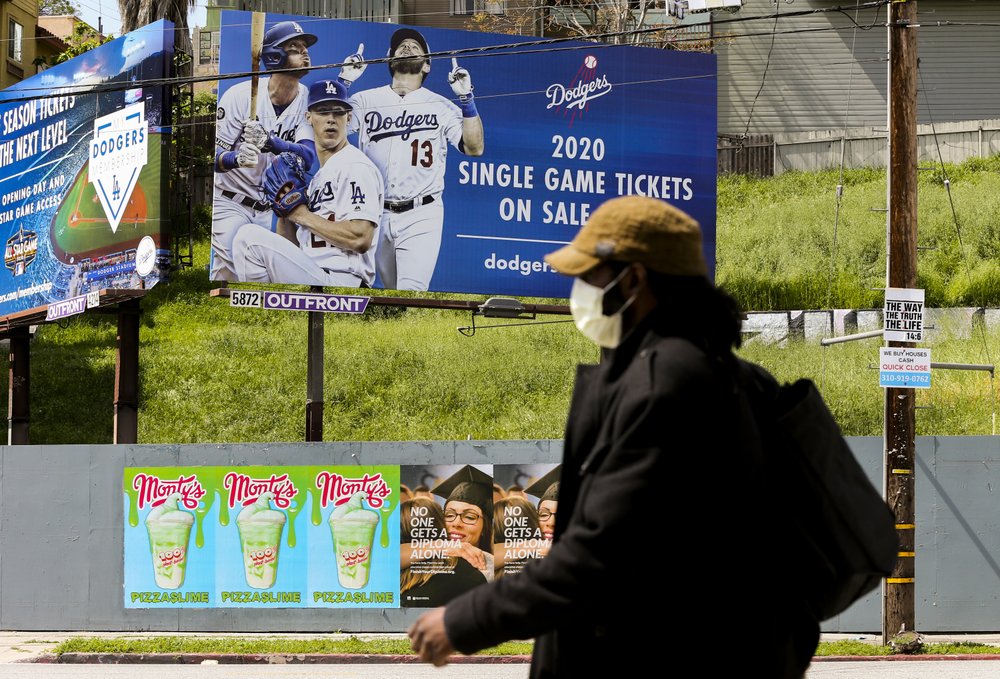 In this April 2, 2020, file photo, a pedestrian wears a hat and a face mask on Sunset Blvd., in the Echo Park neighborhood of Los Angeles. (Photo: AP）

With no games being played, recent sports headlines have centered around hopes and dreams — namely, the uncharted path leagues and teams must navigate to return to competition in the wake of the pandemic.

Virtually all leagues talk publicly about their desire to return before summer. But behind closed doors, they are hatching different potential plans: all 30 baseball teams playing in Arizona; home run contests to decide tie games; the Stanley Cup being hoisted in an empty arena that neither team calls home; end-of-season soccer standings decided by vote; college football games in spring.

Over the past week, The Associated Press spoke to more than two dozen policymakers, coaches and players across the globe to get their candid assessments of plans to return from the stoppages caused by the new coronavirus. The conclusion: While it’s critical to put optimistic restart scenarios in place, there is no certainty any of these plans will work without buy-in from politicians and an OK from players and medical experts. Underpinning it all would have to be a drastic ramp-up in testing, a vaccine or treatment breakthrough, or some other solution.

In short, the return of any sports, no matter how innovative the plan, will be risky and uncertain for the rest of this year and into 2021.

“It’s not about 22 players walking onto a pitch and throwing a ball out,” said FIFA Vice President Victor Montagliani, whose concerns about restarting soccer mirror those of all sports worldwide.

The organizers of the Olympics were among the last to postpone their event, then among the first to set a new date – exactly 52 weeks after the original July 24 cauldron lighting had been scheduled. The decision to reschedule for a date 15 months down the road came just before an unexpected spike in virus cases hit Japan. The worry that followed underscored the many open questions about the arc of the outbreak.

“I think everyone’s probably working on multiple options. It’s ’If this, then what?’” said Tim Hinchey, the CEO of USA Swimming, the sport’s governing body in the United States.

Virtually all the big-time team sports are coming up with scenarios to play games with no fans in the stands.

The Washington Post reported that while the NFL is publicly committed to its usual kickoff date in September, it is looking into contingencies that include shortening the season or playing in front of half-full or empty stadiums.

College athletic directors have come up with a half-dozen or more scenarios for football season, including, according to Oklahoma’s Joe Castiglione, a scenario in which part of the season would be played in spring. One theme gaining wide acceptance: If it’s not safe enough for students to return to school or attend games, then athletes shouldn’t be asked to return either. Without the millions of dollars from football, all college sports are in peril.

NASCAR, which has been holding virtual races, has given teams a tentative schedule under which the season would resume May 24 without fans.

The NHL has drawn up plans that include resuming the season this summer, going directly to the playoffs and/or playing games in empty arenas in neutral-site cities.

The PGA Tour announced a mid-June restart and meshed its schedule with the already reworked majors calendar. In a nod to the precariousness of it all, Andy Pazder, the tour’s chief officer of tournaments and competition, said if events cannot be held in compliance with health regulations, then “we will not do anything.”

That’s also where the NBA appears to be for now. The league that got in front of the coronavirus pandemic first, calling off games on March 11, is in a holding pattern. Most of the league’s conversations center on how to resume the season, not whether to cancel it.

In Australia, ambitious plans to resume play in the National Rugby League by the end of May got shot down by Prime Minister Scott Morrison.

England’s Premier League also says it wants to finish its season but would do so only “with the full support of the government” and when “medical guidance allows.” Meanwhile, in Scotland, a wild round of voting has already taken place to decide whether to lock in standings for leagues there and get ready for next season.

Major League Baseball in the US is talking about bringing all 30 teams to Maricopa County, Arizona, for a regular-season at spring training sites.

Dr. Anthony Fauci, the infectious disease expert who has been calling for restraint in resuming any normal activities, offered a glimmer of hope when he suggested sports could conceivably return. He suggested no fans in arenas and constant testing for the players, who would likely need to be quarantined in hotels for weeks or months.

Not all the players are on board.

“I’m going to go four or five months without seeing my kid when it’s born? I can tell you right now that’s not going to happen,” Ryan Zimmerman of the Nationals wrote in a diary for AP. Zimmerman’s third child is due in June.

Whether Zimmerman shows or not, baseball could be a vastly different game if it returns in 2020. Some other ideas floated include wrapping up the season in December, scheduling a multitude of doubleheaders with seven-inning games and quickly deciding ties with home run derbies.

Yet for all those scenarios, nobody’s quite sure what will happen if, despite all the precautions, an outbreak hits a team. Could one positive test eviscerate an entire season?

Before setting anything in motion, all the leagues are waiting for a consensus to emerge from government and health experts, to say nothing of players and owners.

Right now, Montagliani said, “the paramount skillset required from us is risk management and nothing else.”