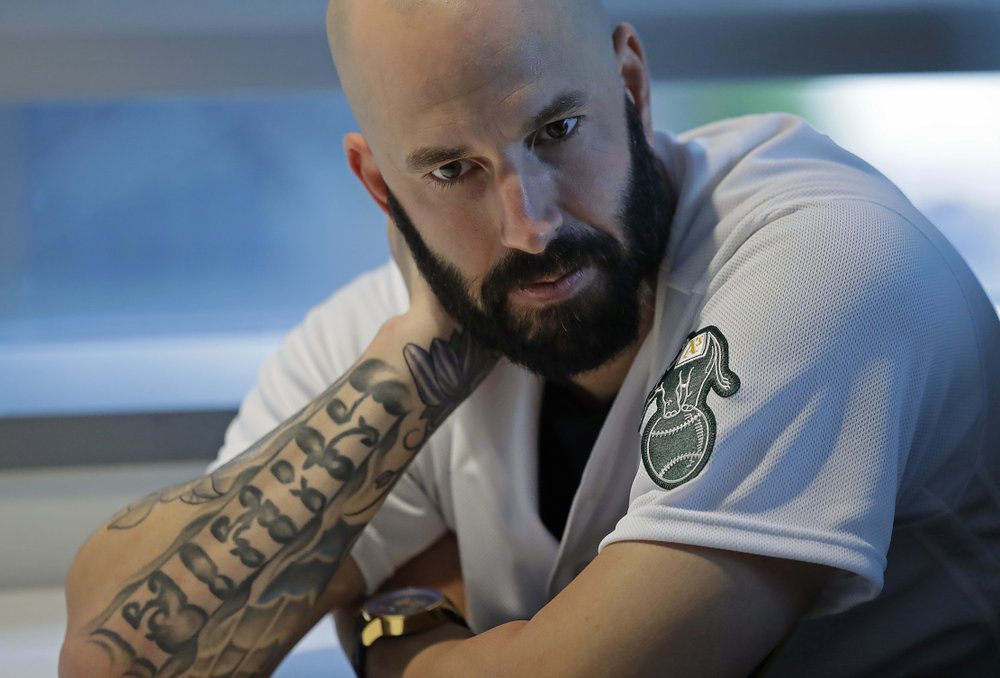 Oakland Athletics pitcher Mike Fiers ponders a question during an interview with the media on Friday, Jan. 24, 2020, in Oakland, Calif. (Photo: AP)

Baseball returns to the field next week when pitchers, catchers and cheaters report to spring training.

This year the players bring along dark clouds of scandal — the 2017 World Series champion Houston Astros have been tainted by their sign-stealing scam and the 2018 champion Boston Red Sox have been accused of similar subversion.

Teams hope once workouts start, the stain will fade.

“I think those stories lines will weave in and out, but that spring training is that juncture for individual fan bases to be optimistic about what the season ahead holds and it shifts back to that,” Toronto Blue Jays President Mark Shapiro said. “There’s a natural kind of rhythm to spring training that diverts to the positive stories.”

Some regard baseball’s blemish from sign stealing as vivid as the acne on the backs of steroids-swelled sluggers of the 1990s and early 2000s.

None of the current members of the Astros has publicly expressed contrition for breaking prohibitions against using a video camera to swipe signs from opposing catchers in 2017 and 2018. Baseball Commissioner Rob Manfred said spring training might be the appropriate time for a group mea culpa because fessing up individually during the offseason “could be sort of a treacherous road to go down.”

Former Astros pitcher Mike Fiers, now with Oakland, sparked the scandal in November when he went public in an interview with The Athletic. He took down 10% of major league managers and became for some an MVP — Most Virtuous Player.

Houston manager AJ Hinch and general manager Jeff Luhnow were suspended for the season by Major League Baseball on Jan. 13, and the pair were fired by the Astros later that day. Manfred’s conclusions led to the departures of Boston manager Alex Cora, the Astros’ bench coach in 2017, and new New York Mets manager Carlos Beltrán, Houston’s senior player during the title run.

Baker, at 70 the oldest big league manager, is tasked with keeping the Astros on track to become the first team to win 100 or more games in four straight seasons. He also will try to steady a core branded as villains by players and fans in other cities.

“You got to go forward and make sure that it doesn’t happen again,” Baker said. “It certainly is not going to happen on my watch here, and I don’t foresee it happening ever again because this has been an embarrassment for a lot of people.”

Cora’s punishment was delayed by Manfred pending MLB’s investigation into the Red Sox, which could conclude next week. Boston’s turmoil extended to the trade market, with a deal that would send former MVP Mookie Betts and former Cy Young Award winner David Price to the Los Angeles Dodgers as part of a three-team trade involving Minnesota. The delay in the deal being finalized prompted criticism from the players’ association, still smarting over the grievance loss of Chicago Cubs third baseman Kris Bryant, who unsuccessfully claimed the team violated the labor contract by delaying his big league debut until the day his free-agent eligibility would be delayed a year.

Bryant’s trade value increased with arbitrator Mark Irvings’ decision, because acquiring teams can be certain he cannot go free for two more seasons. The cost of top free agents was never more vivid than this offseason.

Right-hander Stephen Strasburg became a free agent shortly after winning the World Series MVP award, then stayed with the Nationals for $245 million.

On the December day he signed with the Yankees, Cole thanked pioneering player Curt Flood, former union head Marvin Miller and others who fought to gain free agency and then to preserve it.

“It’s so important that players know the other sacrifices that players made in order to keep the integrity of the game where it is,” Cole said.

All those big bucks and pre-Christmas deals contrasted with the slow markets of the prior two offseasons. Spending followed MLB’s fourth straight attendance drop, to 68.5 million, down from 73.8 million in 2015.

Washington will raise the championship flag for the first time in franchise history and will try to become the first repeat winner since the Yankees from 1998-2000. The previous longest stretch was between the 1977-78 Yankees and the 1992-93 Blue Jays.

Houston will go for its third AL pennant in four seasons, and the Yankees will try to reach the Series for the first time since 2009 — following their first decade since the 1910s without a World Series appearance.

“We can all look each other in the eyes and know, when it counts, we can all count on each other,” Nationals ace Max Scherzer said, “and we’re a bunch of winners.”

Champions always believe that. But it hasn’t worked out for any one them in two decades.