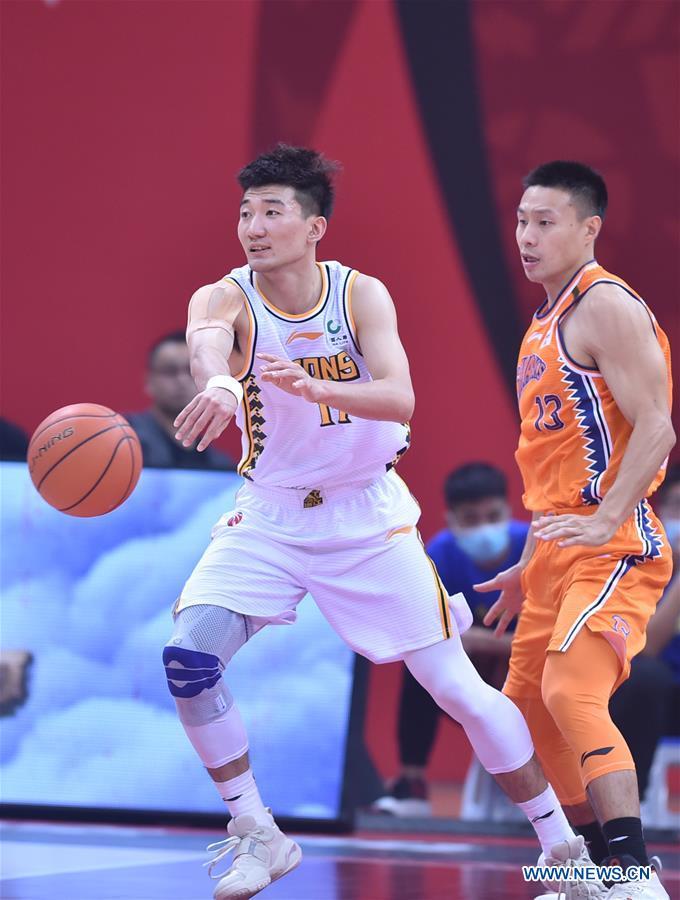 Sun Minghui (L) of Zhejiang Lions passes the ball during the first round match between Zhejiang Lions and Shanghai Sharks at the 2020-2021 season of the Chinese Basketball Association (CBA) league in Zhuji, east China's Zhejiang Province, Oct. 18, 2020. (Photo: Xinhua)

Zhejiang Lions guard Sun Minghui scored a game-high 41 points to help his team smash the Shanghai Sharks 122-94 in the first round of the 2020-21 Chinese Basketball Association league (CBA) on Sunday.

Sun also collected seven assists and seven steals, while Hu Jinqiu had a double-double with 31 points and 12 rebounds. Guard Luo Hanchen made a team-high 20 points for Shanghai, Jimmer Fredette contributed 14 points, and Marcus Edward Denmon only got one point and had five turnovers.

Center Hu Jinqiu made all six attempts in the first quarter, giving the Lions a 28-18 lead into the second quarter.

The Lions stormed to a 20-9 run before newly signed Liu Zheng made a three-pointer for Shanghai to cut the deficit to nine points and led 58-38 at the halftime break.

Jimmer Fredette scored eight points, helping Shanghai bounced back with a 12-5 run early in the third quarter. However, Sun Minghui from the lions was unstoppable. The Chinese national guard scored 13 points in a quarter, giving the lions an 89-74 lead into the last quarter.

The Lions kept a high shooting percentage in the fourth quarter and quickly sealed the victory.

"We see a big difference between their team game and ours. Our starters played together for the first time tonight, but we have no excuse. We've got to work hard," said Shanghai's new head coach Neven Spahija after the game.