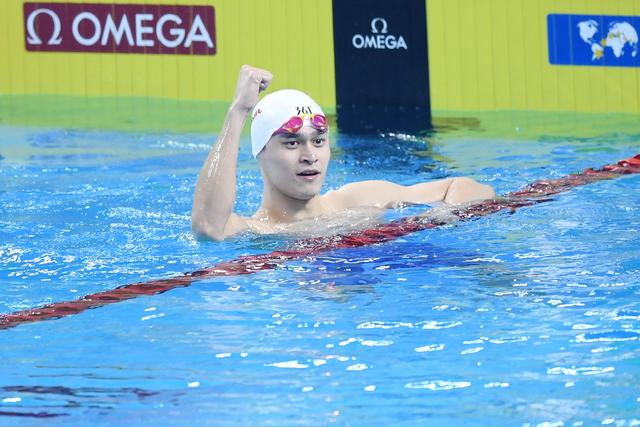 BEIJING, Jan. 18 (Xinhua) -- The drum-dance and hot air could not compare with Sun Yang when the three-time Olympic champion delighted the full-house audience as he smashed the men's 200m freestyle at FINA Champions Swim Series here on Saturday.

Sun stormed to a time of 1:45.55, beating his arch-rival Danas Rapsys of Lithuania (1:45.74). Dominik Kozma of Hungary followed with 1:48.98.
"I did not think it as a revenge since I lost to Danas in Shenzhen by 0.03 seconds. It is a good competition with the strongest rivals in the world. To me, Danas is very tough and also a respected friend," Sun said.
Comparing to Rapsys' starting response time of 0.63 seconds, Sun took 0.76, just an arm-length behind.
"I am always weak in the start and turns. Today I started even slower. Danas jumped off while I just started to move. That's what I need to improve. But I swam fast in the middle part."
"Strong rivals and the audience, all helped me to have a smooth victory today. I hope I can keep the form and work harder to realize my dream at the Tokyo Olympic Games. That is to stand on top of the podium."
The 28-year-old Chinese team captain who took a gold in 400m freestyle and a silver in 200m freestyle in Shenzhen leg on Jan 14-15, will continue to compete in the 400m freestyle in Beijing on Sunday.
"I just need a good sleep and prepare for tomorrow's battle. Water is my world, I am used to it," Sun said.