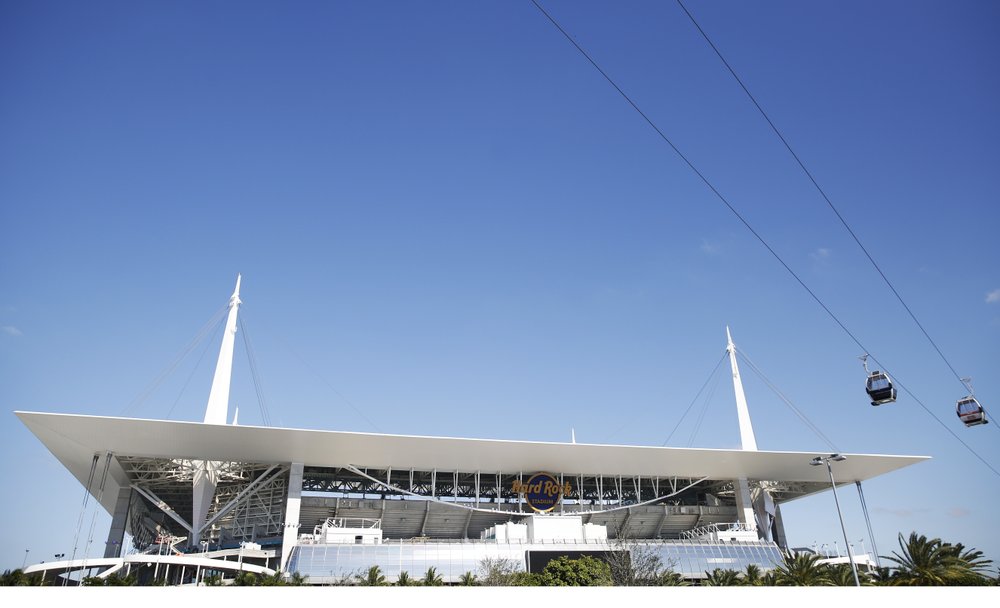 Hard Rock Stadium is seen along side of the new new gondolas during a tour of Hard Rock Stadium on Tuesday, Jan. 21, 2020, ahead of the NFL Super Bowl LIV football game in Miami Gardens, Fla. (Photo: AP)

It’s appropriate the Super Bowl to end droughts is Miami-bound.

The Who wouldn’t recognize the stadium. They performed at halftime the last time the Super Bowl took place in Miami, in 2010.

Now the game is back for the 11th time, the most of any city, as the NFL concludes its centennial season on Feb. 2.

“We’re thrilled to be back in Miami,” said Peter O’Reilly, NFL executive vice president of league events and club business development. “It feels like the right way to finish this 100th season, because we’ve had so many great games here.”

Miami is where Vince Lombardi won his final NFL title in the second Super Bowl, and where Joe Namath delivered on his guarantee, and where Peyton Manning and Drew Brees won their first championship rings.

But the Dolphins’ stadium, which opened in 1987, needed a significant makeover to remain part of the Super Bowl rotation. Team owner Stephen Ross, who also owns the stadium, spent his own money on the multiyear renovation.

“The Super Bowl would not be here had it not been for massive private investment by the Dolphins,” said Rolando Aedo, an executive with the Greater Miami Convention and Visitors Bureau.

Ten years between Super Bowls matched the longest such stretch for Miami.

“It was painful,” said Rodney Barreto, chairman of the Miami Super Bowl Host Committee. “But all credit to Stephen Ross, who wrote the big check to modernize the stadium.”

New trees and plazas transformed the grounds into much more than a parking lot, and the complex is now the home of the Miami Open tennis tournament. The stadium in the suburb of Miami Gardens also plays host to the college football championship, Miami Hurricanes games, international soccer matches and concerts.

“It’s maybe the only place in world where you can see Patrick Mahomes, Serena Williams, Lionel Messi and Jay-Z all in the same venue,” said Tom Garfinkel, the Dolphins’ president and CEO.

While the stadium looks much different from 10 years ago, when Brees and the Saints beat Manning and the Colts in the title game, the Super Bowl has changed, too.

Opening night will be Monday at Marlins Park, Super Bowl LIVE is a free fan event in downtown Miami’s Bayfront Park and a three-night music festival is planned at the Heat’s arena. Those events didn’t exist a decade ago.

In addition, the Super Bowl Experience will turn the Miami Beach Convention Center into an amusement park.

“There are so many things to do even if you’re not in the stadium on game day,” O’Reilly said. “The week has evolved a lot since 2010. It has really become a nine-day celebration leading up to the game.”

Miami has changed, too. The weather may be hotter and the traffic worse than 10 years ago, but there has also been a revival of downtown and surrounding neighborhoods. There are new museums and condo towers, and huge construction cranes dot the handsome skyline.

“We urbanized our downtown,” Barretto said. “Ten years ago you wouldn’t see people out after 8 at night. Now at 11 at night, you see them walking their dogs.

“These neighborhoods that were in their infancy 10 years ago now have nightlife. And Miami Beach is still Miami Beach. We’re excited about people coming to see all the new things.”

Word will spread — the NFL has accredited more than 6,000 media from about 25 countries.

For Miami, Aedo said, the benefits of such attention are incalculable.

“There’s always lot of discussion about economic impact, but the amount of coverage around the globe is priceless,” he said. “And Miami, more than any other US city, is global.”

Miami is also a playground for the wealthy, who will bring their private jets to town and make up much of the crowd on Super Sunday.

“It’s corporate America; it’s not Joe Football Fan,” Barreto said. “There will be hardcore football fans there, but this will be major corporations entertaining their top partners and salespeople. Its like an open checkbook, the money being spent.”

Everyone involved in hosting next week’s game agrees that 10 years without a Super Bowl is too long. Garfinkel laughed when asked about Miami’s chances of landing the February 2025 game, the next one to be awarded by the NFL.

“We’ll definitely put our name in the hat when the time comes,” Garfinkel said. “We want to put on a good show first.”