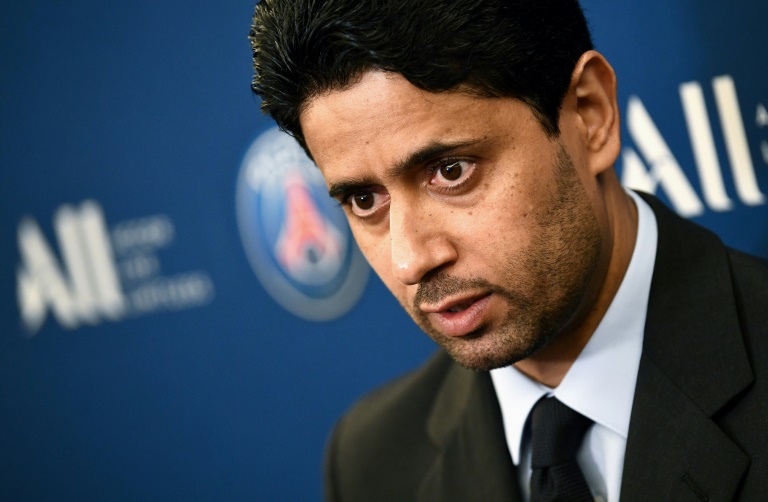 The Swiss attorney general's office (OAG) said in a statement on Thursday that the two had been charged "in connection with the award of media rights to various World Cup and FIFA Confederations Cup tournaments."

A third, unnamed suspect in the case -- described by Swiss prosecutors as "a businessman in the sports rights sector" -- was also indicted, the statement said.

Al-Khelaifi, who is also the boss of Qatari television channel BeIN Sports, is suspected of giving inappropriate gifts to Valcke -- including rent-free access to a luxury property -- in order to secure broadcast rights to prestigious events, including the World Cup.

In a statement, the PSG chief described the charge as groundless.

Valcke, formerly ex-FIFA boss Sepp Blatter's right-hand man, is suspected of awarding those rights to Al-Khelaifi in exchange for incitement and bribes.

"The investigations revealed that Valcke had received undue advantages from both co-accused," the OAG statement said.

But it said it had dropped "a criminal complaint of bribery" against him linked to the award of media rights for World Cup tournaments in 2026 and 2030 and other events, after FIFA withdrew the complaint it was based on following an "amicable agreement" with Al-Khelaifi.

"The withdrawal of the complaint meant that a procedural requirement for the prosecution of these offences was no longer met," OAG said, adding that it would "have to abandon the proceedings in relation to this allegation."

No basis in fact

Al-Khelaifi hailed that part of the decision

"After an exhaustive three-year investigation ... I am pleased that all charges of bribery in connection with the 2026 and 2030 World Cups have been dropped," he said in a statement, insisting that "the charges have not -- and have never had -- any basis whatsoever either in fact or law."

"While a secondary technical charge remains outstanding, I have every expectation that this will be proven completely groundless and without any substance whatsoever," he added.

The unnamed businessman meanwhile was indicted for bribery after paying Valcke's company Sportunited LLC a total of 1.25 million euros.

Valcke also stands accused of exploiting his position at FIFA between 2013 and 2015 to influence the award of media rights for Italy and Greece for various World Cup and other tournaments scheduled between 2018 and 2030 "in order to favour media partners that he preferred" in exchange for the payments from the unnamed businessman.

"The charge of criminal mismanagement relates to the fact that Valcke had not reported the mentioned advantages that he received to FIFA, as he was required to do as its Secretary General, thus unlawfully enriching himself," the statement said.

He has also been charged with falsifying documents, after Sportsunited's balance sheet listed those payments as loans.

While Al-Khelaifi was not indicted for bribery, the OAG laid out a serious case of incitement.

It found that Valcke was refunded a down-payment of around 500,000 euros that he had made to a third party on the purchase of a villa in Sardinia, after Al-Khelaifi purchased the villa through a company instead of Valcke.

"Valcke then received from Al-Khelaifi the exclusive right to use the villa for a period of 18 months – until he was suspended by FIFA – without having to pay an estimated rent in between about 900,000 euros and about 1.8 million euros," it said.

However, the OAG said that the suspicion that Valcke accepted a luxury watch from Al-Khelaifi "in return for exerting his influence as Secretary General of FIFA was not found to be substantiated."

Al-Khalaifi meanwhile complained that the three-year Swiss investigation had been "characterised by constant leaks, misinformation and a seemingly relentless agenda to smear my reputation in the media."

"For that reason, I have requested the relevant Swiss authorities to open a criminal enquiry into the conduct of the investigation," he said, adding that he was considering taking action against media that have "repeatedly published factually-unsupported and highly damaging articles."