Pro tennis has roared back to life in China, with the country's elite players vying for trophies at the inaugural leg of the Chinese Tennis Association (CTA) Tour, which wrapped up Saturday in the southwestern Yunnan Province.

The roar, however, was not as loud as many had expected, as all matches were played behind closed doors due to COVID-19 concerns. 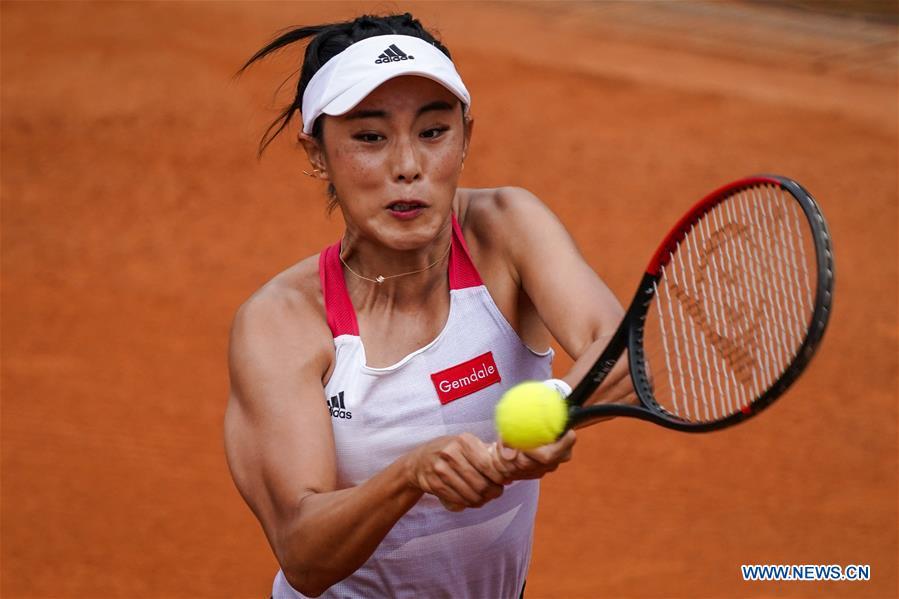 On Tuesday, women's world No. 29 Wang Qiang beat Zou Xinyi in the second round of the tournament, but only a smattering of applause rang around the 2,000-seat center court from a handful of players who were allowed to attend following social distancing guidelines.

Wang and Zou did not greet each other or shake hands at the net, but rather touched their rackets in compliance with social distancing rules. They did not shake hands with the chair umpire, neither.

This is what tennis looks like in a bio-secure "bubble," where strict health protocols are put in place to ensure the safety of everyone involved. Similar bubble quarantine settings have been used by the NBA and World TeamTennis and proved a success in stemming the spread of the coronavirus.

This time, the bubble is working again, with no COVID-19 cases reported throughout the week-long domestic tennis tournament.

"It's definitely different, but it's the safest thing to do at a most special time," Wang, top seed of the tournament, said after the second-round match.

According to the health protocols set out by the organizers, all players, coaches and staff members of the event were required to take nucleic acid tests upon arrival and confined to a sealed-off zone; a resort. Players must wear masks when entering and leaving the court and handle their own towels during the game, and ball kids must wear gloves on court. Besides, players have to wash their own clothes and towels after the hotel suspended laundry services.

"It felt a little bit weird on court without spectators," said Wang, who brought the Melbourne Park crowds to their feet when stunning Serena Williams in this year's Australian Open.

"But safety is the utmost. We are playing behind closed doors to protect ourselves and our fans," she added.

"For me, the hardest part of the 'bubble' system is washing clothes," said Gong Maoxin, a men's doubles player. "Perhaps I need to bring a small washing machine along to the next Tour event."

Zhou Bing, director of the CTA Tour, said epidemic prevention has been the top priority of the organizers throughout the event.

"The CTA Tour has been successfully launched because the epidemic has been largely contained in China. Now we must prove that we can stage tennis events responsibly," Zhou said, adding that health guidelines and protocols might become the new normal as pro tennis struggles to get back on its feet in the COVID-19 era.

The comeback of pro tennis suffered a major blow in June with Novak Djokovic's ill-fated Adria Tour. Several top players, including the world No. 1 himself, tested positive for the coronavirus after competing in the event, which lacked basic safety measures such as social distancing.

"The past few months have shown that we can never be too careful with the virus. It's better safe than sorry," Zhou said.

SOMETHING IS BETTER THAN NOTHING

The CTA Tour has provided some much-needed competitive action for Chinese domestic players, with the suspension of the pro tennis circuit since early March and the cancellation of the WTA's and ATP's 2020 China tournament swing.

However, a home tour means that top Chinese players like Wang have to enter a main draw comprised mainly of ITF-level players and even teenager players.

"I think we have to make do with what we have. It feels good just to be able to step on the court again and play some matches after a five-month hiatus," said Wang, who competed in both the women's singles and doubles at the CTA Tour to "play as many matches as possible."

Though the WTA has made a comeback this week with the Palermo Ladies Open, Wang said she would stick to playing domestic events for the time being, given the worsening global epidemic situation and international travel restrictions.

Last week, Wang pulled out of this year's US Open, scheduled to open at the end of August, citing safety concerns.

Zhang Zhizhen, China's top men's singles player, said after his first-round victory at the CTA Tour, that the quality of play on the tour is more than enough to help him shake off the rust, though it cannot compare to the ATP.

"As my first tournament after such a long break, the CTA Tour is helping me to find my rhythm on court," Zhang said.