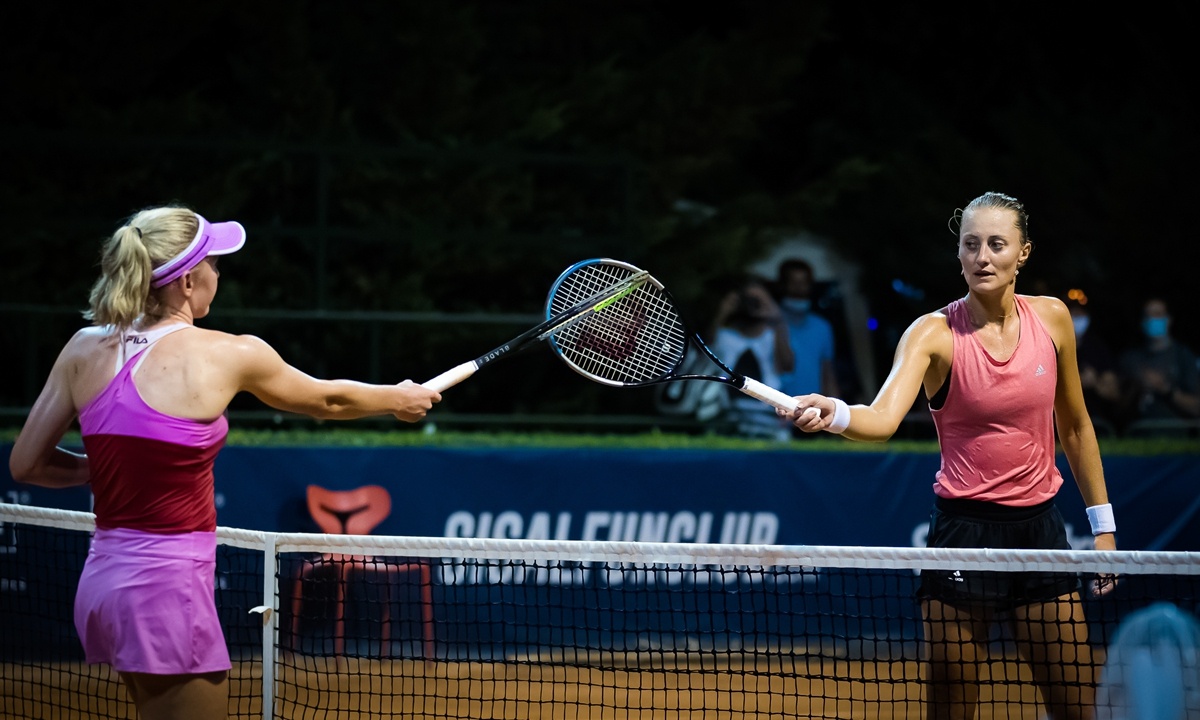 Ekaterina Alexandrova (left) and Kristina Mladenovic greet each other at the Palermo Ladies Open on Monday. (Photo: IC)

The stadium announcer at Palermo on Monday wished a warm and welcome return to tennis lovers as the WTA tournament in Italy started five months after the last one, with bottles of hand sanitizer attached to the nets.

The event comes just weeks before the US Open and Roland Garros double-­header but lost original top seed Simona Halep to lingering health concerns while an unnamed player withdrew from qualifying after testing positive for COVID-19.

There were some 350 fans allowed into a venue that normally holds 1,500.

Sofia Kenin and Elina Svitolina captured titles on March 8, the last day of competitive matches before the circuit was put on hold as the tennis calendar was shaken upside down.

The prestigious Indian Wells event in the California desert became the first competition axed due to the pandemic. The French Open was then moved to late September with Wimbledon cancelled for the first time since World War II.

When Croatia's Donna Vekic and the Netherlands' Arantxa Rus took to the clay-court late on Monday some 150 days after the sport's hiatus started they were not wearing face masks.

After Vekic won there was a ­video press conference where she told ­media she was happy to have remembered how to play tennis.

"It's weird, sometimes funny with all the protocols, masks on your face, visors and screens in the transport," she said.

"Of course it's necessary, but so different from before - it seems unreal," she said.

The line judges and umpire were masked and the players had to stand behind a social distancing line to approach them.

The stands in Sicily are cleared and disinfected after each match.

Players in the second meeting were told politely to wear their masks during the rest periods and to sanitize their hands from the dispensing ­bottles attached to the net poles.

There were hand gel bottles placed everywhere in the passages between the seats and in the entrances.

Hand shaking or hugging after the matches is forbidden with players tapping rackets over the net from a safe distance.

Top seed Petra Martic, who faces Alison van Uytvanck on Tuesday, said it was an honor to be back.

The men must wait until the Western and Southern Open - moved from its traditional Cincinnati home to New York - begins on August 22, after the tournament in Washington DC was called off.