SPORTS The 49ers play old-school football with a modern twist

The 49ers play old-school football with a modern twist 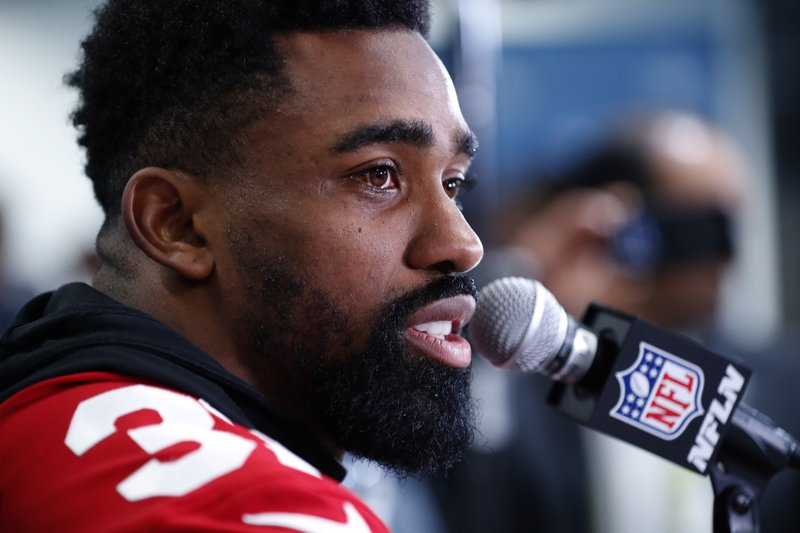 The San Francisco 49ers play old-school football with a twist.

“The more you see how people try to defend you and how people stop you, the more things you try to put in to counteract that,” Shanahan said.

San Francisco had the league’s No. 2 rushing offense in the regular season and it has been even better in the playoffs. Garoppolo threw only eight passes in the NFC championship game against Green Bay because he didn’t have to do much. Raheem Mostert ran for 220 yards and the Niners totaled 285 on the ground. They had 186 yards rushing in a playoff win over Minnesota.

“It’s more exotic smash-mouth because they don’t go right at you the entire time but they still want to pound you into submission,” Hall of Fame running back Jerome Bettis said.

Shanahan borrowed some of his dad’s ideas, adding his own flavor to the zone blocking system. Mike Shanahan won two Super Bowls with John Elway and Terrell Davis in Denver in the 1990s. Davis combined for 3,758 yards rushing and 36 touchdowns in those two seasons. The Niners don’t have one guy like Davis so they relied on Mostert, Tevin Coleman and Matt Breida. They also give the ball to some wide receivers more than other teams.

“They use deceptions with all kinds of motions, smokes, behinds and arounds to create backside issues,” Hall of Fame running back Marshall Faulk said. “They basically use old-school zone plays that his dad ran in Denver. I like the creativeness and the way he’s doing it and it doesn’t matter which back is back there, they’ll gouge you.”

The younger Shanahan has grown as a playcaller since he first arrived in San Francisco in 2017. He uses two backs often, including a fullback. But he’ll also call passes out of that formation to create disception.

“Our offense from my rookie year against Carolina is much different than what it is now,” tight end George Kittle said. “And, it’s really fun, too. Just being part of the evolution, how it’s grown and how it’s changed is really fun because you can look back, ‘Wow, man,’ that’s what we were doing and now we’re doing this stuff, and it was so much more fun.

“Playing with a group of guys, especially on the O-Line for going into our third year, I think helps guys execute all the stuff,” Shanahan said. “You can put in some new stuff and it doesn’t overwhelm the guys, and then just add in some of the speed element with all of our backs, a number of our receivers who have helped in the run game, not just blocking, but also that they’re a threat to get the ball out a lot of times. I think all that ties together.”

If the Niners can dominate on the ground against Kansas City and keep Patrick Mahomes on the sideline, that will boost their chances of winning the Super Bowl.