SPORTS The Fun Guy: Kawhi Leonard is the AP’s male athlete of 2019

The Fun Guy: Kawhi Leonard is the AP’s male athlete of 2019 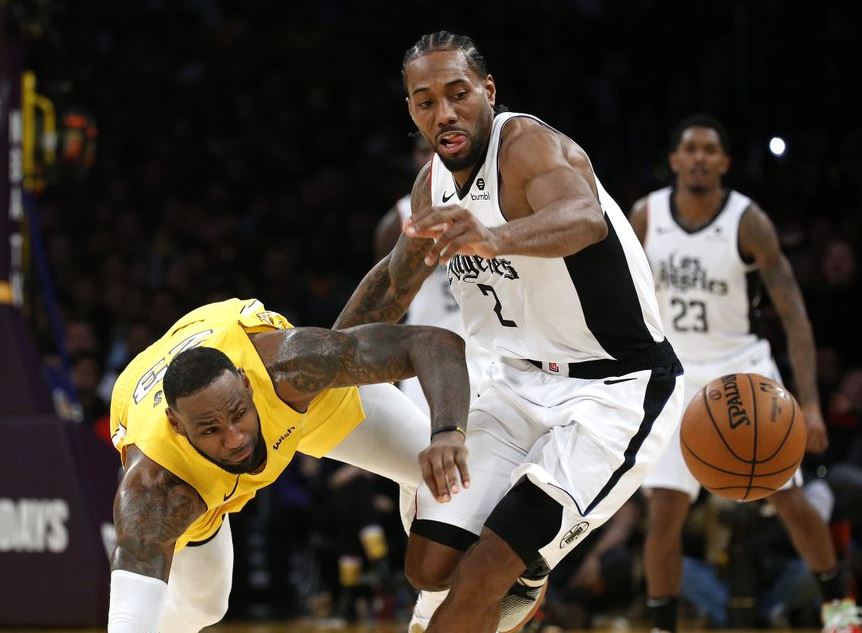 He was the Fun Guy. The board man who got paid. He overcame injury to reclaim his rightful place as one of the very best basketball players on the planet. He conquered the NBA world for a second time, bringing a championship to Canada. And then he joined the Los Angeles Clippers, ready to start anew.

For Kawhi Leonard in 2019, there finally is an answer to his infamous question: He did everything, without talking much.

Leonard was the NBA Finals MVP for the second time, leading Toronto to its first championship — five years after he first smudged his fingerprints on both trophies with the San Antonio Spurs. He wound up leaving the Raptors in the summer for the Clippers, returning to his native Southern California and turning the historically woeful franchise into one of the top teams in the league.

“The ride was fun,” Leonard said earlier this month on his return trip to Toronto, summing up his year with the Raptors. “I had a great time.”

By now, it’s no secret that Leonard is a man of few words.

He is not a man of few accomplishments.

He received more than twice as many points in the balloting as any of the other 18 vote-getters. Baltimore Ravens quarterback Lamar Jackson was second, followed by Kansas City Chiefs quarterback Patrick Mahomes, tennis star Rafael Nadal and reigning NBA MVP Giannis Antetokounmpo of the Milwaukee Bucks.

“Kawhi’s pretty steady,” said San Antonio coach Gregg Popovich, Leonard’s former coach with the Spurs. “He’s not a big talker. He doesn’t try to find the limelight or anything like that. He’s just a good guy who wanted to be good.”

Somewhere along the way, he became great.

Leonard was the best player in last season’s playoffs, after a regular season where he missed 22 games mostly because of what has become known as “load management” — the fancy term used on nights when he would sit out to rest. Leonard missed most of the 2017-18 season with the Spurs because of a complicated leg issue, and the NBA said last month that he is still dealing with “an ongoing injury to the patella tendon in his left knee.”

He was limping at times in the playoffs, but it didn’t matter. He averaged 30.5 points and 9.1 rebounds in the postseason, his 732 points in last year’s playoffs ranking as the third-most in any NBA playoff year. In the biggest times, he came up the biggest — 15 points in the fourth quarter to carry Toronto past Milwaukee in the series-turning Game 5 of the Eastern Conference finals, and 17 points in the fourth quarter of Game 4 of the NBA Finals against Golden State to put the Raptors on the cusp of the title.

And, of course, he made The Shot: the four-bounce-off-the-rim, at-the-buzzer jump shot from the corner to beat Philadelphia in Game 7 of the second round.

“Without a doubt,” Raptors coach Nick Nurse mused during the playoff run, “the best thing about this thing is that somehow I wound up on the sideline getting to watch this guy play up close.”

Leonard performed at that lofty level even while dealing with a major distraction. During the NBA Finals, it was revealed that Leonard filed a federal lawsuit against Nike and claimed the footwear and apparel giant was blocking him from using a logo that he believes he owns.

“There’s a lot of guys that are like, ‘Look, I’m going to find a way to win and in a seven-game series I’m going to get the best of you in the end,’” said Miami’s Jimmy Butler, who was with Philadelphia last season and saw up-close what makes Leonard tick. “But he’s definitely up there. Your respect just grows. Push, pull, whatever he’s got to do. ... He’s going to find a way.”

During the playoffs, Leonard’s “I’m a fun guy” quote that he offered on his arrival in Toronto became a meme and a marketing slogan. So did his “Board man gets paid” line. And after the Raptors won the title, Serge Ibaka’s video of Leonard went viral — they were in the back of a car, on the way to the parade, and Ibaka teed him up for the next unforgettable saying.

The answer was classic Leonard. Short, sweet, to the point.

“I’m playing to have fun and try to be the best player I can be,” Leonard said. “I’m happy with myself and what I have done in my career and I’m just going to keep on from there. It’s not about me being famous or want to have more fame than those guys. It’s about me playing basketball and having fun on the floor.”