SPORTS Tight end contracts could be next to see significant rise

Tight end contracts could be next to see significant rise 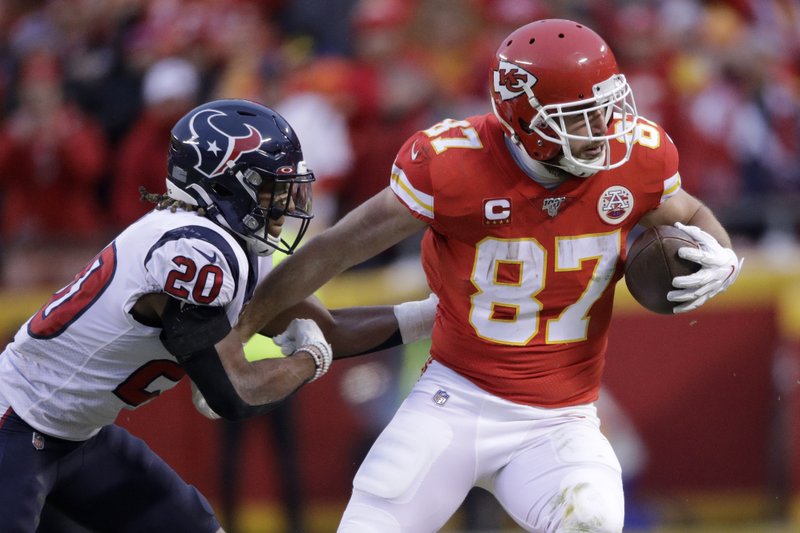 In this Jan. 12, 2020, file photo, Kansas City Chiefs tight end Travis Kelce (87) is tackled by Houston Texans safety Justin Reid during the second half of an NFL divisional playoff football game in Kansas City, Mo. Kelce has two years remaining on a five-year, $46.8 million extension that he signed in 2016. (Photo: AP)

Several tight ends in the NFL are centerpieces of the offense.

Guys such as George Kittle, Travis Kelce, Zach Ertz and Rob Gronkowski — before he sat out a year — are more productive than many wide receivers but make far less money.

The franchise tag for tight ends is $10.6 million. By comparison, it’s $17.9 million for wide receivers. Only running backs, at $10.3 million, have a lower number among non-specialists.

According to overthecap.com, 24 wide receivers have an average annual salary above $10 million while only two tight ends — Hunter Henry and Austin Hooper — make that much.

Kittle, Kelce, Ertz, Darren Waller and Mark Andrews led their teams in catches and yards receiving last season. They also play a position that requires them to block in pass protection and on running plays. Some, like Kittle, excel at it.

“In many cases, the tight end is much more critical to the offense than the wide receivers and in the case of Ertz, Kelce, Kittle and Gronk, those are franchise-type players who are arguably one of the best three players on the team,” agent Leigh Steinberg told The Associated Press.

Cooper caught 79 passes for 1,189 yards and eight touchdowns last season. But he was on the sideline, subbed out for Tavon Austin, on a fourth-down play with the NFC East title on the line in a loss at Philadelphia in December.

Kittle, Kelce, Ertz and Gronkowski, when he played in New England, would be go-to guys in a critical spot such as that.

Kittle had 85 catches for 1,053 yards and five TDs in 2019. He played more than 90 percent of San Francisco’s offensive snaps in 14 games, and 97 percent in the playoffs when the 49ers lost to Kelce and the Kansas City Chiefs in the Super Bowl.

“One, none of the top tight ends rarely ever make it to free agency because teams won’t them let go and, thus, as a position group, they lost the chance of resetting the market with their true value,” Bechta said.

“Two, the premium tight ends did contract extensions with anywhere from a year or two years left on their rookie deals. Because of that, they were forced to take steep discounts to their true value. Three, they used to be valued as a safety valve or a third option in the passing game but they’re not an accessory or complements to the playbook anymore.

Kittle, a fifth-round pick in 2017, has one year remaining on his rookie deal. Bechta declined to comment on contract discussions with San Francisco but all eyes will be on Kittle’s next deal.

“We are watching the George Kittle negotiations very closely because I think that will reset the bar for tight ends when his deal comes in,” said Drew Rosenhaus, who represents several tight ends, including Gronkowski, Greg Olsen and Jonnu Smith.

Considering his value to San Francisco’s offense, Kittle’s asking price could be close to Cooper’s deal. Even when he’s not catching passes, Kittle improves the offense. The Niners averaged 5.1 yards per rush on 458 run plays when Kittle was on the field last year vs. 3.4 when he wasn’t on for 129 run plays.

Kelce has two years remaining on a five-year, $46.8 million extension that he signed in 2016.

Ertz has two years left on a five-year, $42.5 million deal that he’s already restructured. He turned down an extension last season that would’ve made him the highest-paid player at his position but didn’t offer sufficient guarantees.

Gronkowski, who joined Tom Brady in Tampa Bay, is entering the final year of the deal he signed with the Patriots. Olsen signed a one-year, $7 million deal with Seattle. Smith has one year left on his rookie deal with Tennessee and Rosenhaus anticipates he’ll become a breakout player.

“You saw the market start to change with Hooper,” said Justin Schulman, who represents Andrews, a Pro Bowl pick in his second season with the Ravens. “Tight ends have been behind and now they’re going to start catching up. This position is probably the next to explode with guys like Andrews, Kittle, Kelce, Ertz.”