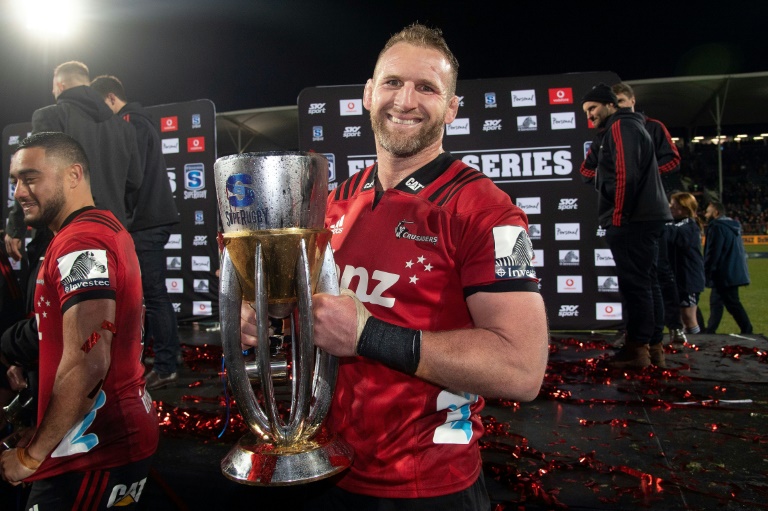 Canterbury Crusaders' Kieran Read holds the Super Rugby trophy after winning the 2019 final against Jaguares. But after 25 years the viability of the competition in its current unwieldy format straddling 16 time zones is again being questioned. (Photo: AFP)

Super Rugby marks its 25th anniversary this year still struggling to establish a stable identity and with calls for the unwieldy competition across 16 time zones to be scrapped.

Staging a multi-national tournament from South Africa to New Zealand every weekend was always going to be fraught with problems even before Argentina joined, and the governing body SANZAAR has never found an acceptable solution.

Perhaps the best answer, according to South African-born former All Blacks great Andrew Mehrtens, would be to scrap the tournament and start all over again without South Africa and Argentina.

"If we push into Asia, if we can develop a competition that's in the same time zone I think it's going to be a better product," the former All Blacks fly-half said.

"We need to drop South Africa. As much as I love South Africa, logistically it's a pain, and the same with Argentina."

The problem is highlighted by the Wellington Hurricanes' start to this season.

Following their final warm-up game in Auckland last weekend, they play in South Africa on Saturday, travel on to Argentina the week after and play their third match the following week back in New Zealand.

Super Rugby was born in 1996 as a 12-team competition with franchises in New Zealand, Australia and South Africa playing in a round-robin competition with the top four advancing to semi-finals.

In 2011, in an attempt to make more money from broadcasters, it was expanded to 15 teams divided into three national conferences under a complicated system in which teams did not play all the other sides.

It was further enlarged to 18 teams in 2016 and spread over 16 time zones with the addition of a sixth South African side as well as the Sunwolves from Japan and Argentina's Jaguares making it bewildering for even diehard fans to keep up with the action which was taking place at all hours.

The flaws in the conference system were immediate, especially in 2017 when the Golden Lions were ranked the top team for the play-offs despite having not faced a New Zealand team.

When it came to the crunch they lost the final at home to the Canterbury Crusaders.

Another rethink saw two South African and one Australian side axed in 2018. The widely criticised conference system will be scrapped for next season, as will Japan's Sunwolves.

SANZAAR's prime concern now before the next edition is to generate public interest after crowds fell markedly in recent years and television audiences flattened out.

They need impressive data to put to the broadcasters as deals are renegotiated, but the only definite number they have is that there will be less content in 2021 when the tournament drops from an 18-week regular season to 13.

In its early days, Super Rugby was uncomplicated and even though it was professional there was still an amateur feel.

Flanker Daniel Braid, who played for the Auckland Blues when they won the title for the third and final time in 2002, recalls "training in public gyms, waiting for regular punters to finish their bench presses before we could jump on".

It was a world far-removed from the high-tech facilities of modern teams, coupled with scientifically managed workloads, in no small part financed by broadcast income.

In Australia, Fox has already warned rugby executives that it is on a cost-slashing campaign with Rugby Australia chief executive Raelene Castle pinning her hopes on a competitive tendering process to negotiate an improved broadcast deal for the next five years.

"We believe that we have more than one party that's prepared to step forward and have a serious look at the rights for rugby," Castle said.

Mehrtens believes the Australian situation is further reason to end Super Rugby with South Africa and Argentina peeling off to join tournaments more closely in line with their time zones.

"We're up against big northern hemisphere economies in Europe and England, so Australia being strong as a rugby brand is important to New Zealand as well," he said.

"Australia has a bigger economic footprint into Asia and I'm fully of the belief that's our future getting into that market there and helping develop that."