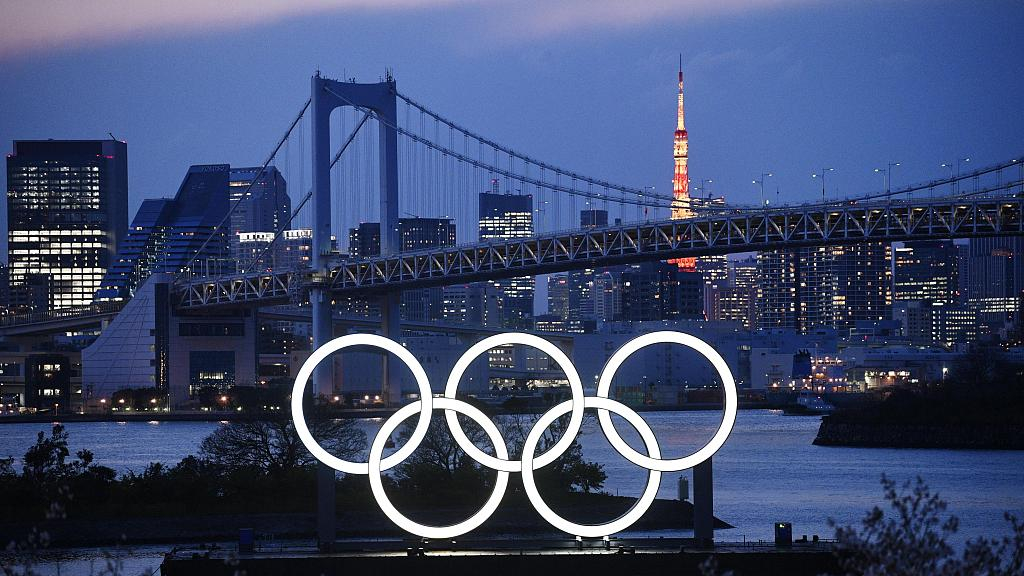 The Olympics rings are lit up in Tokyo's Daiba waterfront area against the backdrop of Rainbow Bridge and Tokyo Tower in the capital of Japan, March 23, 2020. (Photo: VCG)

TOKYO, April 23 (Xinhua) -- Tokyo 2020 CEO Toshiro Muto said here on Thursday that they do not have a back-up plan for further postponement or cancellation if the Olympic Games cannot be held in 2021.

He told reporters at an online briefing, "We have been asked this question by many people already. Tokyo 2020 will host the Olympic and Paralympic Games from July to September 2021. We are making steady efforts to prepare for the Games.

"This is the stance we have taken and this is the answer."

Prime Minister Shinzo Abe declared a state of emergency for Tokyo, Osaka and five prefectures two weeks ago and then expanded it to the entire nation on April 16.

A male employee with the Tokyo 2020 was confirmed on Wednesday to have tested positive for COVID-19, raising further concerns over whether the Games could be held after being postponed by one year.

"Nobody can predict when the virus will be ending," Muto said. "We have enough time until July next year. I think the Japanese government and governments from other countries in the world will overcome the virus."

"Prime Minister Abe proposed to postpone the Games within one year's time. He believes that the nature of the Olympic Games will be changed if it is postponed by two years."

Muto said the infected employee, who is currently recuperating at home, had been working at home two weeks before and only a few number of people had in close contact with him.

"Over 90 percent of the staff are working at home and I think the remote work is functioning well."

On the controversial statement in the IOC's website on the additional cost, Muto said both sides had a telephone discussion but he did not reveal whether the IOC had made an apology.

"The webpage is inappropriate," he said. "It was deleted. We exchanged views by phone. The IOC addressed the issue quickly."

The IOC prompted fury from Tokyo 2020 with a Q&A post, declaring Japan will cover the costs caused by the postponement. Tokyo 2020 reacted angrily and requested the IOC to remove the content.

Muto said both sides will continue to hold discussions on this issue.