The good news for the Tokyo Olympics is that Japan on Sunday held a one-day exhibition gymnastics meet in front of several thousand fans with 22 athletes participating from Russia, China and the United States. 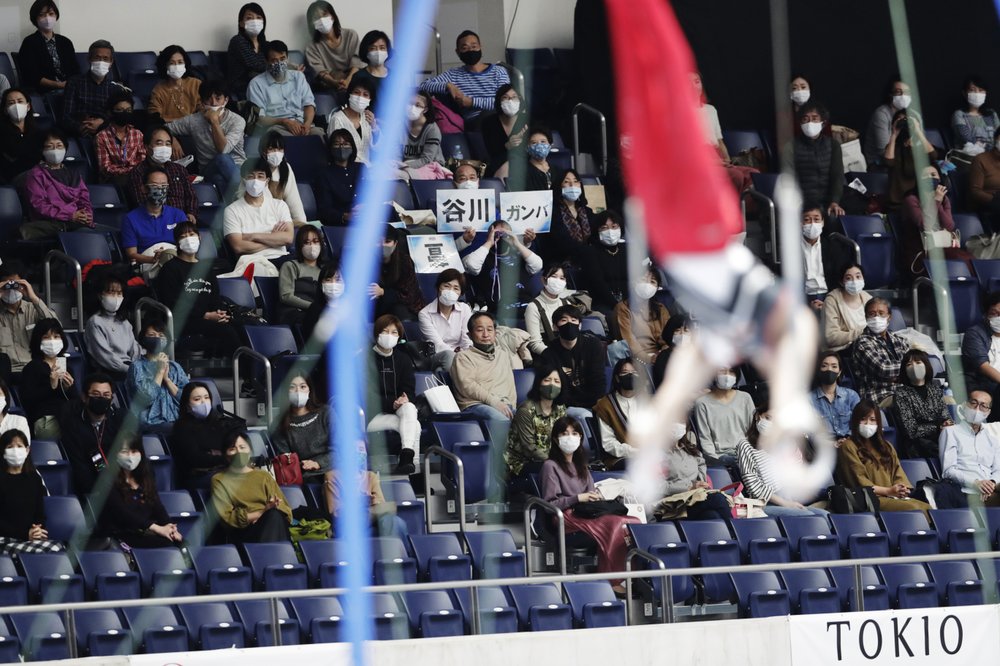 Audience members cheer for Wataru Tanigawa of Japan as he competes in the rings during an international gymnastics meet in Tokyo on Sunday, Nov. 8, 2020. (Photo: AP)

They were joined by eight from Japan.

The non-Japanese entered after a 14-day quarantine at home and were largely kept penned up in their Tokyo hotel in strict isolation. They also underwent PCR tests daily in Japan.

The event is the latest — a Japanese baseball stadium was filled to capacity last week — intended to show that the postponed Tokyo Olympics can open in just under nine months.

But there are more difficult numbers that the Olympics must overcome.

Next year’s Games will involve 11,000 athletes from 206 nations and territories, all affected differently by COVID-19. Add to this 4,400 more Paralympians and thousands more officials, judges, VIPs, media, broadcasters and sponsors who will also need to enter Japan.

Will tens of thousands of non-Japanese fans be allowed to attend, or will the Games be for only Japanese spectators?

Tokyo organizers and the International Olympic Committee have given few details and concrete plans are not expected until next year when a vaccine and rapid testing might be available to resolve some problems.

“Unfortunately, 80% of the Japanese don’t believe that the Tokyo Olympics can take place as a result of the COVID-19 pandemic,” he said, speaking after the meet in Japanese on a public-address system to fans in the Yoyogi National Stadium. He was also addressing his fellow athletes.

“I know it is natural to think this way,” he added. “But I would like people to change their minds from: We can’t hold the Olympics to how can we do it?”

Uchimura pointed out that many athletes had not been able to practice and many have gone the entire year without any competition.

If the Olympics happen, these will not be Olympics like any other. Rules will be strict. Travel will be limited. And despite all the precautions, some athletes are bound to get COVID-19 and be removed from the competition. IOC President Thomas Bach and Vice President John Coates have acknowledged this.

Japan is officially spending $12.6 billion to organize the Olympics, although a government audit last year said it was twice that much. All but $5.6 billion is public money.

Over and above this, estimates suggest the postponement will cost another $2 billion to $3 billion. The University of Oxford published a study in September showing these are the most expensive Summer Olympics on record.

Just over 1,800 people in Japan have died from COVID-19. Japan has controlled the virus better than most, although Prime Minister Yoshihide Suga warned Friday of a resurgence of the coronavirus in Japan. The northernmost island of Hokkaido also raised warning levels last week.

Gymnastics organizers also said the southern Japanese city of Kitakyushu will hold the 2021 world championships in artistic and rhythmic gymnastics on Oct. 17-31.

Fans entering the stadium, which was the venue for swimming in the ’64 Olympics, had temperatures taken and hands sanitized. Seating was spread out and everyone wore masks, a standard practice everywhere in Japan. And cheering was not allowed.

“My only problem is my life inside the hotel,” Angelina Melnikova, who won silver at the 2016 Olympics in Rio de Janeiro, said before the meet. “I was surprised that I couldn’t walk freely — even inside the hotel. I wanted to have a tour of Tokyo. But it’s impossible to do that this time. I totally understand.”