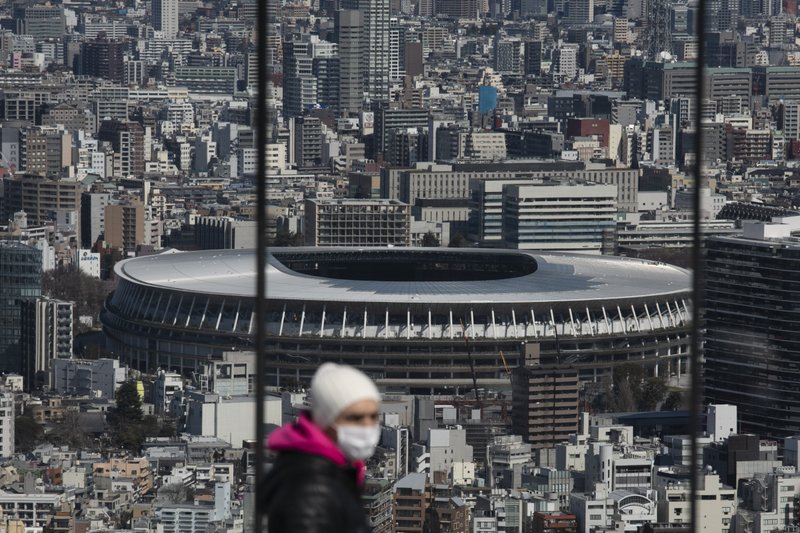 In this March 3, 2020, file photo, the New National Stadium, a venue for the opening and closing ceremonies at the Tokyo 2020 Olympics, is seen from Shibuya Sky observation deck in Tokyo. The Tokyo Olympics were postponed a month ago. But there are still more questions than answers about the new opening on July 23, 2021 and what form those games will take. (Photo: AP)

The Tokyo Olympics were postponed a month ago. But there are still more questions than answers about the new opening on July 23, 2021, and what form those games will take.

In the face of the coronavirus pandemic, will the Olympics really start in 15 months? If so, in what form? With fans? Without fans? Can they open without a vaccine? TV broadcasters and sponsors provide 91% of the income for the International Olympic Committee. How much pressure will they exert on the form these Olympics take? What about the Beijing Winter Olympics, opening in February 2022. China is where the coronavirus was first discovered, and the authoritarian government has been draconian in terms of lockdowns and travel restrictions.

IOC President Thomas Bach has already said there is “no blueprint” in assembling what he called this “huge jigsaw puzzle.”

“I cannot promise ideal solutions,” he said. “But I can promise that we’ll do everything to have the best possible games for everybody.”

Q: Some scientists are skeptical the delayed Tokyo Olympics can open in 15 months. What are the prospects?

A: Many scientists believe an Olympics with spectators can’t happen until a vaccine is developed. That is probably 12-18 months away, experts say, and then there will be questions about efficacy, distribution, and who gets it first. Kentaro Iwata, a Japanese professor of infectious disease, said last week: “I am very pessimistic about holding the Olympic Games next summer unless you hold the Olympic Games in a totally different structure such as no audience or a very limited participation.” Yoshitake Yokokura, president of the Japan Medical Association, came to the same conclusion in a recent interview. An Olympics in empty venues is looking more likely, which is the scenario for many sports. Fans hungry for some action may have grown accustomed to this configuration by the time the Olympics arrive.

Q; Postponing the Olympics will be costly. Who will pick up the expenses?

A: In two words: Japanese taxpayers. Japanese organizers and the IOC have said they are “assessing” the added costs. They have not ventured an estimate — at least not publicly. Estimates in Japan range from $2 billion to $6 billion. Host country Japan is bound by the terms of the Host City Contract signed in 2013 to pay most of the bills. The IOC has already said the delay will cost it “several hundred million dollars.” IOC member John Coates, who oversees preparations for Tokyo, said this money will go to struggling international federations and national Olympic committees, and not to Japan organizers. The bills keep piling up. Japan originally said the Olympics would cost $7.3 billion. Officially the budget is now $12.6 billion, although a national audit board says it’s twice that much. All but $5.6 billion is public money. And now come the costs of the delay. Tokyo organizers were upset last week with the IOC. On its website it had Prime Minister Shinzo Abe saying Japan would pick up the added costs. The IOC deleted the statement, even though in principle it is correct.

Q: Where do we stand with venues and the Olympic Village?

A: Not much word so far. CEO Toshiro Muto has said it will take time to see if all these venues can be used. Of course, some may require renegotiated contacts. Proprietors of all venues will be under tremendous pressure to cooperate so the original competition schedule can be maintained. Tokyo’s Big Sight convention center is likely to remain the media center. Muto said it has been configured for the Olympics and hinted it would likely stay that way. The Olympics draw 11,000 athletes from 206 nations. The Paralympics add 4,400 more.

Q: What about tickets?

A: Organizers have said they will try to honor tickets already purchased. Officials say a total of 7.8 million are available. Organizers budgeted $800 million in revenue from ticket sales, and unprecedented demand has pushed that to $1 billion. That’s roughly 15% of the $5.6 billion of the privately funded operating budget. This income can’t be sacrificed with the bills piling up. Same is true for $3.3 billion sold in local sponsorships. The problems will arise if ticket holders are not allowed to attend and want refunds. Tickets carry a “force majeure” clause, which might free organizers from the obligation to provide refunds. However, it’s not clear that COVID-19 will stand up as a justification.

Q: How reliant is the IOC on income from broadcasters and sponsors?

A: A massive 91% of IOC income is from those two sources — broadcasters and sponsors — and 73% is from broadcasters. Bach has said the IOC does not have “cash flow” problems, and the committee reportedly has a reserve fund of about $1 billion. But it stages only two events every four years, almost the entire source of its $5.7 billion income in a four-year cycle. It’s not like a soccer or baseball league with thousands of matches. It needs the Summer Olympics. American broadcaster NBC pays more than $1 billion to air each Olympics. The IOC will push the Olympics to go forward, in whatever form.

Q: Where is the Olympic flame, which arrived from Greece on March 26?

A: It was taken off public display earlier this month in Fukushima prefecture, located 250 kilometers (150 miles) northeast of Tokyo. Muto said after the Olympic torch relay was canceled that “the Olympic flame was put under the management of Tokyo 2020. Obviously in the future there is a possibility it might be put on display somewhere. However, for now it is under the management of Tokyo 2020 and I’m not going to make any further comment on the issue.” There are suggestions the IOC is thinking of taking the flame on a world tour, hoping to use it as a public-relations tool and a symbol of the battle against the virus. However, any tour would be impossible until travel restrictions are lifted. Taking the flame away from Japan could also upset the hosts. China took the flame on a world tour in 2008, which was met with protests over China’s human rights policies. At the time IOC President Jacques Rogge said the “crisis” threatened the Olympics. World tours with the flame have not been held since.