World No.1 Iga Swiatek crashed out of the Australian Open on Sunday with a 6-4 6-4 defeat by Wimbledon champion Elena Rybakina. 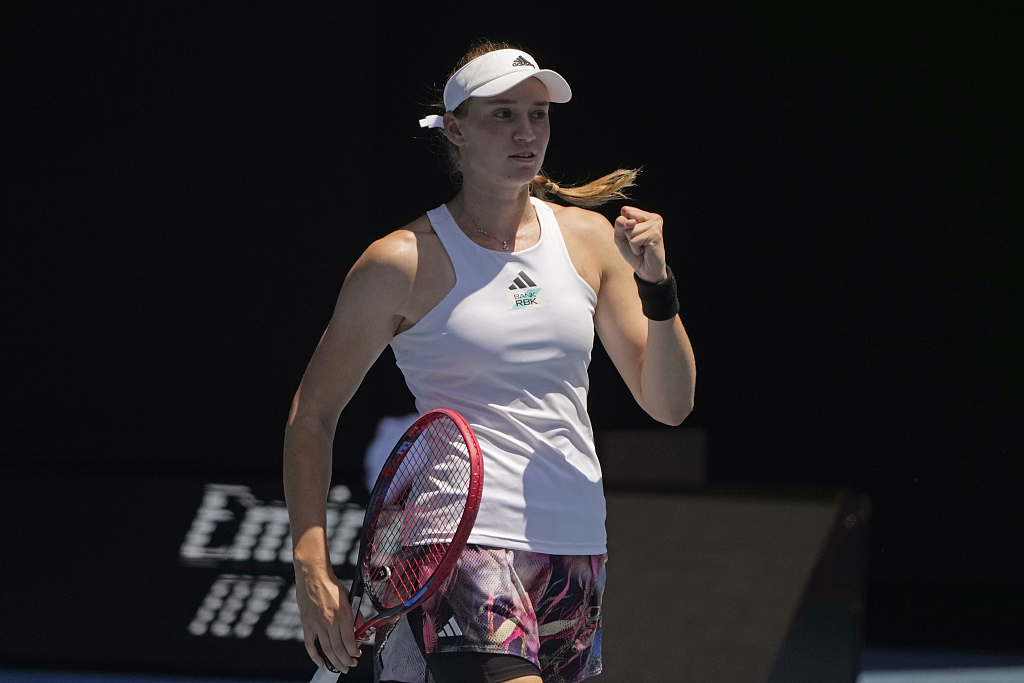 Elena Rybakina of Kazakhstan celebrates after defeating Iga Swiatek of Poland during their fourth round match at the Australian Open in Melbourne, January 22, 2023. (Photo: CFP)

Kazakhstan's Rybakina advanced to the quarter-finals of the season's opening Grand Slam for the first time. The 22nd seed will face Latvia's Jelena Ostapenko will next face Jelena Ostapenko, who beat Coco Gauff 7-5, 6-3.

Swiatek, the reigning French Open and U.S. Open champion, got off to a rough start, surrendering her opening service game after receiving a warning from the chair umpire over the time she took for her pre-match preparations.

She fought back to level the score by the fourth game but Rybakina would break again, clinically punishing the Pole's second serve to take the opening set.

Swiatek looked to have recovered after she rattled off three straight games at the start of the second set behind a more aggressive forehand, only for Rybakina to haul herself level with another break of serve.

Rybakina broke Swiatek again at 4-4 in the second set before holding her own serve in convincing fashion to close out the match.

Meanwhile, a frustrated Gauff broke down in tears after her defeat, as the 18-year-old American said she just could not come up with the answers to Ostapenko's game.
Gauff came into the tournament having enjoyed a superb 2022 where she reached the French Open final but it was former Roland Garros champion Ostapenko who dominated the contest.

"I think every loss is somewhat in my control because I do feel like I'm a good player, but today she just played better," Gauff, seeded seventh, told reporters.

"There were moments in the match where I was getting frustrated because I normally can problem solve but today I feel like I didn't have much answers to what she was doing.

In the women's doubles event, China's Yang Zhaoxuan and Chan Hao-ching from Chinese Taipei made it to the last 16 as they defeated Cristina Bucsa/Makoto Ninomiya 6-3, 6-3, while Zhang Shuai and Haddad Maya lost to Czech duo Miriam Kolodziejova/Marketa Vondrousova who came from behind 6-3, 6-7, 6-7.