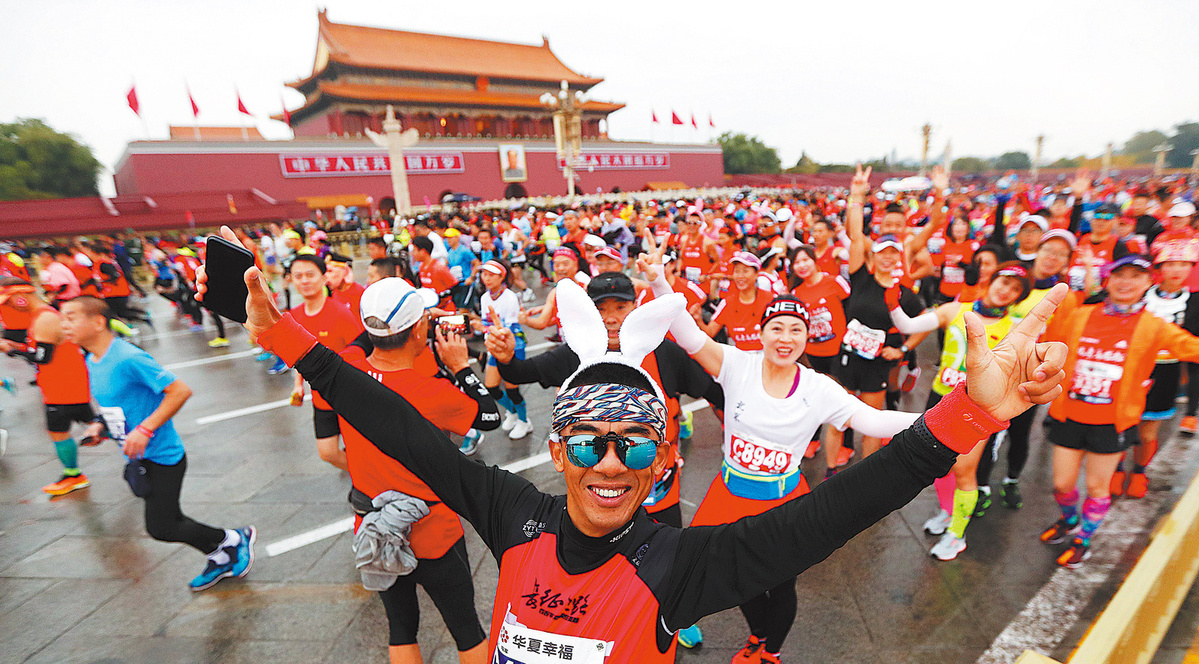 Last year's Beijing International Marathon attracted over 30,000 participants, but it remains to be seen whether the race will go ahead as scheduled this November, with organizers awaiting the green light for mass-gathering events to resume from authorities amid the coronavirus pandemic. (Photo: CHINA NEWS SERVICE)

With races suspended and outdoor exercise limited, the coronavirus pandemic has put the brakes on China's previously booming marathon industry as event organizers struggle to make ends meet during the crisis.

The sparse turnout of runners at north Beijing's Olympic Forest Park these days bears witness to the slump. What few runners do venture out all don masks and keep their distance from each other on a track which would usually be thronged with fitness enthusiasts at this time of year.

Despite the successful containment of the outbreak in China, fears over the potential risks of mass gatherings clearly remain within the running community, while the virus-enforced business shutdown has posed a severe challenge to organizers and promoters involved in the sport.

According to the Chinese Athletics Association, 93 CAA-registered road races, including full-length marathons and shorter-distance events, have been canceled or delayed across the country since the governing body issued a ban on such events on Jan 23 in accordance with nationwide virus-prevention measures.

Event organizers are struggling to survive through the crisis with the majority of their revenue streams from race registration, sponsorship and government funding all dried up.

Some of the marathon sector's major players, such as Hong Konglisted Wisdom Sports Group, have had to significantly cut staff salaries to deal with the mounting financial pressure.

Even with the country downgrading COVID-19 emergency levels to boost the economy, the struggle for race organizers doesn't look like it will ease any time soon, according to Song Hongfei, a senior vice-president of Wisdom Sports.

"Actually, there is not much time left for the entire year of 2020 to get our business back on track," Song was quoted in a recent Xinhua report.

"It takes at least three months to organize a running race, but we still see no signs of the government easing restrictions on mass sporting events like marathons at the moment.

"We've prepared for the worst-case scenario of having no races allowed to be held throughout this year."

Beijing was among a number of major cities to last week announce that certain types of public and commercial outdoor sports venues will gradually be reopened－on condition that operators maintain strict virus-prevention measures and guarantee at least 2.5 square meters of space for each exerciser.

However, facilities for activities involving body contact and big crowds won't be allowed to open for business any time soon, the Beijing Municipal Sports Bureau has stressed.

"Any irresponsible action found against the epidemic control and prevention policies will result in severe penalties. The health of the public is the top priority," Yang Haibin, a deputy director of the bureau, said at last week's media briefing.

Last Thursday's cancellation of the 2020 Chengdu Panda Marathon showed that local governing bodies and organizers remain vigilant against the virus despite a growing urge among the running community to get back to normality.

"It's been a tough waiting game for everyone and even fatal for some of the smaller players," said Liu Wei, general manager of Jiangsu Sports Marketing Co Ltd, one of the biggest marathon operators in Jiangsu province.

"The epidemic caught the business in the traditional peak season for road races. Our loss over the past two months is estimated to be as big as half our entire year's revenue."

According to the 2019 China Marathon Report, published by the CAA last Friday, last year's spring season (March-May) saw 564 races held to make it the second busiest period on the country's race calendar behind Oct-Dec.

Now with this year's entire spring schedule wiped out, industry experts reckon that businesses face a daunting second half of the year even if races are allowed to resume.

"Due to the delay of events originally scheduled in the first half, the number of races will skyrocket in the second half if the government gives the green light," said Chen Guoqiang, a sports sociology researcher at Shanghai University of Sport, in a column on shobserver.com.

"Event organizers will have to compete harder against each other to attract enough runners, sponsors and media exposure to make their races profitable."

"The rising public awareness of embracing a healthy lifestyle will only be strengthened after the coronavirus crisis," Bao said during an online forum earlier last month.

"For the long term, the rebound in sports participation and consumption will be a very likely scenario and it will definitely help grow the market for running events."

According to CAA statistics released on Friday, a total of 1,828 long-distance running races were held in the Chinese mainland last year, up from just 21 similar events in 2011. These events attracted about 7.13 million runners on a 22 percent year-on-year increase from 2018.