SPORTS Transfer of England winger will dominate next window

Transfer of England winger will dominate next window 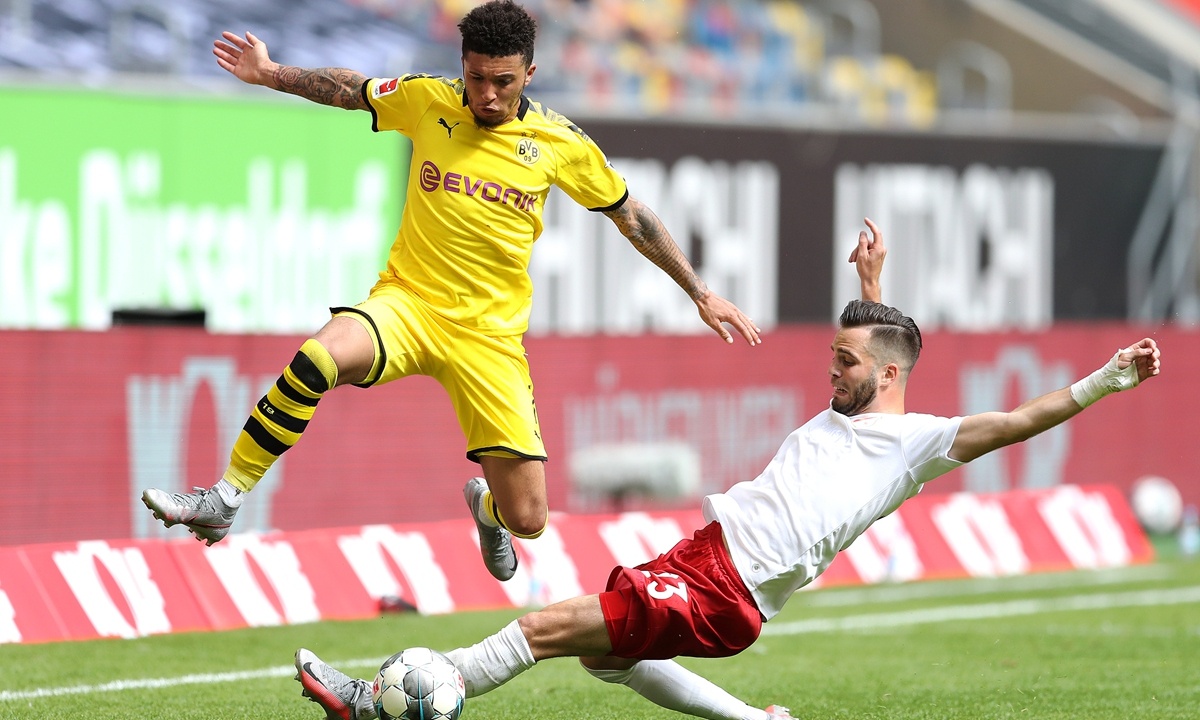 "If Jadon comes up to us and says he absolutely wants to leave - which has not been the case so far - and a club wants to pay what we want, then we will discuss it," Borussia Dortmund  CEO Hans-Joachim Watzke told German media outlet Sport1 about the possibility of England winger Jadon Sancho leaving the club.

"I don't think a club will pay the sum," Watzke said of their 109 million pound asking price. "There is also no coronavirus discount on him. We have left the period where we had to sell players. I don't think there will be a summer transfer."

"We have a more unusual situation next year than usual," he added. "With the exception of Achraf Hakimi, the team will stay together. That helps with development."

Watzke, who also called a transfer for January signing Erling Braut Haaland "completely out of the question," has made his position clear but that has not stopped the Sancho speculation with Manchester United widely regarded as the most likely destination for the 20-year-old.

The Old Trafford side, who lost out to Dortmund when it came to the signing of teen striking sensation Haaland from Red Bull Salzburg and are set to lose out to them again when it comes to the highly rated England youth international midfielder Jude Bellingham from Championship strugglers Birmingham City, are expected to play hardball with the Germans.

Britain's Sky Sports reported earlier this month that Manchester United remain keen on signing Sancho but will only offer 50 million, less than half of Dortmund's valuation for their rising star.

Former Manchester United defender Gary Neville laughed at the prospect when he was on commentary duties for his ex-team's 3-0 win over Brighton & Hove Albion.

"I think you'll have to pay a little bit more than that Ole," Neville said of his former teammate and the club's current manager Ole Gunnar Solskjaer. "Some clubs will believe other clubs will get desperate and sell players on the cheap," Neville added. "But I'm not sure you can bully clubs like Dortmund."

Perhaps not but it is likely that their mettle is tested with a bid.

Sancho's current deal runs until 2022 and they face losing one of the most valuable prospects in world football for free if he runs that down.

That means either a move in the window at the end of the season or the next winter window and, coronavirus discount or not, the price will dwindle as the months remaining on his contract count down.

They might not need to worry, though, according to reports from German outlet Bild who said that Manchester United will pay the asking price - 109 million - in full if they qualify for the UEFA Champions League. The English club have their destiny in their own hands.

Although they dropped two vital points in their race for the top four by drawing 2-2 at home to Southampton, thereby missing the chance to leapfrog both Chelsea and Leicester City to go third in the process, they do face the Foxes on the final day and can still reach the top four.

Aside from that they are also in the UEFA Europa League and there is a UEFA Champions League spot set aside for the winners.

Sancho wants Champions League football, according to reports in the German media. If United can secure it then he would consider a move, they say. That's understandable.

The Germans ran Bayern Munich close for the Bundesliga title but in Europe they blew a great chance to go through against Paris Saint-Germain after beating them at home in the first leg.

Germany has been good for Sancho but a return to England seems the next step for a player who came through the Watford academy, where he spent seven years, before moving to Manchester City in 2015. He moved to Manchester as a 14-year-old and his talent was no secret, often regarded as one of the brightest prospects in a glittering Etihad Academy.

Sancho swapped City's youth setup for Dortmund in 2017 after the 17-year-old prioritized first team football, signing for them on the deadline day of the summer transfer window. A reported 8 million fee was all it took to move Sancho to Dortmund and it was a sign of how highly rated he was that the winger was handed the No.7 shirt.

It was January when he finally began to make his presence felt in the starting lineup, playing three full games in a row for the side before an injury in the fourth of that run, when he came off the bench, kept him out. That debut season saw Sancho play 12 times for Dortmund, with his only goal coming in a 4-0 win over Bayer Leverkusen.

His second season was much more successful. Sancho scored 13 times in 43 games for the Germans during 2018-19 and also made his first appearance for Gareth Southgate's full England side - donning his first cap for a Nations League game with Croatia.

This season Sancho has cemented his reputation as one of the most highly rated players in Europe with this season seeing a remarkable run of form. He has scored 17 goals in the Bundesliga and laid on 16 more, with a first career hat trick coming against Paderborn last month.

Sancho was a key part of England's FIFA Under-20 World Cup victory in September of 2017 despite being called back by Dortmund after the group stage. He had already shown his importance at the European Under-17 Championship in May 2017 and taking Manchester City to the FA Youth Cup final.

Now he can expect to challenge for silverware at senior level wherever he goes next. Whether that is Manchester, at either United or a return to City, or his hometown of London, where Chelsea are reportedly interested in reuniting him with former Dortmund teammate Christian Pulisic, the future is bright for the winger.