Two-time Olympic champion is still enjoying life in the saddle 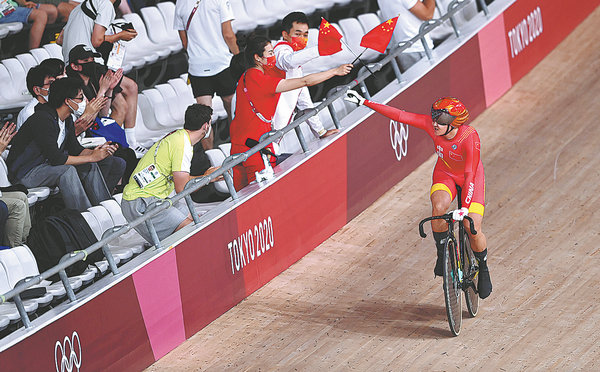 Zhong Tianshi greets the crowd after she and a teammate win gold in the women's team sprint at the Summer Olympics in Tokyo on Aug 2, 2021. Photo/Xinhua

Paddy fields are turning from green to yellow this month in Haishen village, in the suburbs of Shanghai. Zhong Tianshi, a two-time Olympic track cycling champion, loves riding a bicycle across the farmland. Her red suit and the golden paddy fields form a unique scene.

"Whenever I feel tired or depressed, I find inner peace and coziness here," says Zhong.

Following her gold-medal finish at the last Summer Olympics in Tokyo, Zhong took a hiatus from competitions and devoted her time to charity work at an animal nursery and in areas such as pandemic prevention and control and public transport security education.

"Whichever job I do, they have one thing in common — creating positive vibes for society."

But it is in the velodrome that Zhong is best known.

Five years later, Zhong and Bao Shanju wore the helmets named Feng Ming, literally "the call of the phoenix", and won gold in the women's team sprint at the delayed 2020 Olympics in Tokyo.

But, at the time, few knew that Zhong had suffered a serious injury in 2019, which cast a shadow over her cycling career. In a team trial before the 2019 World Championships, Zhong fell off her bike, sustaining three broken ribs and several hairline fractures.

Zhong believes that her comeback story represents "nirvana of the phoenix" spirit, which in traditional Chinese culture means a rebirth after great pain and transmigration.

"After winning the championship, I was calm rather than excited. All the hardships and setbacks I had endured became worthwhile," says the 31-year-old.

With two Olympic gold medals and a handful of world titles, Zhong is arguably China's most successful cyclist. She showed a talent for cycling from young age. "It took me 20 minutes or so to learn how to ride a bike. I was only 3 or 4 years old at the time," recalls Zhong.

For years, pedaling in the countryside was a pastime for Zhong until, at age 12, she was spotted by Wang Haili, a cycling coach at a school in Shanghai's Pudong New Area, and she started professional training. Her progress was so rapid that one year later, she was finishing among the top eight at national youth competitions.

At the 2009 UCI World Youth Championships, Zhong clinched her first title on the world stage, winning the women's 500-meter time trial. Soon after that, she was selected for China's national team.

Thanks to Zhong's Olympic success, Haishen village has seen 8 kilometers of cycling path built in Huinan township, where Haishen village is located, and bicycle-themed sculptures and decorations can be seen in the fields.

"Track cycling is not a popular sport. I hope more Chinese will join in and discover its charm," says Zhong.