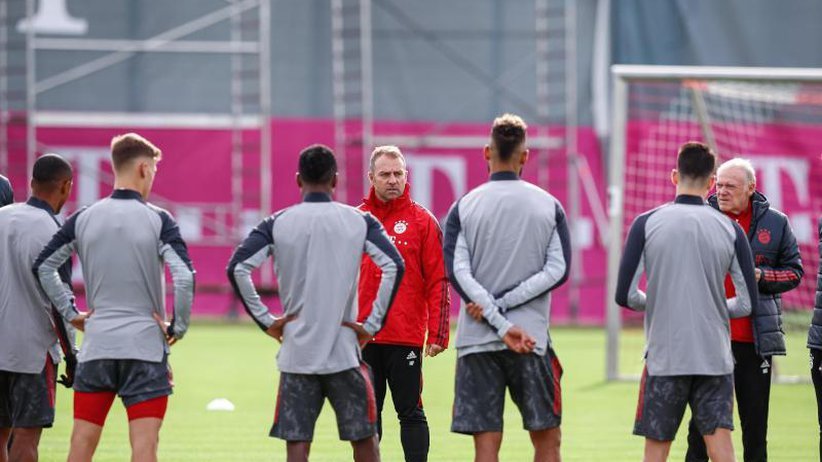 Hansi Flick (C), manager of Bayern Munich, trains with his team at the Saebener Strasse training ground ahead of their UEFA Champions League Group A game against Atletico Madrid, October 21, 2020. (Photo: VCG)

When Bayern Munich won last season's Champions League in August, it was something of an inevitability. The game against Paris Saint-Germain wasn't smooth sailing yet even a loss wouldn't have tainted their reputation as clearly being the best club team in Europe as they had steamrolled everyone on their way to the final, including the now infamous 8-2 mauling of FC Barcelona.

When Hans-Dieter "Hansi" Flick was appointed as Bayern manager on November 3, 2019, a "new manager bounce" was expected. After all, the side had been floundering under Niko Kovac, so the only way could be up; what nobody really expected was for Bayern to bounce up into the stratosphere.

Since Flick arrived last year, the team have won 39 games, lost only three times and drawn exactly once, and the Champions League victory joined a romp through the Bundesliga and the DFB-Pokal (German league cup) to bring the team a historic treble. 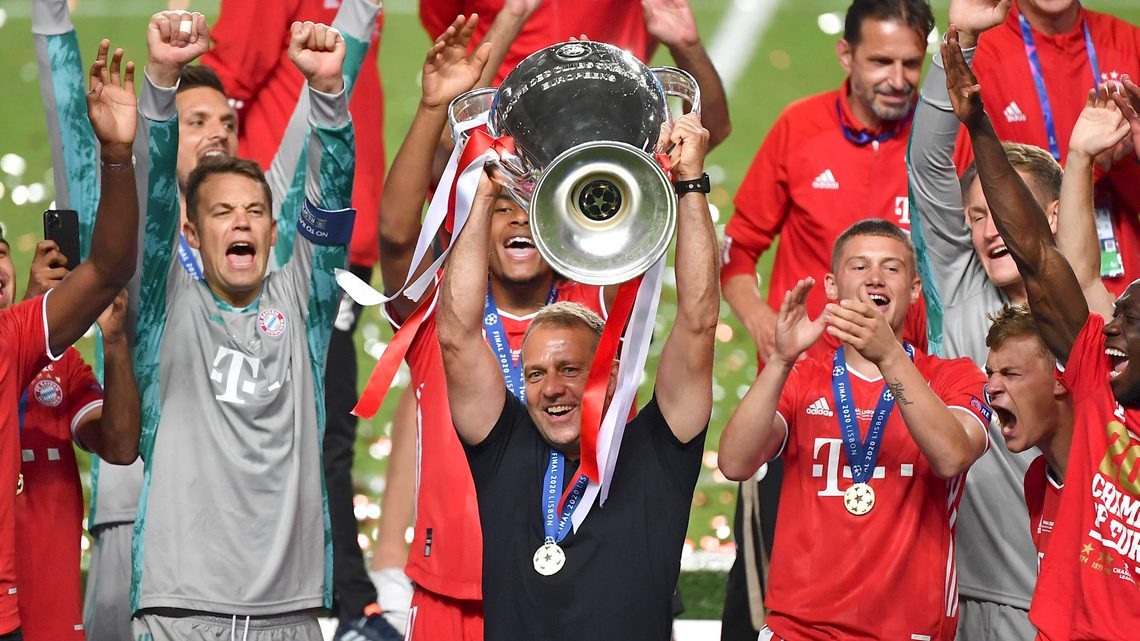 Flick's aggressive style of play and the overall team consistency made Bayern look like they would rule the roost for years to come, and normally they would, but this is 2020. The COVID-19 pandemic has turned football on its head and, for Bayern, that has played out in a heavily foreshortened season.

There was less than a month between their Champions League win last season and the start of this new one and Bayern Munich's fatigue has showed, most notably in a shock 4-1 loss to TSG 1899 Hoffenheim on September 27. Not only that but last week, the team had two games in 48 hours: a DFB-Pokal game on October 15 and then a Bundesliga game on October 17.

This would be fine if Flick had a squad he could rotate through but this summer's transfer window has sapped the Bayern bench. The main loss is midfield maestro Thiago who has moved to Liverpool. Ivan Perisic and Philippe Coutinho returning to their home clubs doesn't help in that area either, especially when the big signings – Leroy Sane, Douglas Costa, Eric Maxim Choupo-Moting – are all attackers. Plus, Serge Gnabry, the team's second highest scorer behind Robert Lewandowski last year, has been ruled out of the game due to testing positive for COVID-19. 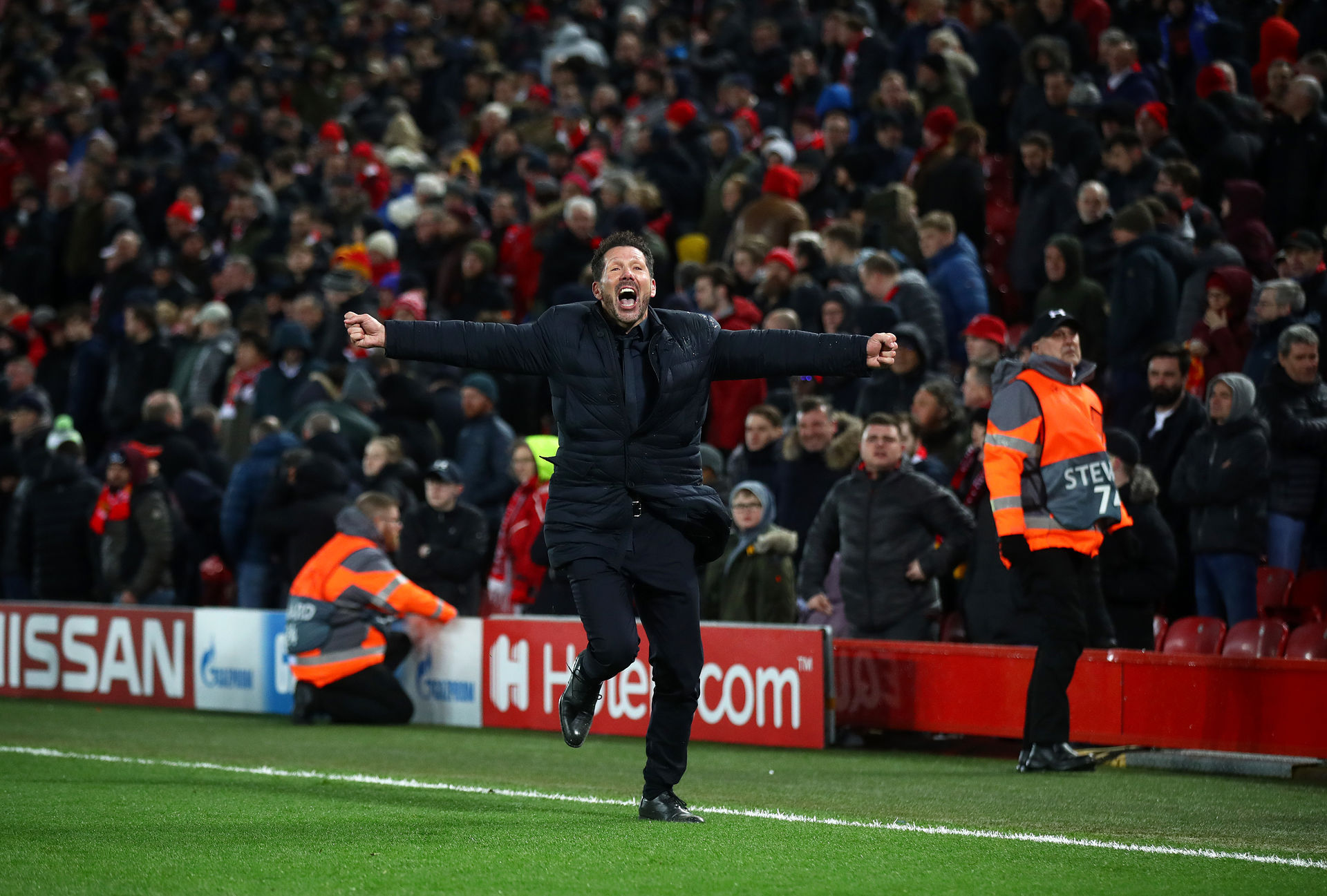 Diego Simeone, manager of Atletico Madrid, celebrates his team's victory over Liverpool in the UEFA Champions League Round of 16 game at Anfield in Liverpool, England, March 11, 2020.

This puts Bayern at a severe disadvantage in tonight's game against Atletico Madrid; not because of the type of weakness but simply because it is a weakness. If there's one manager in all of football who loves to exploit the flaws of opponents, it's the cruel and callous Diego Simeone.

Atletico's previous Champions League campaign shows how tactically villainous he can be. Against defending champions Liverpool, once his team took the early lead in the first leg, Atletico played to maintain it by any means necessary. Ten men behind the ball, cynical fouls, possession for the sake of possession; his Atletico will do anything to grind out a result. And now, with the arrival of ex-Barcelona man Luis Suarez, Simeone has a player as notoriously black hearted as himself.

After that sensational defeat of Liverpool, Atletico went on to lose to RB Leipzig in the knockout quarterfinals, demonstrating that their tactics are an all-or-nothing gamble. Against a massive side like Bayern Munich, it's a risk, but it could also be their key to victory.