UFC champ Zhang returns to China after extended US stay 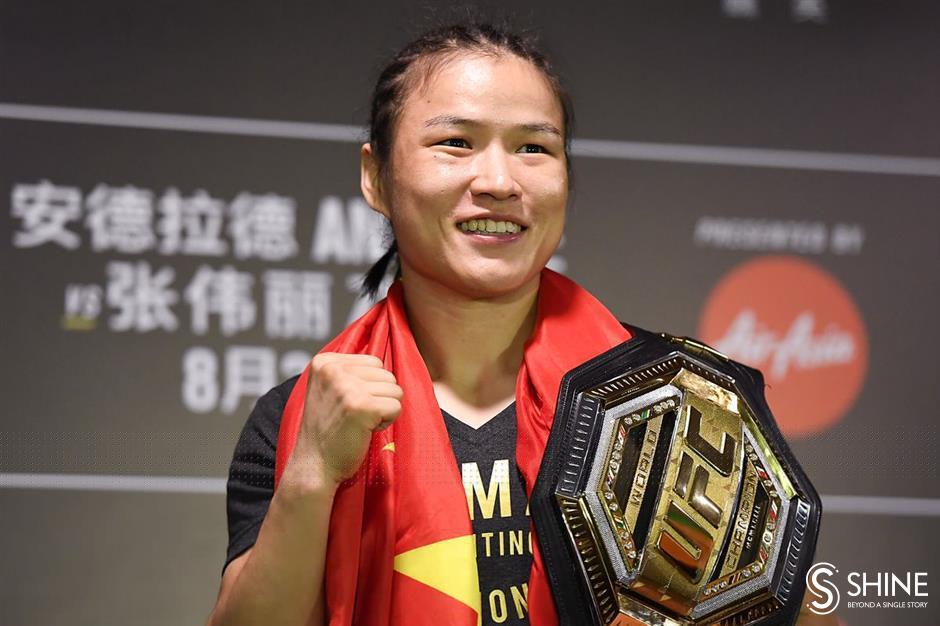 Reigning UFC Women's Strawweight champion Zhang Weili returned to China on Sunday, after being stranded in the United States for over a month due to the global COVID-19 outbreak.

"I can't wait to go back to my homeland! I was too excited to sleep last night," Zhang wrote on her WeChat social media account.

But with worldwide COVID-19 containment measures currently restricting international travel, Zhang had to endure a lengthy journey in order to travel to the US and defend her crown.

"I can still remember the morning call we received at 10 o'clock on February 1. UFC told us that if we weren't able to catch a flight to Thailand, we wouldn't be able to go to America later," recalled Zhang.

The US announced on January 31 that it would bar entry to most foreign nationals who had recently visited China.

"I was so anxious but couldn't do anything else. So my team and I had to hurry and grab some clothes and essentials. We had no idea when we would be able to return home."

Two hours later, Zhang and her whole team were on the way to the airport. It took weeks for Zhang to travel from China to Thailand, then to Abu Dhabi, United Arab Emirates, and finally to America.

"It was a tough and unforgettable journey. After traveling for more than two months, I really missed my home."

She could have spent the next month sharing her joy with her family but "missed the best chance" due to her packed post-fight schedule.

"We really looked into all the plans but chose to stay here and not risk piling more pressure and danger, not only to us, but also to all the people who were already fully stretched by COVID-19," Zhang wrote in her diary.

Zhang and her team rented a house in Las Vegas and kept on training there.

"We hardly went out. Thanks to my lovely Chinese neighbor. Though we had never met before, she sent us some rice and masks because we couldn't find them anywhere," said Zhang.

Fans also sent her training equipment to help her maintain form and fitness.

"I felt so touched by people's kindness and friendliness, especially during such hard times," she added.