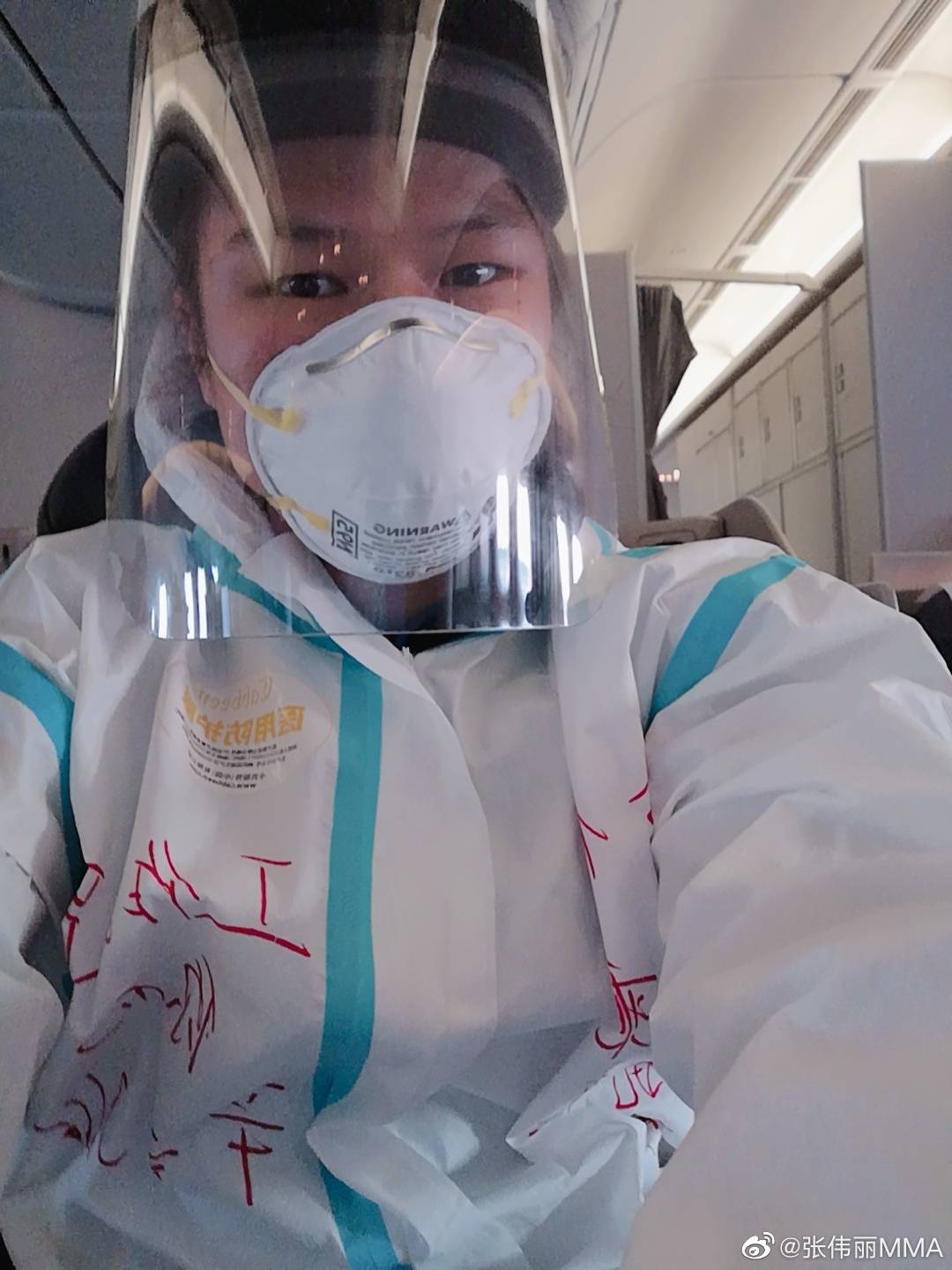 Zhang Weili wear protective cloth and face shield during the flight back to China. (Photo: Weibo account of Zhang Weili)

BEIJING, April 21 (Xinhua) -- UFC Champion Zhang Weili is in a 14-day mandatory isolation at a hotel in Tianjin, China, after being stranded in U. S. more than 40 days ago.

"Everything was fine on our way back home. Temperature was normal. Though it's really a little bit boring here in a hotel, I feel safe now," said Zhang during her online broadcast on Tuesday.

The 29-year-old was crowned China's first ever UFC champion in August 2019, and defeated Joanna Jedrzejczyk in Las Vegas last month to retain her strawweight belt.

Zhang could hardly sleep because of the excitement for going back home. Her team got up at four o'clock and drove five hours to travel to Los Angeles, United States. During the 13-hour flight, the whole team were protected from head to toe.

"I didn't drink or eat anything before arrive at hotel on Monday evening. Everyone on the plane and in the airport were very nice and said 'welcome back home' to us. I can tell that everything was well prepared and arranged to protect us. I was so moved."

She wrote down her appreciation on her protective suit with a red marker.

"I felt more like a challenger rather than a defender this time. It was a bumpy road. I felt like riding a most crazy roller coaster that I've never experienced before," commented Zhang.

Before her glory time inside the cage, with worldwide COVID-19 containment measures currently restricting international travel, Zhang had to endure a lengthy journey in order to travel to the U.S. and defend her crown.

UFC made a morning call to Zhang on February 1 that if she wasn't able to catch a flight to Thailand, she wouldn't be able to go to America later.

"UFC also told me that the match can be canceled. But I don't want to give up my game. I never will," said Zhang, "What doesn't kill you make you stronger, right?"

But jet log did almost kill her. It took weeks for Zhang to travel from China to Thailand, then to Abu Dhabi, and finally to America.

"I couldn't sleep tight for two weeks. Every morning when I woke up, I need to tell myself again and again: you trained really hard for this fight. You can do it! You must do it!"

Until the moment she stood in the cage, her mind was dizzy and blank.

Though she defended her crown, Zhang felt lost and guilty not only for failing herself, but also for failing those who expected more from her.

"Next time, I want to present a brand new me to my opponent and my fans," said Zhang, who added that she can't wait to add more traditional Chinese martial arts to her arsenal once her isolation ends.